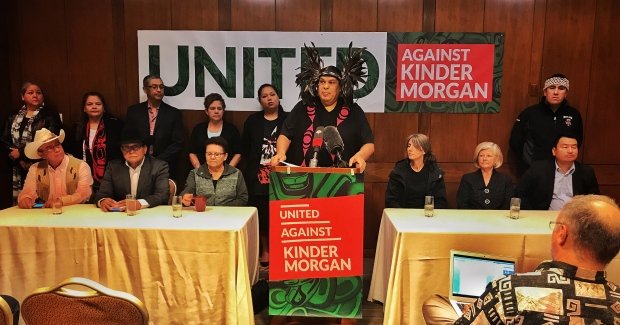 First Nations, environmental groups and local governments appeared in the Federal Court of Appeal in Vancouver Monday continuing their fight against the expansion of the Trans Mountain pipeline.

Chief Ian Campbell of the Squamish First Nation says the federal government failed to consult or gain consent of First Nations for the expansion of the oil pipeline, so they have little choice but to try to protect their land and water in the courts.

“Sixty years ago when this project was established, we had no legal recourse. That era has come and gone in this country,” he said.

“We’re going to demand a higher bar of engagement that leads to true environmental assessments that look to First Nations consent.”

Seven First Nations, the cities of Burnaby and Vancouver, and two environmental groups are asking the court to overturn the federal government’s decision to approve the expansion of the $7.4-billion pipeline from Edmonton to Burnaby.

Both the B.C. and Alberta governments are interveners in the court action, on opposing sides of the argument.

A decision against the project would send it back for assessment, a move that would cause lengthy delays.

It is rare for Canada’s judiciary to review pipeline approvals.

The last such review, heard in 2015, led to the rejection of  Enbridge Inc’s Northern Gateway pipeline by the federal government.

The trial is expected to last about two weeks.