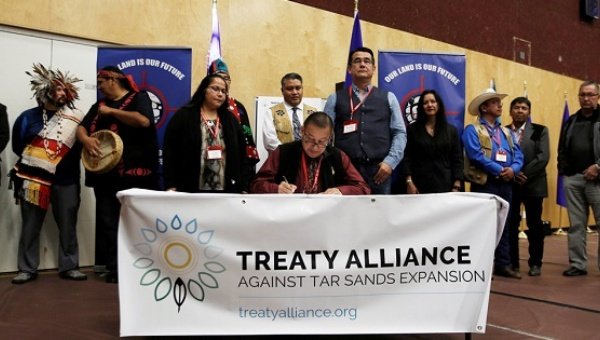 September 22, 2016, Montreal/Vancouver—First Nation and Tribal Chiefs gathered today in Musqueam Territory (Vancouver) and Mohawk Territory (Montreal), to sign a new continent-wide Indigenous Treaty — the Treaty Alliance Against Tar Sands Expansion — that commits already some 50 First Nations and Tribes from all over Canada and the Northern US to working together to stop all proposed tar sands pipeline, tanker and rail projects in their respective territorial lands and waters.

The First Nations and Tribes are committed to stopping all five current tar sands pipeline and tanker project proposals (Kinder Morgan, Energy East, Line 3, Northern Gateway and Keystone XL) as well as tar sands rail projects such as the Chaleur Terminals Inc. export project at the Port of Belledune in New Brunswick.

“What this Treaty means is that from Quebec, we will work with our First Nation allies in BC to make sure that the Kinder Morgan pipeline does not pass and we will also work with our Tribal allies in Minnesota as they take on Enbridge’s Line 3 expansion, and we know they’ll help us do the same against Energy East.” said Kanesatake Grand Chief Serge Simon.

The Treaty states: “Our Nations hereby join together under the present treaty to officially prohibit and to agree to collectively challenge and resist the use of our respective territories and coasts in connection with the expansion of the production of the Alberta Tar Sands, including for the transport of such expanded production, whether by pipeline, rail or tanker.”

“We are in a time of unprecedented unity amongst Indigenous people working together for a better future for everyone,” said Rueben George of the Tsleil-Waututh Sacred Trust Initiative. “The Kinder Morgan pipeline proposal in our territory represents an unacceptable risk to the water, land and people: we are proud to stand together with all of our relatives calling for sensible alternatives to these dangerous projects.”

“The Yinka Dene have already shown in the case of Enbridge’s Northern Gateway that a pipeline cannot hope to pass through a unified wall of Indigenous opposition,” said Carrier Sekani Tribal Chief Terry Teegee. “You will now see the same thing play out with all other tar sands pipelines, including another failed BC pipeline – Kinder Morgan.”

Tar sands development has already poisoned the water of First Nations in Alberta and beyond and these new tar sands pipelines, trains and tankers would threaten the water of many more Nations. Indigenous Peoples are also suffering intense impacts from climate change in the form wildfires and floods and the ongoing climate emergency is now threatening many of the plants and animals that lie at the heart of Indigenous cultures.

“Indigenous people have been standing up together everywhere in the face of new destructive fossil fuel projects, with no better example than at Standing Rock in North Dakota,” said Grand Chief Phillip, President of the Union of BC Indian Chiefs. “We know that infrastructure that expands the tar sands is both incompatible with reducing Canada’s emissions and completely irresponsible.”

Vice-Chairman of Standing Rock Sioux Tribe, Jesse McLaughlin, stated “We are standing with our Indigenous tribes as they stand with us in solidarity.”

The Treaty provides that Indigenous Nation signatories also want to be partners in moving society onto a more sustainable path. Already, many Indigenous Nations are leading the way in developing renewable energy projects on their territories.

“We want to work with the Prime Minister and the government to develop a sustainable economy that does not marginalize our people,” said Grand Chief Derek Nepinak of the Assembly of Manitoba Chiefs. “This is a time of great spiritual awakening for our peoples as we reinvigorate our Nations and ensure a better tomorrow for all.”

Please go to treatyalliance.org for more information, including for an always updated list of signatory Nations