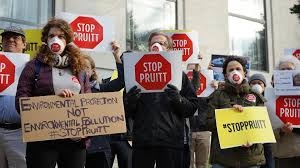 A sweeping US government report on the state of climate-change science is nearing the finish line, but researchers who wrote it aren’t ready to relax just yet. Federal scientists have twice reviewed the roughly 600-page document — which examines everything from shifting weather patterns to rising sea levels — as have the US National Academies of Sciences, Engineering, and Medicine. Just one hurdle remains, but it may be the highest: final sign-off by top officials in President Donald Trump’s administration, many of whom are sceptical of climate science.

Although there have not yet been any signs of trouble, researchers are keeping a close eye on how the White House and federal agencies handle the science report — a technical prelude to the fourth National Climate Assessment, a legally mandated analysis of the causes and impacts of global warming that is due in 2018.

Many climate scientists are particularly uneasy about the potential for interference by the US Environmental Protection Agency (EPA), one of 13 agencies that must approve the science report before its expected release in November. EPA administrator Scott Pruitt, who rejects well-established climate science, has raised the possibility of organizing an adversarial ‘red team–blue team’ review of such research. And he has help from the Heartland Institute, a think tank in Chicago, Illinois, that promotes scepticism about climate change.

“We can’t allow science to be held hostage,” says Donald Wuebbles, a climate scientist at the University of Illinois at Urbana-Champaign and co-chair of the report. “I’m hopeful it won’t get to that, because it would look really bad for the administration to fight this.”

It wouldn’t be the first time that a Republican president had sought to stymie the United States’ national climate-assessment process. The administration of George W. Bush came under fire for ignoring the first National Climate Assessment, which was released by then-President Bill Clinton in 2000. After the Bush administration subsequently missed the legal deadline in 2004 to complete a second assessment, environmentalists sued the government in federal court to compel the report’s release — and won.

“This is going to be the first big test in the climate arena,” says Tammy Dickinson, who led the energy and environment division at the White House Office of Science and Technology Policy (OSTP) under president Barack Obama. One major issue, she adds, is that Trump has yet to fill many positions at the OSTP — which has coordinated work on the last three government climate assessments — or high-level science posts at federal agencies that work on climate change.