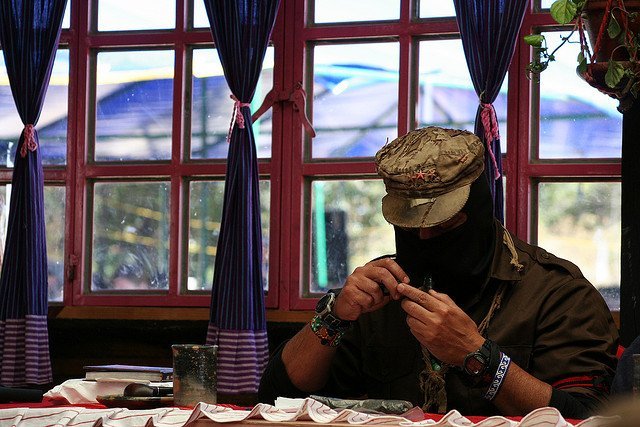 Subcomandante Marcos of the Zapatistas no longer exists: “We think one of us must die so Galeano can live. So death does not take a life but a name.”

“At 2:08 am on May 25, 2014, at the southwestern combat front of the EZLN, I declare that the one known as Subcomandante Insurgente Marcos no longer exists,” he said in an enigmatic — as usual — communiqué in his first public appearance since 2009.

“So, now he is… gone? Like… gone for good?” my friends immediately started asking me.

Well… I don’t know. The Zapatistas, and Subcomandante Insurgente Marcos himself, have never ceased surprising us. However, what I do know is that their words, just like their actions, have always been a bit enigmatic and need deciphering.

That I will try to do with this article.

It all began on May 2, 2014. Members of the paramilitary organization CIOAC-Histórica, funded and organized by the regional and national government, planned and executed a coward attack on the Zapatista autonomous community of La Realidad. They destroyed the autonomous school and clinic and, knowing that the compas from the nearby caracol would rush in to stop them, they ambushed them. Fifteen Zapatistas were injured, and one of them, Jose Luis Solis Lopez, a teacher at the Escuelita Zapatista of August 2013 and December/January 2014, was brutally murdered. He had selected for himself the nickname “Galeano”, like the author of The Open Veins of Latin America.

This attack was the last straw in a series of similar attacks on Zapatista communities that have been taking place ever since the government of Enrique Peña Nieto took office — a sign of the President’s intentions towards Zapatismo and the Zapatistas.

Ever since that day, an international campaign has been organized in solidarity with the Zapatista communities, which culminated on May 24 in the caracol of La Realidad with a public event in which the Comandancia General of the EZLN also participated to honor the memory of Galeano and assure that justice will be done.

“We think that one of us must die so that Galeano can live,” he said. “So death does not take a life but a name.”

Adopting the nom de guerre of a fallen comrade is nothing new in Mexico’s revolutionary history, nor in the history of the EZLN itself. It’s actually a tradition, for the fallen comrade not to be forgotten but rather to “live on” through the adopted nom de guerre. Let’s not forget, for example, that Pancho Villa — to talk about the Mexican Revolution of 1910 — was born Doroteo Arango. Pancho Villa was a fallen comrade of his, killed by the village guards, and Doroteo adopted his friend’s name for him to continue to live in death.

The nom de guerre “Marcos” is just such a case. Mario Marcos was a member of the FLN, the mother-organization of the EZLN, who also happened to be a beloved friend of the Subcomandante, and according to the Sup’s own testimony, the man who used to teach him Mexican history on their long clandestine journeys. Marcos was killed in 1983 in Puebla, and his friend and comrade — who until then was called “Zacarias” — adopted his name as nom de guerre and became the one who until May 25, 2014 we used to know as Subcomandante Insurgente Marcos. And who from now on will be known as Subcomandante Insurgente Galeano.

However, if we read Marcos’ last communiqué — and the first of Galeano — we will see that the change is not only one of names. It is also one of strategy and content. When the EZLN took five municipalities in Chiapas on January 1, 1994, the world came to know the mysterious masked Subcomandante Insurgente Marcos as its spokesperson. That, however, was not the plan. The EZLN did not intend the world to see a mestizo, a Mexican of mixed blood, at the head of an indigenous army. For that, an indigenous Zapatista had been selected to be spokesperson. Unfortunately, he died shortly after the attack and Marcos took over the role of spokesperson, with huge success. Seeing the fascination of the Mexican and international media with the mysterious persona of Marcos, the EZLN decided to take advantage and “use” this allure in order to attract more and more attention and stay in the spotlight.

The strategy was not without its costs, however. The catapulting forward of Marcos actually produced a boomerang effect: the movement became personalized in the persona of Marcos, and the biggest achievement of Zapatismo as such — the autonomous, leaderless communities — remained in the shadow. The EZLN realized that “the movement became Marcos” and “Marcos became the movement,” and they have long been trying to find a way to tackle that — to the extent that they even deliberately fuelled rumors of Marcos’ serious illness that circulated for the past few years. In one of the last communiqués about a future Zapatista event (which has now been suspended because of the murder of Galeano) Subcomandante Moisés wrote that Subcomandante Marcos would also be there “if his health permitted.”

“It is our belief and our practice that in order to rebel and struggle, we need neither leaders, nor caudillos, nor messiahs, nor saviors. To struggle, we only need a little bit of disgrace, a good amount of dignity and a lot of organization. The rest is either useful for the collective or it isn’t,” reads the last communiqué.

And that appears to be the real reason why Subcomandante Insurgente Marcos chose to cease to exist. Because now, in Chiapas, there are people who have learned how to govern themselves in an autonomous, horizontal way. There are children who have studied in autonomous schools, patients who have been treated in autonomous clinics, women who are no longer considered inferior to men. And all this should be known to the world without the distraction of the persona of Marcos.

So what will Subcomandante Insurgente Galeano do now? What will be his role in the movement? Well… nobody knows, except for the EZLN and Subcomandante Galeano himself. And when they choose to reveal it, we will know as well.

So… Subcomandante Insurgente Marcos is leaving, and with him so will Don Durito and Old Antonio, to keep him company.

“He won’t be missed by the children who — back in the days — would get together to hear his stories; now they are grown-ups, now they have judgement, now they fight just like everybody else for freedom, democracy, and justice, as is the task of every Zapatista.”

P.S.1 Some of those kids who could not come all the way to your lands but who would still read all your stories, translated into other languages, at night-time in their beds, are also grown-ups and now fight for democracy, freedom and justice. In other lands, and in other languages maybe, but as is the task of every Zapatista.

P.S.2 However… they will still miss you.