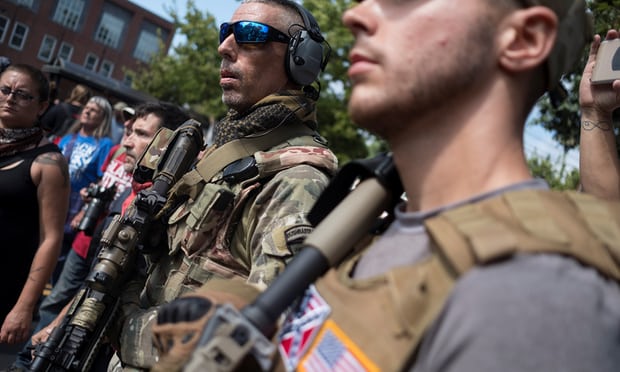 The memoirs of Union general William Tecumseh Sherman make uncomfortable reading. In among the battle orders and the racist depiction of freed slaves, he switches occasionally to reminiscences of the post-war era, and amicable meetings with former Confederate enemies. Over cards and supper, he accepts their assurance that, if anybody ordered the massacre of all-black units during the fighting, it wasn’t them.

Sherman opposed the emancipation of the slaves, sabotaged his own troops efforts to free them and used slave labour on his fortifications. Yet he did one thing that, in light of the fascist march in Charlottesville, we can learn from today. He waged total war on his enemies. He ordered his troops to rip up miles of rail track, torch the farms of slave-owners who resisted and burn Atlanta. Then he set off for the sea, pledging famously, that since war was the remedy the south had chosen, “I say let us give them all they want.”

Nobody, seeing the militias parading with assault rifles and Kevlar this weekend, wants the US to descend into conflict. But the low-level political violence and severe cultural dislocations of the US today contain obvious parallels with the years before the American civil war.

As the historian Allan Nevins observed, by the late 1850s white America had become “two peoples”, whose radically different cultural identities could no longer be contained in one polity.

Then, the “two peoples” were shaped by rival economic models: industry and the free market versus sharecropping and slavery. But the concepts the Confederates took into battle with them have survived: states’ rights versus the federal government; white supremacy; the concept of an ethnically defined nation with a destiny nominated by God.

And they have not survived by accident. The statue of Confederate commander Robert E Lee, which Charlottesville’s city council voted to remove, is one of a string of monuments that have become icons of resistance for the rightwing cultural movement now energised by Donald Trump’s victory.

Nathan Bedford Forrest, the southern cavalry commander who massacred black soldiers and went on to found the Ku Klux Klan, is celebrated not only by an official statue in Memphis, but an unofficial gold one on private land in Nashville, surrounded by Confederate flags. Forrest was a military genius whose guerilla tactics are studied in US military academies to this day. But so was Wehrmacht Field Marshal Erwin Rommel. They were both fighting for genocide and racial supremacy.

So with Confederate flags mixed with swastikas on the streets of Charlottesville, it is not just the US but progressive people across the world who have to ask a tough question: what are we prepared to do to defeat the racist right?

They have declared cultural war on us. “This entire community is a very far-left community,” Jason Kessler, the organiser of the Unite the Right march, told the media, adding that Charlottesville’s residents had “absorbed these cultural Marxist principles advocated in college towns across the country, about blaming white people for everything.”

That is not a cry for help or a petition for reform: it is an expression of exactly the same kind of cultural hostility to modernity that you find in the writings of the south’s political leaders. They regarded any demand for black equality before the law as “Jacobin” – the 19th century equivalent of Marxism. They, too, saw the elevation of black people to the status of human beings as the harbinger of their civilisation’s end.

And it is not just a few thousand sad teenagers in pressed polo shirts we are dealing with. All post-election studies showed Trump’s electoral coalition was energised by giving millions of people permission to express their racism and violent misogyny. By electing Trump, his supporters declared cultural war on liberal, progressive US and told those insisting “Black Lives Matter” that they did not.

Trump’s radio silence over the killing of Heather Heyer, allegedly by white supremacist James Alex Fields, is no accident. There are those with links to the far-right on his own team, including Steve Bannon and Sebastian Gorka. His entire movement relies on energising racism, not suppressing it. It was after all New Yorker Carl Paladino who said Michelle Obama should “return to being a male and let loose in the outback of Zimbabwe where she lives comfortably in a cave with Maxie, the gorilla”.

During the final year of the American civil war, Sherman, who was himself a racist, realised pragmatically that nothing would detach the population of the south from its attachment to the slave-owning economic model, and the culture surrounding it, other than its physical destruction.

Today it may seem that there is no physical infrastructure of American racism left to destroy. But it exists. The operational policing rules that see a black face in a white neighbourhood as an excuse to stop and search; the criminalisation of young black men via the justice system. The existence, all across public life, of unacknowledged segregation. And the relentless echo chamber of racist attitudes whose pinnacle is Fox News, but whose depths are the local radio talkshows whose hate speech drifts on to your radio just as soon as you change frequencies at the city limits.

Above all, the institution enabling the recrudescence and violent action of the far right is the Trump presidency itself.