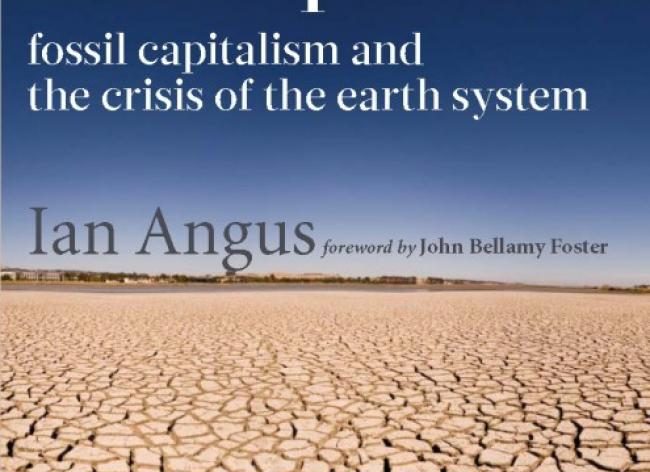 Facing the Anthropocene: Fossil Capitalism and the Crisis of the Earth System

In August 2016, the International Geological Congress voted formally to recognise that the world has entered a new geological era, the Anthropocene. The effect of human activity on the planet has now become as significant as that of the comet that wiped out the dinosaurs and ended the Cretaceous era. In recognising this, it is important not to fall into a view of human effects on the Earth that idealises a separation between human society and a reified ‘Nature’.

Human societies are part of, not separate from, the natural world, and have always affected it in different ways. Some of these, such as the creation of enriched terra praetasoil in the Amazon, have been largely beneficial; others, such as deforestation in Iron Age Britain, less so. Either way, their effects even before industrialisation have often been considerable. The importance of the Anthropocene is thus not that it shows a collective failure to tread sufficiently lightly upon the Earth, but rather that capitalism so extends the effects of human activity on the environment that previous quantitative shifts have become a qualitative change.

Angus shows how capitalism has created the ability to affect the world far more profoundly and far more destructively than any previous human system, and that this destructiveness is an integral, structural aspect. That climate change is capitalism’s fault is not universally acknowledged by environmentalists. Angus provides a useful reminder of the existence of groups like the Breakthrough Institute, who argue that market forces and private-sector dynamism are the answer to, rather than the cause of, the climate crisis.

He also deals concisely and devastatingly with the view that capitalism’s need not just for growth but for ever-increasing growth is just an ‘obsession’ or an ‘addiction.’ The ideology of growth, he explains, is there to justify the need for continued accumulation; it is not the cause of it. It is fair to say, however, that for eco-socialists, the conclusion that capitalism is the problem, and a systemic response the only answer, would be an unsurprising one. The importance of Angus’ argument is that it goes beyond the simple recognition of capitalism’s unique destructiveness to interrogate the precise factors which lie behind the shift into the Anthropocene.

When did the Anthropocene begin?

Just as the idea that we have entered the Anthropocene era has been the subject of much scientific debate, so too has the question of to when we should date the change. It might seem natural to put the beginning of the Anthropocene at around the Industrial Revolution, as the source of anthropogenic climate change, if indeed not earlier. As Jason Moore has argued in his recent Capitalism in the Web of Life, (reviewed on Counterfire here), capitalism’s accumulatory rapacity pre-dates the Industrial Revolution, stretching back to the beginnings of the mode of production between the fourteenth and seventeenth centuries. It is clear, however, that there was a significant increase in the scale of the indicators of the Anthropocene (these go beyond CO2 levels to encompass species and forest loss, acidification, biosphere degradation and so on) from the mid-twentieth century on. This increase is so marked that some of those earth scientists who originally saw this as a second-stage intensification of an earlier shift into the Anthropocene now argue that the Anthropocene should be seen as starting in 1945.

This dating would of course place the beginning of the Anthropocene not just in the middle of the twentieth century but at the end of ‘the most destructive, most murderous, most inhumane conflict in all history’ (p.137). This is not a coincidence. The direct effect of the US victory in the Second World War was create the conditions for the Anthropocene’s qualitative increase in human destructiveness, while making US capitalists the richest the world had ever seen. The conditions for the ‘long boom’, with such appalling consequences for the environment, were:

‘a powerful industrial base in the United States, concentrated in a few hundred giant corporations and dominated by the petroleum/automotive sector; a large and growing military budget; a disciplined and financially secure labor force, purged of militants and militancy; and a seemingly infinite supply of cheap energy’ (p.152).

These were all in place by 1950 as a direct result of the war. One of the contenders for the key geological marker of the beginning of the Anthropocene is the fallout from the nuclear bombs dropped by the US on Hiroshima and Nagasaki in 1945, and the numerous nuclear weapons tests since. The maintenance of US hegemony in the later twentieth and twenty-first centuries has continued to make the situation worse: Angus points out the enormous oil use and carbon footprint of the US military at home and in operations abroad.

That the Anthropocene began in 1945 therefore underlines the historical nature of our impending environmental catastrophe. Rather than explanations which locate the cause of climate change in the increasing numbers of people on the planet or in features of human nature (whether always innate or intensified by capitalism), this dating shows it as a result of specific developments in late capitalism arising out of the Second World War. It also tells us who our enemies are.

It is sometimes argued that it should be possible to get corporate elites to support action on climate change because, after all, they live on the same planet and have to face the same consequences of environmental degradation as the rest of us. It may well be a fact that individual corporate executives don’t want to see their children die in killer heatwaves any more than their cleaners do, but Angus’ systemic analysis shows how the needs of profit will always supersede any such personal recognition of shared interests.

In fact, as we have now seen many times, the truism that the effects of climate change will hit the poor hardest is not only true because the areas in the world which are most vulnerable to changes in climate also tend to be poor. It is also because under pressure, the capitalist system turns to exterminism: ‘the tacit or open acceptance of the necessity for mass exterminations or die-offs … as the price for continued accumulation and the political dominance of a ruling class …’ (p.180)

Angus cites the example of Hurricane Katrina, where survival depended on the financial wherewithal to get out before the storm hit New Orleans, and the more recent but just as ‘savage sorting’ when Hurricane Sandy hit New York in 2012 (p.179). Outside the US, he cites the UK government’s refusal to support a sea-rescue programme for migrants in the Mediterranean, on the grounds that ‘leaving innocent children, women and men to drown’ would make people ‘think twice about making the journey’ (Lady Anelay, speaking in the House of Lords, quoted at p.181). More recently still, the deaths of well over eighty people in the Grenfell Tower fire, happened because it suited governments better to outsource and privatise council housing, fire and building control than to ensure people had housing that wasn’t going to kill them. This has provided yet another demonstration of how the lives of the poor weigh very little when compared with profit.

It is not, Angus concedes, that the technological options for shifting away from fossil fuels do not exist: they do. It would even be theoretically possible for national economies to transform themselves quickly into renewable energy ones. This sort of economic transformation is one which greens are fond of pointing out was achieved by the US on entering the Second World War. The point is, however, that that transformation was for the benefit of capital and in line which what US capitalists had decided was their preferred course of action. Decarbonising the modern economy would have to happen despite capitalist interests, and that clearly will be only over our dead bodies. The conclusion is inescapable; the only way to meet the challenge of the Anthropocene is to overthrow the capitalist system.

Angus sees hopeful signs for the creation of an open, inclusive movement that could do this in the global activist meetings at Copenhagen and Cochabamba. From a UK perspective, I would add the destabilisation of the Tories in the wake of May’s disastrous election result, the widespread anger and resistance coalescing after Grenfell, and the growing understanding that this is a real crisis of the elites.

Angus is absolutely right that any movement needs to involve everyone prepared to fight, and that the worst thing for the left to do would be to stand on the sidelines criticising details of the activists’ politics. It is also necessary to understand that in order to defeat the system, we have to grasp the key link in the chain; the issue around which we can mobilise the maximum numbers of people and hit the government where they are weakest. That issue is not necessarily going to be an environmental one; in fact, experience has shown that climate change issues are comparatively hard to mobilise large numbers around on a national scale. (Local protests, for example against fracking, are often considerable but these are, by definition, local.)

What this means is not that we must despair about our ability to bring down the system, but that environmentalists who recognise that this is the only answer to our environmental problems, have to be part of the wider fight, alongside activists for whom climate change may still be only a distant abstraction. Climate-change campaigners in common cause with anti-austerity, anti-war, anti-Islamophobia and anti-racism protestors can help to build a movement which can have a genuine chance now of achieving real change. Angus’ excellent arguments can help to get us there.