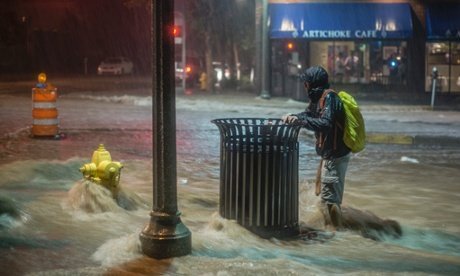 Extreme weather like the drought currently scorching the western US and the devastating floods in Pakistan in 2010 is becoming much more common, according to new scientific research.

The work shows so-called “blocking patterns”, where hot or wet weather remains stuck over a region for weeks causing heatwaves or floods, have more than doubled in summers over the last decade. The new study may also demonstrate a link between the UK’s recent flood-drenched winter and climate change.

Climate scientists in Germany noticed that since 2000 there have been an “exceptional number of summer weather extremes, some causing massive damage to society”. So they examined the huge meanders in the high-level jet stream winds that dominate the weather at mid-latitudes, by analysing 35 years of wind data amassed from satellites, ships, weather stations and meteorological balloons. They found that blocking patterns, which occur when these meanders slow down, have happened far more frequently.

“Since 2000, we have seen a cluster of these events. When these high-altitude waves become quasi-stationary, then we see more extreme weather at the surface,” said Dr Dim Coumou, at the Potsdam Institute for Climate Impact Research. “It is especially noticeable for heat extremes.” The intense heatwaves in Russia in 2010, which saw 50,000 people die and the wheat harvest hit hard, and in western Europe in 2003, which saw 30,000 deaths, were both the result of blocking patterns. The Intergovernmental Panel on Climate Change concluded in 2011 that extreme weather would become more common as global warming heats the planet, causing both heatwaves and increasingly severe rain storms.