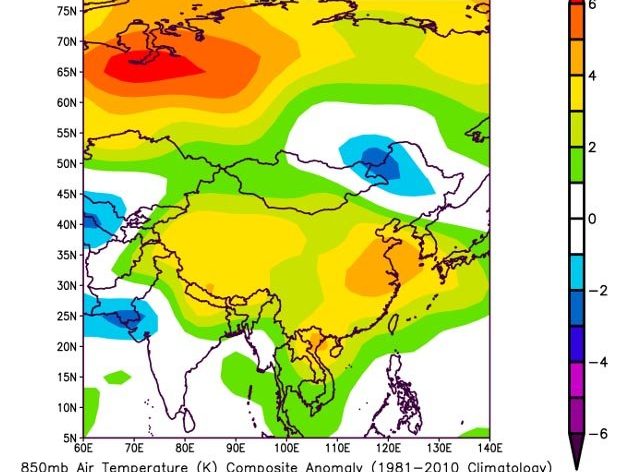 What is most likely the most intense heat wave ever observed in Southeast Asia has been ongoing for the past several weeks. All-time national heat records have been observed in Cambodia, Laos, and (almost) in Thailand, Malaysia, Singapore, and Vietnam. Meanwhile extreme heat has resulted in all-time record high temperatures in the Maldives, India, China, and portions of Africa as well. Here are the details.

We all assumed that the strong El Nino this year would result in drought and high temperatures in Southeast Asia. It seems that although El Nino didn’t work out so well for California (precipitation–wise) the expected impact of the system over performed in Southeast Asia where all-time heat records have been broken and a withering drought is in progress. Maximiliano Herrera, the foremost climatologist investigating world temperature records, has provided the following statistics. These figures are confirmed by the respective meteorological agencies that maintain their countries climate data.

National all-time record high of 42.6°C (108.7°F) set at Preah Vihea on April 15th. This surpassed the record set just two days previously at Bantey Ampil (42.2°C/108.0°F on April 13th). Prior to this year, the maximum measured temperature in Cambodia was 41.4°C (106.5°F) at Stoeng Treng in 1960. The capital city of Phnom Penh also measured its highest temperature on record with a 41.0°C (105.8°F) reading and about half a dozen other cities and towns saw temperatures peak above the previous national record of 1960!

Near national record achieved at Sukhothai on April 12th with a 44.3°C (111.7°F) reading just shy of the record 44.5°C (112.1°F) observed at Uttaradit on April 27, 1960. In addition to Sukhothai at least 50 Thai towns and cities broke or tied their all-time record maximum temperatures (including the normally temperate island resort of Ko Samui with a 38.0°C/100.4°F reading). The minimum of 31.4°C (88.5°F) at Sakhon Nakon on April 15th was likely the warmest low ever measured in the country outside of the Bangkok metropolitan area.

Unfortunately, recent weather data from Myanmar has been sketchy at best, although at least one city, Dawei, has broken its all-time heat record with a 39.0°C (102.2°F) reading. There have been several 46.0°C (114.8°F) reports but it is not known at this time if these were the actual daily maximums. The all-time heat record for Myanmar is 47.2°C (117.0°F) at Myinmu on May 14, 2010 (the beginning of one of Asia’s greatest heat waves).

The real story for Vietnam has been the historic drought (said to be the worst in 100 years) that has impacted the fertile Mekong Delta region (and also the rest of mainland Southeast Asia). So far the warmest temperature measured in the country has been 41.8°C (107.2°F) at Tuong Duong on April 15th. The same site holds Vietnam’s all-time heat record of 42.7°C (108.9°F) set on May 12, 1966.

A Drought Risk Index map of the Mekong River Basin. The areas in red are those that have been most impacted by the El Nino-driven drought that is occurring now in the region. Map produced by FutureWater (a research and consultancy firm specializing in drought issues).

All in all, the on-going heat wave is easily the most intense such to affect Thailand, Laos, and Cambodia since at least 1960 and probably even more so.

Although the heat wave in Southeast Asia deserves the closest attention, all-time national heat records have also been set for the Maldives Islands, India, China and in Africa. China’s southernmost province of Hainan (Island) saw several sites breaking all-time heat records with the warmest being Danxian with a 40.5°C (104.9°F) reading on April 16th. In India the city of Kozhikode (Calicut), located on the usually temperate coastline of Kerala State (southeastern India) saw its temperature peak at a record 39.1°C (102.4°F) smashing its previous record high of 37.2°C (99.0°F). Astonishingly, this former record has been broken 35 times so far this year and counting! The POR at Kozhikode goes back to the 1870s. Temperatures in the normally hotter locations in India have reached as high as 46.0°C (114.8°F) so far (at Sundargarh and Bankura on April 16th).

Walvis Bay, Namibia on the usually chilly shores of the South Atlantic Ocean in southern Africa, saw a record high of 42.8°C (109.0°F) at its airport location on April 15th. The normal daytime high in April here is 19.1°C (66.4°F). Photo by Mark van Aard.

The heat waves are still in progress and more records over at least the next month are likely.

KUDOS: To Maximiliano Herrera for the above information. For a more comprehensive look at all the temperature records broken so far this year see his web site here.