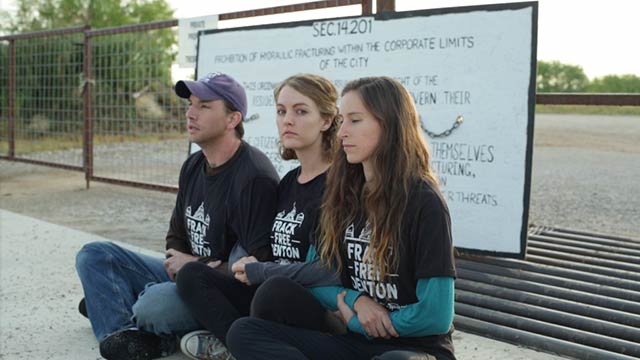 For years, environmental philosophy professor Adam Briggle has opened his ethics classes at the University of North Texas in Denton with writings on nonviolent civil disobedience, usually Henry David Thoreau’s classic essay “Resistance to Civil Government.” But Briggle has never before engaged in such an action himself – until now.

On June 1, Briggle, who is president of the Denton Drilling Awareness Group (DAG), one of the driving forces behind a citizen-led initiative that banned hydraulic fracturing (fracking) in Denton city limits in 2014, delayed scheduled fracking operations at a Vantage Energy gas well site on the edge of the city’s west side by blocking the entrance to the site Monday morning for about an hour.

Denton police arrested Briggle, alongside DAG vice president Tara Linn Hunter and resident Niki Chochrek, after they refused to move from the entrance of the Colorado-based oil and gas company Vantage Energy site, issuing criminal trespass citations to all three. The group sat down in front of a blown-up, wooden display of Denton’s ordinance prohibiting fracking in city limits, which the police had to use bolt cutters to dismantle in order to open the gate of the entryway. Later that day, they were released from Denton City Jail on “personal recognizance” as upstanding citizens.

Whether Briggle’s act fits into the traditional definition of civil disobedience – which usually entails conscientiously breaking a law one views as unjust in order to change it – presents a sort of synchronous, philosophical conundrum for the philosophy professor, because he’s actually just trying to uphold Denton’s democratically approved ordinance prohibiting fracking.

“Maybe it’s not even civil disobedience,” Briggle told Truthout before his arrest. “But I also realize though, that it’s something that has to be taken very seriously … Something has to rise to a certain level to warrant an act of defiance, and I feel like there’s a lot of ingredients that go into that, but one of them is: Have you exhausted all other pathways by which to change things and accomplish justice?”

“In a naked display of corruption, the industry bought a new law.”

The Texas legislature’s early May passage of House Bill 40 (HB 40), a law rendering Denton’s fracking ban unenforceable and limiting cities’ ability to regulate the oil and gas industry across the state, rises to just such a level, leaving activists like Briggle with no other recourse but to use direct action tactics. The bill was written directly in response to Denton’s citizen initiative banning fracking.

On Tuesday, June 2, three more Dentonites, Rodney Love, Jonathon Vann and Elida Tamez, were arrested in front of the entrance gates to the Vantage Energy well site for criminal trespass. They were likewise released on personal recognizance.