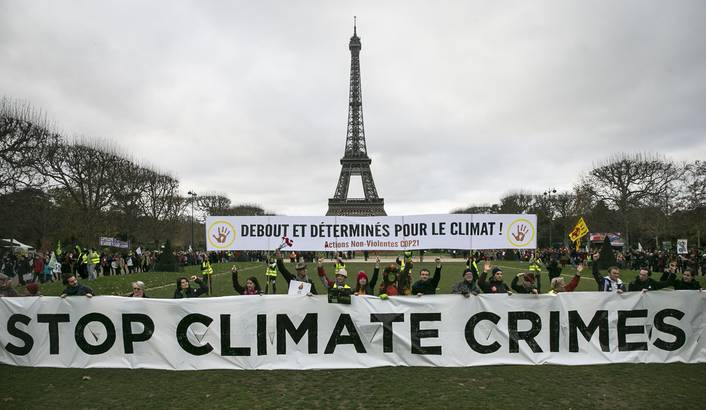 The enemy is not the climate; it’s capitalism

In a new article in the New Republic, 350.org founder Bill McKibben, probably the world’s most influential climate activist, argues that World War III has begun and that the enemy is climate change.

He goes on to say that we are losing the war, that we should learn from the experience of World War II, that by retooling industry as we did then we can win the war. In making this case, he is largely adopting the position that has been promoted since 2014 by The Climate Mobilization (TCM). A few days after McKibben’s article appeared, TCM’s co-founder Ezra Silk published an extensive “Victory Plan”, which outlines the steps needed to “restore a safe and stable climate”, “reverse ecological overshoot”, and “halt the 6th mass extinction”.

Before going on to say what I think is wrong with McKibben’s and TCM’s position, I want to make it clear that there is much that is certainly right about it. Above all, they recognize the seriousness of the crisis, the fact that many people who are aware of climate change under-estimate the seriousness, and the need for drastic action to solve the crisis.

The problem is that what they are arguing for is not nearly drastic enough. This is because their “war” is against nature, and as such it ultimately relies on technological fixes, rather than challenges to the political and economic system. McKibben rests much of his case on the well-known work of Stanford University engineer Mark Z. Jacobson and his colleagues, who have argued that renewable technologies could replace those based on fossil fuels in the United States within decades. While Jacobson has his critics, his work is undeniably important. What his work shows — and he himself agrees — is that the main obstacles to solving the crisis are not technological but rather political and economic. The question is who controls the technology.

If this is so, then we must look for the enemy elsewhere. In what must be the best-known of all books written on the climate crisis and its causes, This Changes Everything: Capitalism vs. the Climate, author Naomi Klein spells it out pretty clearly. The enemy (of the climate and hence of us) is capitalism. Although Klein does not go into much detail about what she actually means by “capitalism”, a number of ecosocialist writers have filled this gap. For an excellent overview, suitable for those who know little about the science of climate change and/or little about capitalism, see David Klein and Stephanie McMillan’s  Capitalism and Climate Change: the Science and Politics of Global Warming. A common theme in this work and others, especially Richard Smith’s Green Capitalism: the God that Failed and Daniel Tanuro’s Green Capitalism: Why It Can’t Work, is that capitalism, by its very nature, is completely incompatible with a just and sustainable future. If capitalism has a “solution” for the climate crisis, one can only imagine a dystopian world where elites survive in isolated islands of livability, protected from the masses of climate refugees on the outside.

McKibben and TCM look to the mobilization that took place in the US during World War II as a model for how the US should now respond to climate change. Much as the US declared war on fascism then, they say it should declare war on climate change today. Silk believes that “America is capable of leading the world in this mobilization”.

As McKibben discusses (though in somewhat different terms), there was a division in the US ruling class in the years before the US entered the war, with some preferring to stay out of the European and East Asian conflicts, and others, including President Roosevelt, eager to be involved. The Japanese attack on Pearl Harbor gave Roosevelt the excuse he needed to pursue war on both fronts. McKibben also discusses the remarkable process by which US industry was retooled to support the war effort. The ultimate result, of course, was the victory of the US and its allies.

But let’s not forget another outcome of the war effort: the ascendancy of the US to its unchallenged position as the dominant power in the world. Far from weakening the reigning political and economic system, Roosevelt strengthened it immeasurably. This was certainly no accident. Another outcome of the war was the greatly increased power of the US military, both within the US and the world.

If it is the political and economic system that is the problem, then we should not be seeking inspiration in a top-down campaign that served to strengthen that system, leaving it in a position to further devastate the environment and giving us the crisis we face today. Nor should we expect the leaders of the movement that is called for now to be wealthy politicians like FDR and his corporate allies. One only has to look at the outcomes of the annual UN Conference of the Parties meetings to see how hopelessly ineffectual the world’s economic and political leaders have been in addressing the climate crisis.

As Naomi Klein and others have shown, the ecological crisis coincides with other forms of oppression that are integral to capitalism, and those that are the most oppressed by this system are also those most likely to suffer the effects of climate change and other forms of environmental degradation. If World War III has already begun, then it is a war being fought mainly by these people, those in the Unist’ot’en camp in British Columbia defending their land against pipelines and natural gas; those in northern Greece struggling to keep gold mines out of their territory; those in Andhra Pradesh, India, battling the companies trying to create coal-fired power plants on their land; those in South Chicago who have fought to keep pet coke storage facilities out of their neighborhood.  It is these people and their allies elsewhere that should inspire us in the “war” that lies ahead, not politicians and “enlightened” capitalists.

History offers us many examples of people rising up against unjust systems — institutionalized racism, patriarchy, colonialism, capitalism itself — sometimes in armed struggle, sometimes non-violently. History also teaches us that change does not necessarily happen in a linear fashion; crises can create the conditions for very rapid change. In other words, there is actually hope for the sort of revolution that is needed, a revolution that at a minimum will result in democratic control of the economy and a massive redistribution of income on a world-wide scale.

Silk is to be commended for his detailed and extremely useful discussion of the steps that would need to be taken under a full-scale climate mobilization. More than perhaps any other document, his Victory Plan shows the extent of what must be done. But Silk does not tell us how all of this could actually be accomplished within the existing political system. This is beyond the scope of his project: “speculation about the limits of ‘political acceptability’ in the neoliberal era should be left to historians, sociologists, and politicians”.

The choice in the end is simple. Can we win this fight