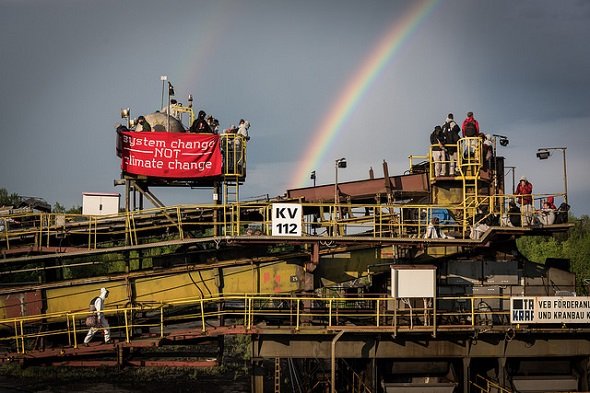 Election of Trump Clarifies the Struggle for Climate Justice

A climate denier elected to the White House presents many questions for the climate movement, write Nicolas Haeringer and Tadzio Müller.

Until Donald Trump’s electoral success, there was at least some reason to believe that the momentum was finally on the side of climate justice. After a cycle of failures and defeats, our mobilizations were finally proving to have an impact – from actions targeting infrastructures to the divestment movement, there were important successes, amplifying what seems to be the irresistible rise of a 100 per cent renewable future.

The climate summit in Paris was not Copenhagen. COP21 enabled the climate movement to enter a new stage with clearer strategic perspectives building stronger alliances among very diverse actors. COP21 (and the momentum it created) has not only changed the political landscape from a movement’s perspective. It has had an impact on the institutional sphere too. As such, this is no guarantee that world leaders will finally opt for bold climate action. But it enables us not only to demand actions but also to hold public actors accountable for decisions they’ve made. It makes our demands stronger: they’re not ‘only’ about climate anymore, but are demands for democracy, and leave us the space to defend the idea of a ‘climate state of necessity’.

Of course, these successes and progresses came with issues, doubts and debates within the movement. But we had this strong feeling that we were beginning to win: after an action this May in the East German lignite region of Lusatia, a thousand people in a circus tent shouted ‘we are unstoppable, another world is possible!’ – and meant it!

It is pretty easy, after Wednesday’s US presidential election result, to give up on hope – and consider Trump’s victory a serious setback. It is only going to be a setback if we let it be so. In that perspective, his victory ironically comes with a clarification, and a major simplification of the climate math. If Trump is to do what he said he was going to do (i.e. drill, drill and drill), it concretely means that the carbon budget for the rest of the world has in fact dropped to zero on election night.

That fact shouldn’t scare us. It is actually a very powerful and simple tool, which shows us what the next steps for the climate movement should be: if the UNFCCC process isn’t going to stop climate chaos, and if the US is being run by a madman – then the movements need to stop it themselves, and those outside of the US have to step up their game to impose fossil-fuel phase-outs everywhere. It also shows us what our solidarity with the communities at the frontline of the fight against climate change and fossil fuel extraction in the US should look like: the best way to build and show that solidarity is by freezing fossil fuel infrastructures everywhere.

To be sure: in a world where someone who claims that climate change is a ‘hoax cooked up by the Chinese’ has just been elected to what is perceived to be the most powerful office on the planet, it is not enough to simply claim that science, truth and reason now dictate how we step up our fight against the fossil fuel industry. After all, Trump’s success rested to a significant extent on the fact that he ignored established ‘truths’, and that his supporters frequently did not care that he was lying, or making utterly absurd statements about building walls and ‘making Mexico pay’ for them.

If Trump’s success is also the success of a ‘post-truth politics’, what does that mean for climate justice politics? It means that we need to leave the intellectually easy certainty of science and of ‘carbon budgets’ behind to a certain extent – science has played a huge role in shaping our movement and our successes, and there is no reason for it to cease. But the laws of physics don’t care about politics, and last night the former proved to be more powerful than the latter. In a trumped-down world, we might respond that the laws of politics don’t care about physics, that ‘truth’ as we traditionally understand it plays less and less of a role.

Trump won because his political discourse resonated with people on an affective level, that is to say: it made them feel understood and it made them feel powerful. Politics in the liberal/leftist tradition too often concerns itself with interests and truths (and then we often wonder why people vote ‘against their interests’, implying, rather arrogantly, that they have been duped by something we like to call a ‘hegemonic ideology’). But in the words of philosopher Baruch Spinoza, since people ‘are led more by passion than by reason, it naturally follows that a multitude will unite and consent to be guided as if by one mind not at reason’s prompting but through some common affect’.

If this is true – and we believe it is, all the more so in an age where neoliberal and centre-left elites have for decades used seemingly inescapable truths (‘There Is No Alternative’) as a battering ram against the historical achievements of working class movements, and where social media are producing multiple-truth-echo-chambers – then climate (justice) politics has to leave the high ground of science.

It has to recreate itself as a politics that makes people feel empowered, that starts not from carbon budgets per se, but from the struggles of those frontline communities most negatively affected, and that, quite simply put, is appealing enough to fight the racist, sexist, nativist juggernaut currently remaking the global North.

In short: we need less COP23, and more Ende Gelände; less potentially doomed fights for carbon taxes in Congress, and more effective, powerful and inclusive struggles like those against the Keystone XL or the Dakota Access pipelines – or rather, we need to embrace them and build them into one movement. Which means more organizing, more peaceful civil disobedience and less time in the political halls of the UN.

Not because the latter are wrong or bad or necessarily ineffective (though unfortunately they often are) – but because in a world where Trump is president of the US, if climate politics remain tied to reason and truth, and to global elite jamborees, it will necessarily fail.

Only a climate justice politics that exceeds the affective attractiveness of the jargon of the other side can win the fights we need to win. This is what many groups are already doing – those who are on the frontline.

Nicolas Haeringer is a campaigner with 350.org France and Tadzio Müller is with the Rosa Luxemburg Foundation.