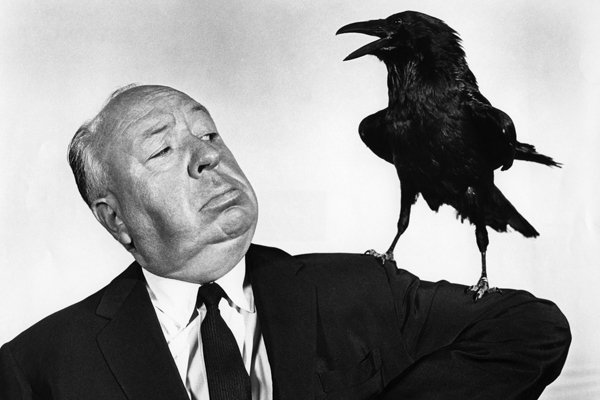 In 1942 Alfred Hitchcock recruited the author of Our Town, Thornton Wilder, to write the screenplay for Shadow of a Doubt, an innocence-versus-evil thriller set in an ‘idyllic American town’. After considering various candidates, Hitchcock and Wilder selected Santa Rosa, a picturesque agricultural community of 13,000 people, 55 miles north of San Francisco in Sonoma County. The following year, Santa Rosa was introduced to millions of filmgoers in a series of establishing shots that began with aerial views of its pretty countryside and ‘all-American’ downtown. Wartime restrictions had precluded set-building and the exterior locations were all real, but it was difficult to believe that sunny Santa Rosa hadn’t been confected by Norman Rockwell on a Hollywood back lot.

Seventy-five years later, we contemplate another aerial view, this time of Santa Rosa’s Coffey Park neighbourhood. The scene, a thousand homes incinerated to their foundations, resembles the apocalypse Kim Jong-un keeps promising to bring to America. Especially shocking to Californians, these were not homes in the combustible foothills or mountains where fire danger traditionally lurks, but on the plain, next to a freeway, schools, fast-food outlets – the kind of landscape where most of us live. Altogether, in one terrible night, Santa Rosa (population 165,000) lost more than 2800 homes and businesses to what is officially known as the Tubbs Fire. But it’s premature to cite losses or add up body counts since, as I write, twenty fires still writhe across the Wine Country, and an army of exhausted firefighters fearfully awaits the return of the Diablo winds.

Although the explosive development of this firestorm complex caught county and municipal officials off guard, fire alarms had been going off for months. Two years ago, at the height of California’s worst drought in five hundred years, the Valley Fire, ignited by faulty wiring in a hot tub, burned 76,000 acres and destroyed 1350 homes in Lake, northern Sonoma, and Napa counties. Last winter’s record precipitation, meanwhile, did not so much bust the drought as prepare its second and more dangerous reincarnation. The spring’s unforgettable profusion of wildflowers and verdant grasses was punctually followed by a scorching summer that culminated in September with pavement-melting temperatures of 41ºC in San Francisco and 43ºC on the coast at Santa Cruz. Luxuriant green vegetation quickly turned into parched brown fire-starter.

The final ingredient in this ‘perfect fire’ scenario – as in past fire catastrophes in Northern California – was the arrival of the hot, dry offshore winds, with gusts between 50 and 70 mph, that scourge the California coast every year in the weeks before Halloween, sometimes continuing into December. The Diablos are the Bay Area’s upscale version of Southern California’s autumn mini-hurricanes, the Santa Anas. In October 1991, they turned a small grass fire near the Caldecott Tunnel in the Oakland Hills into an inferno that killed 25 people and destroyed almost 4000 homes and apartments.

In a post-mortem on the Tunnel Fire, the historian Stephen Pyne, whose case studies are required reading in every fire science curriculum, emphasised that the Oakland Fire Department was not only poorly trained but also epistemologically unequipped to deal with wind-driven fires at the urban-wildland interface:

It did not appreciate how a city, full of internal firewalls, might be breached from the perimeter and find itself assaulted not from the streets but from the air … There was no single flaming perimeter or high-rise to focus the action, only hundreds of individual fires – the firefight as melee.

The current fires also disseminate as a wind-driven hail of burning debris. It remains to be seen whether Santa Rosa’s fire services had tried to apply any of the lessons of 1991.

Californians are notoriously solipsistic about their disasters and tend to save their sympathy for themselves. Yet even here we are so narrowly focused that the worst fire disaster since San Francisco in 1906 has probably generated fewer bytes than serial celebrity molester Harvey Weinstein. And who in the media has connected the dots between the burning wineries, the evacuation of Montana and the fires in Greenland?

Like California, which has an estimated 100 million dead trees, the forests of the Northern Rockies have been massacred by those unstoppable harbingers of global warming, pine beetles. White pines, the cornerstone of the greater Yellowstone ecosystem, have been the hardest hit by the drought-induced infestation, which now affects perhaps 95 per cent of the iconic trees. With two-thirds of Montana experiencing the most extreme drought in a century of record-keeping, fire was the inevitable outcome. The authorities searched for the usual suspects (arsonists, idiot campers, terrorists and so on) to blame for the resulting 1.2 million acres of charcoal, but abundant dry lightning would have sufficed. The firestorms started in July (with parallel outbreaks in Washington, British Columbia and Alberta), led to mass evacuations, and their smouldering remnants still pose a threat.

A satellite first detected the blaze in Greenland at the end of July in reindeer-grazed tundra 90 miles north-east of the town of Sisimiut, not far from the Arctic Circle. The largest fire ever recorded on the great ice island, it was smaller than most of the 6400 wildfires that California experienced this year between New Year’s and Labor Day. Yet for science it will be more memorable. As the far north warms and permafrost begins to melt, peat is exposed and becomes combustible. Peat fires can be almost inextinguishable; in remote polar regions, they could potentially burn for years. (Los Angeles spent two years futilely fighting an underground peat fire in the La Cienega – Spanish for ‘bog’ – area in the late 1920s.) Along with the release of methane from thawing tundra and continental shelves, the carbon dioxide emitted by a burning Arctic is the wild card of global warming.

The big picture, then, is the violent reorganisation of regional fire regimes across North America, and as pyrogeography changes, biogeography soon follows. Some forests and ‘sky island’ ecosystems will face extinction; most will see dramatic shifts in species composition. Changing land cover, together with shorter rainy seasons, will destabilise the snowpack-based water-storage systems that irrigate the West. The Pacific Northwest, according to most researchers, will become even wetter, yet drought years will be more extreme, making great fires more common. In California, on the other hand, a drier, hotter climate will be punctuated by extreme rainfall events, reproducing the drought-fuel accumulation-firestorm cycle that we have seen over the last year. In the desert Southwest, studies point to the weakening of the North American monsoon that slakes Arizona’s thirst in late summer; as Phoenix becomes more like Death Valley, condo sales soar in San Diego.

Jerry Brown’s California enters this new age with a halo over its head. We ‘get’ climate change and thumb our noses at the mad denialist in the White House. Our governor advocates the Paris standards with rare passion and sends our anti-carbon missionaries to the far corners of the earth. We await impatiently that great day when the entire Mojave Desert will be covered with Chinese-made solar panels, and silent Teslas rule the freeways. And we continue to send urban sprawl into our fire-dependent ecosystems with the expectation that firefighters will risk their lives to defend each new McMansion, and an insurance system that spreads costs across all homeowners will promptly replace whatever is lost.

This is the deadly conceit behind mainstream environmental politics in California: you say fire, I say climate change, and we both ignore the financial and real-estate juggernaut that drives the suburbanisation of our increasingly inflammable wildlands. Land use patterns in California have long been insane but, with negligible opposition, they reproduce themselves like a flesh-eating virus. After the Tunnel Fire in Oakland and the 2003 and 2007 firestorms in San Diego County, paradise was quickly restored; in fact, the replacement homes were larger and grander than the originals. The East Bay implemented some sensible reforms but in rural San Diego County, the Republican majority voted down a modest tax increase to hire more firefighters. The learning curve has a negative slope.

I’ve found that the easiest way to explain California fire politics to students or visitors from the other blue coast is to take them to see the small community of Carveacre in the rugged mountains east of San Diego. After less than a mile, a narrow paved road splays into rutted dirt tracks leading to thirty or forty impressive homes. The attractions are obvious: families with broods can afford large homes as well as dirt bikes, horses, dogs, and the occasional emu or llama. At night, stars twinkle that haven’t been visible in San Diego, 35 miles away, for almost a century. The vistas are magnificent and the mild winters usually mantle the mountain chaparral with a magical coating of light snow.

But Carveacre on a hot, high fire-danger day scares the shit out of me. A mountainside cul-de-sac at the end of a one-lane road with scattered houses surrounded by ripe-to-burn vegetation – the ‘fuel load’ of chaparral in California is calculated in equivalent barrels of crude oil – the place confounds human intelligence. It’s a rustic version of death row. Much as I would like for once to be a bearer of good news rather than an elderly prophet of doom, Carveacre demonstrates the hopelessness of rational planning in a society based on real-estate capitalism. Unnecessarily, our children, and theirs, will continue to face the flames.

This essay originally appeared in the London Review of Books.