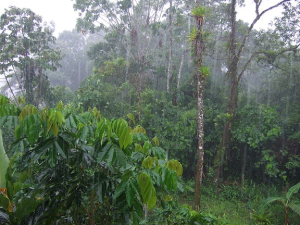 Quito, Ecuador – The Ecuadorian government has announced imminent plans to sign contracts for two controversial Amazonian oil blocks which are facing adamant opposition from local indigenous people residing within the roughly half-a-million acre concessions and beyond. The blocks, known as 79 and 83, overlap with the territory of the Sápara indigenous people, a small threatened group of only 300 which has official recognition by UNESCO as an “Intangible Cultural Heritage of Humanity.”

The two problematic blocks border Yasuní National Park and a government protected area for the nomadic Tagaeri and Taromenane indigenous groups living in voluntary isolation, exacerbating their vulnerability as oil drilling and infrastructure expands north, east, south, and west of them. The blocks also overlap a portion of territory of the Kichwa of Sarayaku, and are upstream from millions of acres indigenous territory. The blocks are in the center of Ecuador’s pristine, roadless southeastern Amazon, where indigenous groups have successfully kept oil companies out of their territories for over two decades.

“Blocks 79 and 83 of Sápara territory affect our communities, who have inhabited these lands for centuries. Now the government wants to cheat and exterminate the Sápara,” said Gloria Ushigua, President of the Sápara Women’s Association.

The Ecuadorian government claims to have consulted the Sápara in accordance with Article 57 of the constitution, which requires Free, Prior, and Informed Consultation (FPIC). However, instead of obtaining consent of the communities, as both Ecuador’s constitution and international law require, the government waged a relentless campaign to divide the Sápara. Despite the government’s false claims of community approval and attempts to create its own Sápara federation, the only legitimate federation of the Sápara does not recognize any agreement for access to Sápara territory.

“The government has not conducted free, prior, and informed consultation as the Constitution requires,” said Manari Ushigua, president of the Sápara Federation. “We reject and do not recognize what the government is doing. We do not accept oil extraction on our lands. We have the right to decide our own future and survival, and are carrying out projects that protect our territory and protect our planet from the impacts of climate change.”

The signing comes after the government’s 11th Round oil tender, which originally sought bids for twenty-one blocks. It was whittled down to thirteen after some of the most controversial were removed due to steadfast resistance. After protests dogged the shopping of the round in Quito, Houston, Paris, and Canada, it was deemed a failure after receiving only three bids. Ecuador’s southern Ecuadorian Amazon has a long history of indigenous resistance, project failures, and companies that have abandoned drilling plans. A laundry list of companies, including ARCO, Burlington Resources, ConocoPhilips, and CGC all had projects paralyzed, were forced to declare force majeure, and ultimately withdrew from the country due to community opposition.

Amazonian communities are well aware of the devastating social and environmental impacts of oil extraction. Their indigenous neighbors to the north bore the brunt of Chevron’s drill and dump tactics for three decades in what is considered one of the worst oil-related disasters on the planet, and are still waiting for justice. Despite winning a $10 billion judgment against the company, the communities have yet to get the clean up, health care, and clean water they so desperately need and deserve. Chevron’s failure to abide by the judgement has forced communities to seek company assets around the world, underscoring the lack of accountability in Ecuador’s oil patch, and influencing communities’ perspective on new oil projects.

The Ecuadorian government has found itself in front of international arbitration panels over blocks promised to companies that could not get off the ground due to local resistance. The Kichwa of Sarayaku won a landmark judgment against the Ecuadorian government at the Inter-American Court of Human Rights (IACHR) when the government forcibly facilitated the entry of an oil company into their territory.

Earlier this week Sarayaku released a statement opposing the government’s attempts to once again violate their rights: “We condemn and reject the government’s attempts to divide the communities in the proposed oil blocks, which cause conflict between indigenous peoples and is in violation of the judgment it lost. Oil exploitation in our territory would destroy our way of life and the living forest, the harmony between plants, animals, our people, and our ancestors’ spirits.”

Ecuador has announced planned changes to its contract structure in anticipation of a new Amazon oil tender later this year. However, while changing the oil contracts to make them more industry-friendly may attract more interest, indigenous opposition continues to be a major factor as to why Ecuador’s southern Amazon crude has remained underground.

Meanwhile, Ecuador’s economy is in a free fall, predicting little growth, major spending cuts, and layoffs as its discounted Napo and Oriente crude hover just above $20 a barrel. Oil-backed loan payments to China are a major driver in the government’s plans to open up more of its Amazon over the next five years. China is Ecuador’s largest creditor, providing nearly $25 billion in financing over the last 8 years for infrastructure and mega-projects, with many Chinese firms receiving the contracts.

“These blocks are high risk, little reward. Companies and investors need to know they are buying a problem,” said Kevin Koenig, Ecuador Program Director for Amazon Watch. “At a time when the world needs to begin keeping oil in the ground and protecting critical rainforest ecosystems above ground, Ecuador seems intent on putting its indigenous peoples, rainforest, and the climate at risk.”