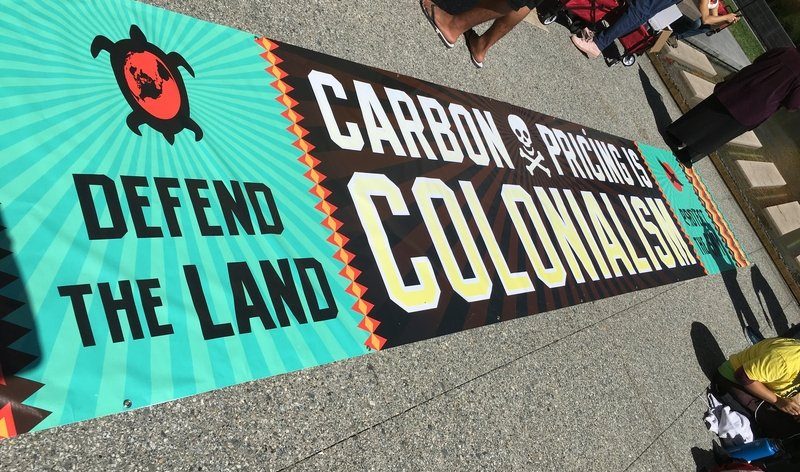 Ecosocialism’s Greatest Challenge: The Color-Line and the Twenty-First Century Ecoleft

Shortly before protesters gathered around the world on the eve of the Global Climate Action Summit, an ecosocialist friend commented on the pointlessness of engaging in more “feel good” marches. Something struck me as horribly wrong about this casual dismissal of mass actions in which we take to the streets to bear witness to the mounting opposition to global ecocide.

As an active participant in San Francisco Bay Area climate actions over the past five years, I can’t think of a single march or rally deserving of the trivializing “feel good” label. None has been a platform for Al Gore or Michael Bloomberg or Jerry Brown or Michael Shellenberger to peddle market solutions to climate change, fantasies of capitalism without fossil fuels, nuclear power, or geo-engineering.

Marches and rallies are important to the Left not only for their potential to topple governments, but also because the process of organizing street actions builds organizational capacity, strengthens ties among activists working on different fronts, creates opportunities to engage with the larger community, and sparks intense political struggle without which our movement will remain caged on the pages of theoretical journals. If building a more powerful movement also feels good, then we ought to feel good more often.

The Solidarity to Solutions Week of Actions that took place in San Francisco this past week exemplified these gains for the climate movement. They were not “feel good” exercises. In fact, they highlighted the growing strength of a militant anti-capitalist climate movement with significant leadership by and participation of people of color, women, and indigenous activists greatly underrepresented in the self-identified ecosocialist Left.

Ecosocialists have much to learn from this movement that we do not lead, but that articulates a critique of green capitalism, the commodification of nature, and imperialist domination of the Global South that is deeply compelling and akin to our own.

Over recent months, the Climate Justice Alliance, Grassroots Global Justice Alliance, Indigenous Environmental Network and Right to the City joined forces in the It Takes Roots Alliance to build a week of actions in San Francisco as counterpoint to the Global Climate Action Summit where “market-based schemes will be promoted as the only response to climate change.”

The week kicked off with a 30,000-person march in conjunction with the People’s Climate Movement. The march ended without the usual rally orations, but instead featured painting of the world’s largest street mural and a vibrant street fair where groups actively fighting climate change in the Bay Area had an opportunity to engage one-on-one with participants.

The week continued with tours of local sites of environmental struggle, a day-long It Takes Roots member assembly, another day-long summit of workshops open to all, and two major direct actions confronting the invitation-only GCAS from which grassroots and radical activists were excluded.

The larger of the direct actions involved over a thousand demonstrators who linked arms to block entrance to the GCAS on the day Michael Bloomberg was scheduled to speak.

A major theme of this demonstration was “Rise Against Climate Capitalism.”  In the call to disrupt GCAS, Diablo Rising Tide posted, “We’ve known for a long time to not believe the false narrative that green capitalism can take care of us and the planet. The people that got us into the climate crisis are not going to be the ones to get us out of it.”

Challenging Governor Brown’s claim to leadership of the world’s fight against climate change, the call continued “Jerry Brown’s record on offshore drilling, fracking and protecting the water and air of local refinery communities doesn’t match his rhetoric — so we’re skeptical to say the least.”

Coordinated by It Takes Roots, Indigenous Environmental Network, Idle No More SF Bay, the Ruckus Society, Brown’s Last Chance, and Diablo Rising Tide, the blockade of GCAS was at once one of the most diverse and one of the most explicitly anti-capitalist environmental actions ever held in the Bay Area. Led mostly by young people of color, demonstrators held the street for about three hours before marching to a nearby park for a closing gathering around a large circular banner that proclaimed “End Climate Capitalism.”

What does this all mean for the future of ecosocialism?

First, it means we means we who belong to largely white ecosocialist groups have many allies with deep roots in communities of color who share our understanding that capitalism is incompatible with a decent future for life on our planet.

Second, if ecosocialism is to go anywhere. ecosocialists must make common cause with these allies, building relationships through working together, just as they have worked together over recent years to build relationship among themselves. If the members of the more than 200 organizations aligned with It Takes Roots are not going to be part of our ecosocialist revolution, we need to reconsider our vision.

Third, to join in common cause will require respect for the vision and priorities these groups bring forward as we all struggle for the revolutionary change. Ecological Marxists like John Bellamy Foster, Chris Williams, Ian Angus, Andreas Malm, Fred Magdoff, Michael Löwy, Joel Kovel, and Richard Smith have made great contributions to our understanding of capitalism’s threat to life on the planet and socialism’s offer of a hopeful way out, but we will not find the path forward if we are only listening to the voices of white male academic Marxists, even those who have the happy gift of writing in a popular style.

Listening to other voices will sometimes require us to accept leadership from others outside our existing circles. The explicit embrace of socialism should not be a litmus test in determining whom we embrace. Twentieth century socialism led to tragic flaws and perversions that have made many sincere anti-capitalists reluctant to reclaim the word, even when garnished with the “eco” prefix. Any notion that we who currently identify as ecosocialists are the bearers of a complete vision of post-revolutionary society, or a complete strategy to get there, is absurd. Our ecosocialist tendency is still much clearer in its diagnosis of the capitalist fever that grips the planet than it is in its practical grasp of how to build a movement that can replace capitalism. The socialist canon does not answer the perennial question, “What is to be done?” An authentic movement for liberation and survival in our time will involve leadership from Indigenous activists like Kandi Mossett and Tom Goldtooth, guiding insights from African-American thinkers like Keeanga-Yamahhta Taylor, and inspiration from the Rev. Dr. William J. Barber II. We have much to offer in collaboration, not only our connection to a worldwide history of struggle against capitalism and a theory of how it can be overcome but also our curiosity, our determination, and, if we are really hoping to change the world, our humility.

The It Takes Roots alliance has glitches to iron out if it is to be a unifying ideological and practical center. Some Bay Area frontline activists who wanted to be part of the “official” Week of Actions could not figure out how to get on board. Mysteriously, It Takes Roots did not welcome efforts by grassroots activists who have been holding off siting of a coal terminal in frontline West Oakland for three-and-a-half years. No Coal in Oakland offered to organize an ecotour and demonstration on the Bay Bridge pedestrian walkway on the day set aside for ecotours. Sunflower Alliance, a local group that led efforts to deny tar sands oil a path to market by imposing caps on local emissions from Northern California refineries, also found itself sidelined. The emphasis on Indigenous leadership, including prayer, reportedly left some Christian pastors wondering where they fit in. Although It Take Roots is sharply critical of capitalism, it has, as yet, few roots in Labor.

Despite these concerns, it would be a tragic mistake for activists who are not well-connected to It Takes Roots to assume ill will. Staging the Week of Actions was an enormous undertaking that, as anyone who has organized a big coalition event knows, required much internal struggle that detracted from the group’s ability to sort out some of its relations with those outside its ranks.

After No Coal in Oakland’s ecotour proposal got no response, No Coal in Oakland activists, a number of whom identify as ecosocialists, found other ways to participate successfully in Sol2Sol week. On the first day of Jerry Brown’s summit, NCIO staged a spirited picket line outside a nearby responsible investment conference to call out the bank seeking to finance the West Oakland coal terminal. Diablo Rising Tide, one of the organizations spearheading direct actions during Sol2Sol week, cosponsored the action along with Sunflower Alliance, and East Bay Democratic Socialists of America. A No Coal in Oakland affinity group also participated in the GCAS blockade. Relationships are built this way, by joining forces.

To be sure, bridging the gap between the currently small ranks of self-described ecosocialists—some 40 or so of whom marched in the DSA-sponsored ecosocialist contingent on September 8 in San Francisco–and the “movement of movements” prefigured by It Takes Roots is going to require ecosocialists to look outside our silo. Only by dedication to that task will we succeed in addressing the twenty-first century problem of the ecoleft’s own color-line.

Ted Franklin is a co-coordinator of No Coal in Oakland and a member of System Change Not Climate Change and the Democratic Socialists of America Ecosocialist Working Group.