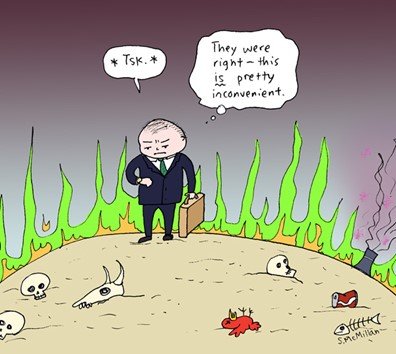 Ecosocialism and the Climate Crisis

Humanity’s failure to slow the rate of global heating can be measured by a single number: the number of parts per million (ppm) of carbon dioxide in Earth’s atmosphere. A decade ago this number was 392.  As of February 2021, Mauna Loa Observatory measured CO2 concentration  to be 416.75 ppm, a rise of 2.31 ppm since February of the preceding year, despite decreased economic activity from the Corona Virus pandemic.

Earth’s atmosphere is on the verge of CO2 concentrations not encountered since 15 million years ago, about the time our ancestors diverged from orangutans and became recognizably hominoid. Other greenhouse gases, methane, nitrous oxide, sulfur hexafluoride, are also at peak concentrations.

The threat to life on this planet posed by unchecked emissions can hardly be overstated.  A 2019 United Nations study recognized global warming is a major driver of wildlife decline, and a paper published in Nature the same year warned that up to a million species of plants and animals are on the verge of extinction, and it’s already happening. According to the 2020 WWF Living Planet report, the average population size of vertebrates declined by 68% just in the past five decades.  In short, Earth is in the midst of its sixth mass extinction (the previous mass extinction, 65 million years ago, ended the dinosaurs).

Humanity is particularly at risk.  A 2020 study, published in the Proceedings of the National Academy of Sciences, predicts that for every additional 1̊C rise beyond the 2019 global average, a billion people will be forced to abandon their locations or endure insufferable heat. The paper warns that in a worst-case scenario of accelerating emissions, areas home to a third of the world’s population will experience the same temperatures as the hottest parts of the Sahara within 50 years.
A paper authored by 17 prominent scientists in  Frontiers in Conservation Science was even more direct.  The authors wrote, “The scale of the threats to the biosphere and all its lifeforms – including humanity – is in fact so great that it is difficult to grasp for even well-informed experts.”  Referencing more than 150 scientific studies and enumerating threats to the biosphere, they described what is required to meet the crisis, writing,

“The gravity of the situation requires fundamental changes to global capitalism, education, and equality, which include inter alia the abolition of perpetual economic growth, properly pricing externalities, a rapid exit from fossil-fuel use, strict regulation of markets and property acquisition, reigning in corporate lobbying, and the empowerment of women.”

The flood of warnings from the world’s scientists has not been ignored.  The global environmental movement has grown by leaps and bounds, propelling some of its spokespersons, including Greta Thunberg, Naomi Klein, Al Gore, and Bill McKibben, to international prominence.  But even with increasing adoption of solar panels, blocking of pipelines, lobbying for stricter regulations, and significant gains in public support, the number that really matters, the number of parts per million of CO2 in the atmosphere, continues to rise year after year.

How can that be?  Why haven’t scientists and environmentalists succeeded in persuading governments to take action to cut emissions on the massive scale necessary to address the crisis?

Does the technology exist to achieve zero emissions?

Much of the research, along with detailed plans, for the world to achieve zero emissions have been pioneered by Mark Jacobson, Director of the Atmosphere/Energy Program at Stanford University.  Together with scientific collaborators, Jacobson has developed “roadmaps for 139 Countries and the 50 United States to Transition to 100% Clean, Renewable Wind, Water, and Solar Power for all Purposes by 2050 and 80% by 2030.”  In congressional testimony,  Jacobson explained that “the main barriers to a conversion are neither technical nor economic; rather, they are social and political.”

Land use and deforestation accounts for nearly a quarter of worldwide greenhouse gas emissions, and must be dramatically altered.  But how?  The island nation of Cuba offers a way forward. Agricultural innovations and environmental protections undertaken by Cuba have gained worldwide recognition. The 2006 World Wildlife Fund’s Living Planet Report, which combined the United Nations Human Development Index and Ecological Footprint, identified Cuba as the only nation in the world living sustainably.  Abandoning monocultural farming and petroleum based fertilizers, and instead employing organic composting, crop interplanting, bio-pesticides, crop rotations, and extensive urban gardening, Cuba’s agricultural methods offer a model to the world for food self-sufficiency and environmental sustainability, albeit a less profitable model for investors than the factory farm.
Humanity has the means to achieve zero emissions rapidly and live sustainably and well through renewable energy, electrified mass transportation, and agroecology.  So why haven’t governments taken serious steps to save humanity and protect the biodiversity of the planet?  Why does it just keep getting worse?

Economists from Milton Friedman to Paul Krugman all agree that capitalism demands perpetual economic growth in order to avoid the economic crises of depressions and recessions.

The very existence of interest rates on capital loans for start-ups and industries seeking to expand forces growth.   In order to repay a loan, the capitalist must produce more value than the exchange value of the loan itself, in terms of commodities and service. The result is growth.  The entire global capitalist system depends on future growth in order to pay off debts, and paying those debts requires ever more production and consumption; thus the entire system must keep growing or it will collapse.

1)  Colonial conquest and imperialism, with the introduction of commodity production to new peoples and territories, in order to gain greater access to markets and cheap labor.

2) Increasing assimilation of public commons into the logic of capitalist profit; for example, commodification of healthcare, education, drinking water, even information such as published research.

This third form of growth is accompanied by increasing resource extraction, trash and toxic waste dumping, deforestation, overfishing, habitat destruction, carbon-intensive advertising, wasteful packaging, built-in obsolescence, and more energy and greenhouse gas emissions to make all these increases possible.  It is this form of capitalist expansion that drives environmental catastrophe most directly.

Examples of item 3 include the exponential growth in plastic production since World War II; the explosive growth in air travel; cell phone proliferation; global energy consumption; growth of weapons industries; and, increasingly, blockchained cryptocurrencies, which require prodigious quantities of energy for computing.
The annual carbon emissions from the electricity required to mine Bitcoin and process its transactions exceed those of the entire country of Argentina.  And that is likely to increase.  According to the New York Times, “the cryptocurrency has become inescapable, with big companies like Tesla and individual investors alike rushing to stock up on the digital token.”

To achieve global sustainability, it would be necessary to shut down not only fossil fuel industries but also the industries that depend on fossil fuels, including automobile, aircraft, airline, shipping, petrochemical, construction, agribusiness, packaging and plastic, disposable products of all sorts, and above all, the war industries.  But doing so would put many millions of workers out of a job and create an unprecedented economic crisis. As Richard Smith summarizes in Green Capitalism: The God that Failed:

“… insatiable growth and consumption is destroying the planet and dooming humanity – but without ceaselessly growing production and insatiably rising consumption, we would be even worse off. Such is the contradictory and suicidal logic of capitalism.”

Even putting aside the ecological destruction of Earth, capitalism is a failed economic system in its own terms, leaving in its wake institutionalized racism and unprecedented extremes of wealth inequality, with billions of people in desperate poverty.

Ecosocialism recognizes ecological principles and sustainability as essential to life. It proposes a socialist steady state economy that does not require growth.   While socialism is capable of economic growth, unlike capitalism, it does not require economic growth in order to avoid economic crises. That critical feature makes sustainability possible within the framework of a socialist economy.

There is no widely accepted blueprint for ecosocialism.  At the very least, it must stand for sustainable production based on human needs rather than profit, and it can offer free health care, free education, free mass transportation, and since most jobs under capitalism are pointless or destructive, a drastically reduced workweek.  Ecosocialism is a social formation to reorganize human cooperation that can only be constructed democratically through a revolutionary process.

But how can an ecosocialist future be achieved?  What steps toward that end can be taken now?

At present the term, Green New Deal (GND), is less a specific set of policies, and more a framework for far reaching coherent environmental policies that would:

1) Nationalize the fossil fuel industry and the industries that depend on fossil fuels in order to phase them out.

A GND of such scope is necessary for survival, but it will push the capitalist system to the limits of what it can accept, and likely beyond.  A detailed program to reach these goals within the framework of capitalism has been laid out by Richard Smith.  Of particular importance are guarantees of high-paying jobs to workers who would otherwise stand to lose their jobs by a phase-out of fossil fuels.

To achieve a GND, electoral politics is clearly necessary, but it is insufficient. Recognizing the necessity for mass mobilization and labor actions, the Democratic Socialists of America, together with labor unions and other environmental organizations, have taken steps to organize and unify the working class in support of a GND.  That requires, in particular, supporting the PRO Act and overturning laws that inhibit workers from joining unions.

A unified working class is capable of organizing and carrying out national and international general strikes as part of a revolutionary struggle to overturn capitalism and take over the means of production. Such actions, with the concomitant level of class unity, will be pivotal in the struggle to dismantle capitalism and put an end to its ongoing destruction of the planet.

Recognition that capitalism is the fundamental driver of the climate crisis is gaining increasing acceptance worldwide. If you agree, then now is the time to join the struggle for a sustainable and just future for our planet

David Klein is a mathematical physicist and professor of mathematics at California State University Northridge, where he is also director of the Climate Science Program. He is a longtime member of System Change not Climate Change and is the author of the ebook, Capitalism and Climate Change: The Science and Politics of Global Warming.