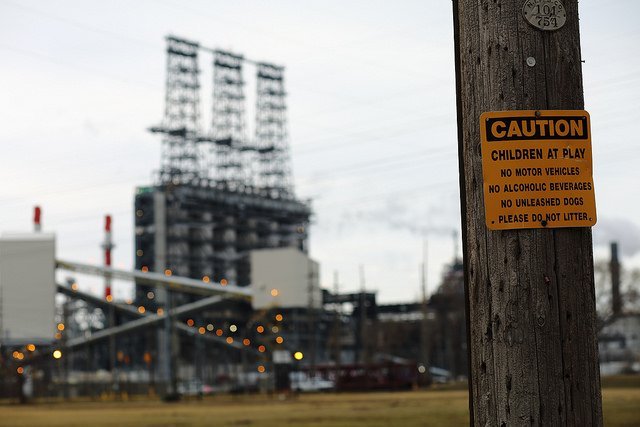 Three months ago, BP’s massive Whiting, Indiana tar sands refinery spilled 1,600 gallons of oil into the largest freshwater system in the world. But that’s nothing compared to what’s coming.

Emergency sirens at BP’s vast Whiting refinery cut the quiet of the night on March 24th. Emergency operators warned concerned callers from nearby East Chicago, Indiana to stay indoors but could not explain the reason behind the commotion. The following day BP officials admitted that the plant had experienced a “disruption in the refining process” that caused 500 gallons of crude oil to leak into Lake Michigan – an estimate the company would later revise to more than 1,600 gallons days later.

Local water officials in Indiana are still awaiting results of BP’s internal investigation, with no release date on the horizon. Meanwhile, the federal Environmental Protection Agency assured the public that their drinking water was safe just one day after BP went public with the spill. By April 4, the agency had declared the company’s cleanup efforts complete.

“Even one gallon from one of these spills can contaminate a lot of water,” said Debra Michaud of Tar Sands Free Midwest. “BP says they contained the spill, but it was so windy and there so many waves, they had to shut down cleanup more than once. They’re hiding the details from us just like they did with the Deepwater Horizon disaster in the Gulf of Mexico. All the major information on the spill has come from BP, not from government agencies. Even the Coast Guard recirculated BP press statements rather than issue their own independent assessments.”

The Great Lakes region where the BP spill occurred is fast becoming an industrial polestar for an explosion of extreme fuel extraction – including both fracked fuel from fields like the Baaken Shale and from tar sands oil being extracted, trucked and piped out of stripped boreal forests in Alberta, Canada. BP’s Whiting plant is an anchor in that vast expansion. The March 2014 spill comes less than a year after BP completed a $3.8 billion upgrade of the Whiting refinery to retool the plant to process tar sands oil – and just three weeks after the company announced plans to double its refining capacity of tar sands at the plant.

Critics like Debra Michaud see BP’s Whiting facility as part of a reckless re-industrialization of a region long plagued by Rust Belt disinvestment and a legacy of sweeping pollution.

“The expanded plant spews out enormous emissions of toxins, including very dangerous chemicals like benzene and hydrogen sulfide,” she said. “Now, they want to more than double the amount of tar sands oil they process, without telling us how they’re going to protect us from the poisonous compounds that lace tar sands oil. That’s a recipe for disaster.”

The March 24 spill occurred in a BP-owned cove on the southern edge of the company’s main water intake facility, which feeds freshwater to the Whiting refinery. The half-mile stretch of sullied shoreline is bookended on the south by the sprawling plant of ArcelorMittal, one of the world’s leading steel and mining companies. Just northwest lies Whihala Beach, a scant two miles from the Illinois border and blocks away from the working class streets of Whiting, Indiana. A new development of tidy homes runs to the northwest, behind the lakeside’s Whiting Park – a popular gathering spot for area surfers, who revere the breaks just offshore.

The cove, part of a larger ecosystem that includes a vital flyway for both migrating birds and those that pull up for a season, is popular with birders looking for overwintering Great Black-backed, Lesser Black-backed, Iceland and Thayer’s gulls from Canada and Alaska. The beach has also become popular lately with ATV-ers, who now have access to the formerly tranquil habitat via a ramp originally used for clean-up equipment that BP left in place after the spill.

Chicago’s skyline dominates the view along the northern lakefront and the vast sprawl of the BP Whiting refinery fills the south and west sight-lines. Eight miles to the northwest and offshore lies Chicago’s 68th street water crib, a linchpin in a massive public water infrastructure that feeds almost a billion gallons of H2O a day to more than 7 million people in the metro area. The Hammond water works intake, which provides drinking water to a vast segment of northwestern Indiana, lies two miles from the “disruption in the refining process.”

In addition to the damage caused by the spill, Whiting facility represents on an ongoing environmental threat. BP is currently shipping tons of polluting petroleum coke – a byproduct of tar sands oil processing – from Whiting to Chicago. Additionally, the Indiana Department of Environmental Management has allowed BP to skirt restrictions on dumping other harmful toxins that include ammonia and suspended solids – industrial sludge rife with heavy metals like lead, nickel and vanadium – into Lake Michigan. A 2007 investigation from the Chicago Tribune found BP has already dumped toxic levels of mercury into the lake.

The Whiting facility and the network of oil transport routes that are springing up around it represent the biggest private sector investment in Indiana history. The residents in the Great Lakes region have found themselves situated squarely at the epicenter of a global oil extraction boom, forced to live with the safety perils that accompany it. These include not just possible spills or accidents at the Whiting plant, but also – if plans are approved – from spills on the lake system itself from tankers and barges that could soon begin plying Great Lakes water routes to refineries like Whiting.

And the vast pipeline system that feeds behemoths like the BP Whiting refinery are in the midst of a massive expansion. Enbridge Inc plans to double capacity on its Alberta Clipper (Line 67) which runs from the the vast tar sands fields near Hardisty, Alberta to an an industrial harbor in Wisconsin on the shores of Lake Superior. The largest freshwater lake by surface area on the planet, Superior is both respected and feared by mariners for its icy waters and ship-killing storm systems.

Oil exploited through the volatile process of hydraulic fracturing will also be pouring onto Wisconsin docks. By 2016, Enbridge is expected to finish expanding its Sandpiper pipeline, originally stretching from North Dakota’s Bakken formation to Minnesota so that it can transport fracked oil onward to Lake Superior. The Sandpiper and Alberta Clipper pipeline expansions dovetail with schemes to allow operators at the Superior port to move extreme oil by ship to Great Lakes destinations that would include BP Whiting.

The Whiting facility and its increased refining capabilities, along with other attractive refinery targets in northern Illinois, makes the prospect of shipping to the northern Indiana/Illinois region by water particularly appealing to industry players, for whom shipping by tanker or barge is a third cheaper than shipping by rail.

Plans proposed by Calumet Specialty Product Partners and dock-operator Elkhorn Industries that would open the port along Lake Superior to crude oil shipments are currently under consideration by Wisconsin’s Department of Natural Resources. Whiting stands as a potential destination point for the crude shipments.

Meanwhile, the Army Corp of Engineers is overseeing an effort to dredge the Indiana Harbor – a stone’s throw from the Whiting tar sands refinery – for the first time in 40 years. The Army Corps cites two reasons for dredging: pollution run-off into Lake Michigan from sediments – and impediments to deep draft commercial navigation created by that sediment. A spill in the harbor, where the dredging project is underway, could severely impact efforts to restore the heavily polluted Grand Calumet river, which feeds into the harbor system.

In fact, the consequences a spill at any location on the waters of the Great Lakes would be dire, jeopardizing the health not only of residents in the Chicago area but of some 40 million people on both sides of the US/Canadian border who rely on the Great Lakes for drinking water. Not by any reasonable standards are government agencies or fuel transporters remotely equipped to contend with the environmental damage that would ensue from potential spills.

“The Great Lakes hold more than 20% of the world’s fresh water and more than 80% of the surface fresh water in the United States,” said Dr. Howard Ehrman, a physician who’s been active in environmental causes in the region for more than 20 years. “This precious resource is already under environmental threat, at the same time that other parts of the country are experiencing devastating, record droughts. Whiting puts a critical, irreplaceable water system in peril. There’s really no way to make the refining process safe, no matter the technology, no matter how correctly you put the pipes together – it’s that dangerous.”

This is the first installment of a two part series from SystemChangeNotClimateChange.org that examines the increasing build-up of fossil fuel infrastructure in the Great Lakes region and its impacts on surrounding communities.

Chris Geovanis is a journalist and activist based in Chicago. She’s written for outlets that range from the Pacifica Radio Network’s nightly newscast, Free Speech Radio News, to TruthOut, CounterPunch and the Occupied Chicago Tribune. Follow her on Twitter via @heavyseas.