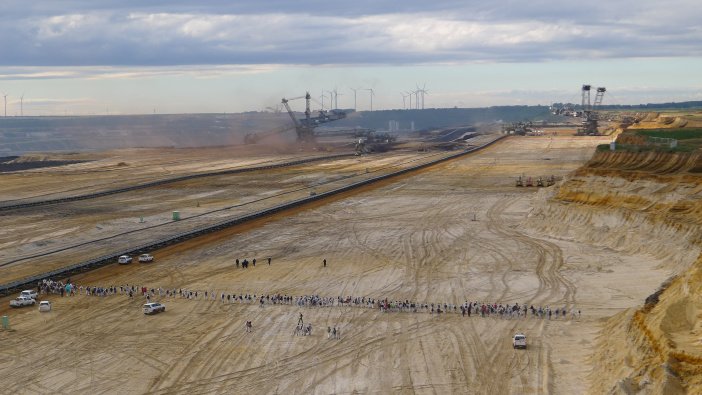 Drawing a line in the sand: The movement victory at Ende Gelände opens up the road of disobedience for Paris

The raucous rattle of a low flying helicopter shakes me awake. It must be the Police.  The sun hasn’t risen yet and the tent’s sides still smell of morning dew. I doubt I was the only one in this field who didn’t sleep deeply last night. Today is the day of action we have been waiting for  Ende Gelände (Here and no Further) – 1500 people have pledged to enter RWE’s Garzweiler open cast coal mine, and block the gargantuan “bagger” excavators with their bodies, thus shutting down Europe’s largest source of CO2 emissions.

This is direct action as it should be. It’s not just a symbolic gesture that tells a story and makes an injustice visible, but an action which targets the very source of the problem and stops it in its tracks. Of course if the day is a success then its stories will work their magic, building confidence in the movements, being told around camp fires and cafés, buzzed through the social media sphere and printed as newspaper headlines.  But the actual stopping of CO2 emissions themselves, the fact that the lignite coal, the dirtiest type of coal in the world, will not be dug out and burnt, is what counts. Ende Gelände is not a media stunt, it’s a collective act of resistance that for once feels proportionate to the scale of the emergency, catastrophic climate change, which is the size of the land, sea and sky combined. If all goes to plan, it will be one of the biggest acts of disobedience for climate justice ever. For many of those just waking up in this lush field,  it will be the first time they have broken the law for their beliefs.  The first time I took direct action was 20 years ago, but the nerves never go away and the butterflies are playing havoc with my intestines.

Thousands have been preparing for this moment over the last week at the Klima Camp. Inspired by UK Climate Camps which were born in the shadow of the Drax coal fired power station in 2006,  this temporary model of an alternative society is set up a few kilometers from the open cast mine in a supportive farmer’s field.  The complex operation is self managed via daily direct democracy meetings where issues such as how not to overburden the field’s WiFi, to organising the emptying of compost toilets are discussed. The organisation is impressive, there are solar panel points to charge up mobile phones, an onsite cinema, an ’emotional first aid’ tent for those going through tough times, rows and rows of identical white workshop tents and an entire circus marquee filled with toys for children.

People from 45 different countries have been running and attending courses and workshops in everything from Transition Theater to Islamic Degrowth Economics,  Urban Food production to the hands on building of a DIY wind turbine that now provides some of the electricity for the camp. What makes protests camps such powerful forms of social change architecture is that unlike a meeting hall, a squatted social center or an NGO’s offices, the borders of the space are porous. Anyone can walk in, there are no closed doors to knock on, or bells to ring, and no intimidating meetings to walk into. This makes it a lot easier for those new to activism to participate.  One of the genius strategies for this particular camp, was the decision to merge the Climate Camp process, a radical activist grass roots anti capitalist movement, with the Degrowth Summer school, a more NGO, academic style talk shop, which nevertheless managed to bring 3000 people to its gathering in Leipzig last year.

As the 40 page thick program of the camp states: “ If we want to put into practice effective and equitable strategies against climate change, we need a fundamental transformation of our economy and of our way of life. (An) “energy transition” that is based only on renewables and efficiency but perpetuates the growth paradigm will not succeed in preventing run-away climate change, won‘t do anything about the many social injustices we face and it won‘t democratize society either. At this joined event we would like to connect debates around climate justice and degrowth and carry them to the place of a key energy struggle.”

In the past there has been a big separation between the NGOs and the grassroots movements acting on climate in Germany (as in many parts of the world).  A lot of work has been done over the last year to bridge this gap for the Ende Gelände action. 350.org, the global climate movement spanning 188 countries,  directly called for participation and brought a number of internationals including from Jordan and Afghanistan. German Friends of the Earth signed a solidarity letter and have been helping organise a legal march for families on the same day as the mine shut down. If we are to build a resilient movement of disobedience for climate justice, these kind of alliances are key,  not so we can create so called “inclusive” and lowest common denominator type actions, but to legitimise creative and radical forms of mass disobedience and build a shared culture of resistance.