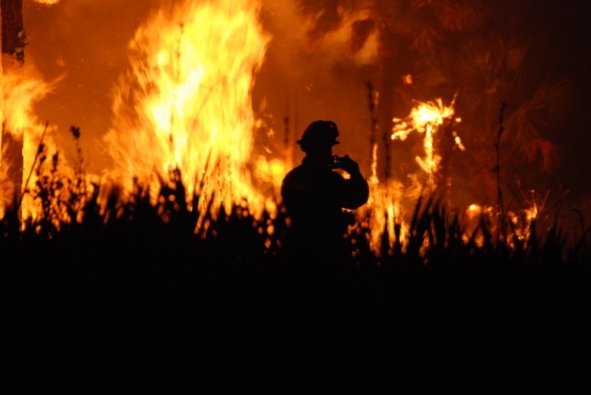 An unusually intense May wildfire roared into Fort McMurray, Alberta, Canada, on Tuesday, forcing the largest wildfire evacuation in province history. The flames rode the back of hot, windy weather that will continue through Wednesday and could pick up again this weekend.

The wildfire is the latest in a lengthening lineage of early wildfires in the northern reaches of the globe that are indicative of a changing climate. As the planet continues to warm, these types of fires will likely only become more common and intense as spring snowpack disappears and temperatures warm.

“This (fire) is consistent with what we expect from human-caused climate change affecting our fire regime,” Mike Flannigan, a wildfire researcher at the University of Alberta, said.

At least one neighborhood of the northern Albertan city of 61,000 has been nearly entirely razed as the blaze ripped through the city from the west on Tuesday. Temperatures soared into the low 90s—up to 40°F (22°C) above normal for this time of year—coupled with high winds helped fan the flames late that afternoon. That sent 80,000 people in the city and surrounding area scrambling north and south through a post-apocalyptic landscape of trees lit up like matchsticks and flashing emergency lights.

People fled the fire using the one road in and out of town even as flames licked the side of the pavement and pea soup-thick smoke turned a daylight drive into one that felt more like dusk.

“You just couldn’t see two feet in front of your truck through all the smoke,” Fort McMurray resident Dan Bickford told the Globe and Mail from an evacuation center in Lac La Biche.