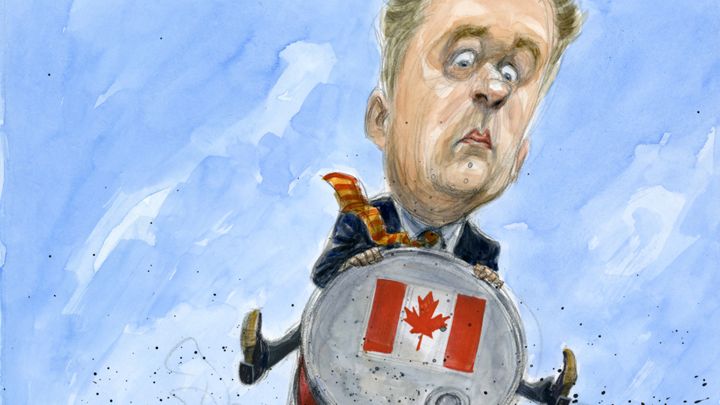 Barack Obama’s *veto of Keystone XL has placed the export pipeline for Canadian tar-sands crude on its deathbed. Earlier in February, the Environmental Protection Agency revealed that Keystone could spur 1.37 billion tons of excess carbon emissions — providing the State Department with all the scientific evidence required to spike the project, permanently. If the news has cheered climate activists across the globe, it also underscored the folly of Canada’s catastrophic quest, in recent years, to transform itself into a dirty-energy “superpower.”

In the minds of many American right-wingers, Canada may be a socialist hell-scape of universal health care and quasi-European welfare policies. But it is also home to 168 billion barrels of proven oil reserves, the third-largest in the world. Since ultraconservative Prime Minister Stephen Harper — famously described by one Canadian columnist as “our version of George W. Bush, minus the warmth and intellect” — took power in 2006, he’s quietly set his country on a course that seems to be straight from the Koch brothers’ road map. Harper, 55, has gutted environmental regulation and fast-tracked colossal projects to bring new oil to market. Under his leadership, Canada has also slashed corporate taxes and is eliminating 30,000 public-sector jobs.

Riding record-high oil prices — $107 a barrel as recently as last June — Harper’s big bet on Canadian crude appeared savvy. The oil boom had driven a seven percent surge in national income, helping Canada ride out the Great Recession with less anguish than most developed nations. And with fossil fuels swelling to nearly 40 percent of net exports, Harper’s Conservative government was on track to deliver a Tea Party twofer in advance of federal elections this fall: a budget surplus and a deep tax cut for the country’s richest earners.

But today, with the price of oil cut in half, the Canadian economy is staggering. Tar-sands producers have clawed back billions in planned investments and begun axing jobs by the thousands. The Canadian dollar, recently at parity with the U.S. dollar, has dipped to about 80 cents. Instead of a federal budget surplus, economists are now projecting a C$2.3 billion deficit. “The drop in oil prices,” said Stephen Poloz, the nation’s central banker, in January, “is unambiguously negative for the Canadian economy.”

If low oil prices hold, the pain will get worse. Most of Canada’s reserves are locked up in tar sands. The industrial operations required to get the oil from the ground to your gas tank are not only filthy and energy-intensive — generating up to double the greenhouse emissions of conventional oil — they also take years of construction to bring online. Because of investment decisions made during the boom years, tar-sands production is projected to expand by seven percent this year, exacerbating the glut. The collapse of crude is threatening to take Harper’s nearly dec-ade-long rule down with it. Canada’s Liberal party, headed by 43-year-old Justin Trudeau (son of legendary Canadian PM Pierre), is running neck and neck in the polls, and bashing Harper where he used to be strongest — his management of the economy. “It’s not fiscally responsible,” said Trudeau in January, “to pin all your hopes on oil prices remaining high, and when they fall, being forced to make it up as they go along.”

As we, in the United States, consider the fate of our own massive oil reserves and confront the specter of yet another Bush presidency, Stephen Harper’s Canada offers a cautionary tale — about the economic and political havoc that can be unleashed when a first-world nation yokes itself to Tea Party economics and to the boom and bust of Big Oil.

Stephen Harper came of age in Alberta, a land of cowboys and oil rigs sometimes referred to as “Texas of the North.” He began his career in the mailroom of Imperial Oil (today an offshoot of Exxon). He rose through Parliament promising a revolution in federal affairs under the battle cry “The West wants in!” Following his election to prime minister in 2006, he wasted little time unveiling his plan to open up his nation’s vast oil reserves. Before an audience of British businessmen in 2006, he spoke of “the emerging energy superpower our government intends to build,” and rhapsodized about the “ocean of oil-soaked sand [that] lies under the muskeg of northern Alberta.” He framed the challenge of bringing that crude to market as though it were a Wonder of the World. “It requires vast amounts of capital . . . and an army of skilled workers,” he said. “It is an enterprise of epic proportions, akin to the building of the pyramids or China’s Great Wall. Only bigger.”

Championing dirty oil meant that Harper had to undermine traditional Canadian values — including environmental stewardship and international collaboration. In 2011, Canada unceremoniously abandoned its climate obligations under the Kyoto Accord, which Harper had once blasted as “a socialist scheme to suck money out of wealth-producing nations.”

Under Harper, investment in the tar sands has surged more than 140 percent to C$59 billion. And the value of Canadian crude exports has more than doubled, to C$82 billion. In the process, northern Alberta has become an environmental sacrifice zone: Tar-sands strip mining has created an apocalyptic landscape of oil-scarred tundra and toxic wastewater ponds.

Today, the tar sands produce nearly 2 million barrels a day. And the United States consumes virtually every drop: Canadian crude makes up 42 percent of American net oil imports. Until the current crash, it looked like the party was just getting started. In June, the Canadian Association of Petroleum Producers projected tar-sands output would double by 2025.

Canada has benefited from Harper’s oil boom — though less than you might imagine. In a quirk of Canadian law, the federal government collects no oil royalties. Its fortunes rise, indirectly, from oil, benefiting only from GDP growth and the surge in corporate and payroll taxes. The province of Alberta does collect oil royalties: C$5.2 billion last year alone. But far from socking that money away in a sovereign wealth fund — as Norway has done, amassing a portfolio worth more than $800 billion — the province has pissed it away on tax cuts. In 2001, Alberta instituted a flat tax of just 10 percent. To keep the working class on board, Alberta’s government eliminated health care premiums for the province’s version of Canada’s national health care. Ever since — notwithstanding years of inflated oil prices — the province has bled red ink, and it now faces a projected C$7 billion budget shortfall all on its own.

Alberta created nearly 50 percent of Canadian jobs in the past decade, but the province’s good fortune actually hurt the rest of the country. Canada now effectively has two economies, and they work at cross purposes. When oil is booming, the Canadian dollar is strong. That undermines the traditional manufacturing economy by inflating the cost of export goods like Canadian car parts. “As the dollar was rising because of higher oil prices,” Poloz said, it drove “destruction of the capacity to export.”

Until now, the Harper government has been happy to sacrifice industry for oil. Speaking last June, near the peak in crude prices, Harper’s dour finance minister, Joe Oliver, underscored the government’s conviction that Canada’s economic future hinges on massive oil reserves, not its Rust Belt manufacturing base. “The choice is stark,” Oliver told a summit of the International Economic Forum of the Americas in Montreal. “Head down the path of economic decline, higher unemployment . . . and growing debt, or achieve prosperity and security now and for future generations through the responsible development of our resources.”

*Note by SCNCC editors: There is one small correction to note in this article. It states that U.S. President Barack Obama has “vetoed” the Keystone XL tar sands pipeline. This is not accurate. On Feb. 24, the president cast a third and final veto against a bill to authorize the pipeline. The bill was an effort to circumvent the lengthy, ongoing examination of the project by the U.S. State Department. The State Dept. recommendation, or some equivalent, will ultimately determine whether or not Keystone XL will proceed. Keystone XL may be “on its “deathbed”, as the Rolling Stone writer asserts. Or maybe not…