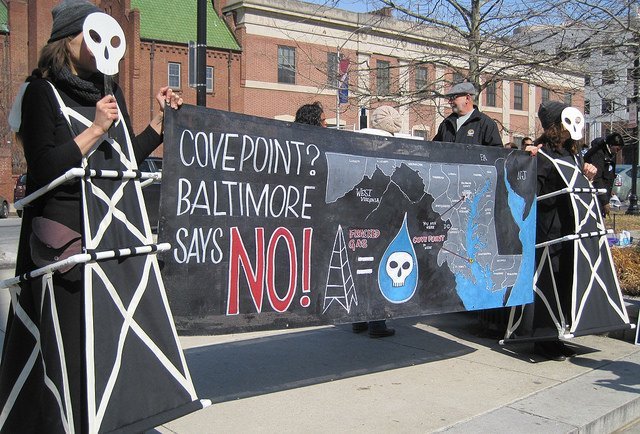 Cove Point is a sick joke from a dystopian novel

Natural gas has become the Obama Administration’s solution for what the White House describes as a “new clean energy future” in the United States. Hydraulic Fracturing, also known as fracking, is the gateway to this future. Yet, contrary to many of the talking points from the industry and the White House, this gas is attained dangerously and won’t necessary even stay in the U.S.

It was only a matter of time before a project like this got underway, thanks to to an uptick in fracking throughout the mid-Atlantic and Northeastern U.S. An export facility on the scale of Cove Point will only give more of an economic incentive to the natural gas companies to expand fracking throughout the region. The U.S. Forest Service is considering allowing gas companies to frack in the George Washington National Forest in Southern Virginia. Stories of drinking water becoming flammable in places like Pennsylvania can only cause stress to the people in the region, yet the Obama Administration has made it one of their priorities to fast track Cove Point.

According to the Chesapeake Climate Action Network:

The new liquefaction facility that Dominion would have to build on-site to process gas for export would emit more heat-trapping carbon dioxide than all but three of the state’s existing coal plants. In all, given the energy-intensive process of extracting, transporting and processing gas for export, Cove Point would trigger more greenhouse gas emissions than any other single source of climate pollution in Maryland.

The facility would become the fourth largest emitter of CO2 in Maryland behind three separate coal fired power plants already functioning. Maryland’s Governor Martin O’Malley sponsored a study that examined sea-level rise projections in Maryland with some disturbing results. From what sounds like a sick joke from a dystopian novel, the area of Cove Point is projected to be underwater if climate change continues at the level it is occurring now.

Dominion claims the export facility will create 3000 temporary and 175 permanent jobs but, according to Chesapeake Climate Action, if the money were redirected into wind energy in Maryland, it would give birth to 7,500 jobs. Despite these findings the Federal Energy Regulatory Commission (FERC) gave the green-light for the building of Cove Point after their environmental impact report on May 15th stating. The export facility “would not result in significant cumulative impacts,” FERC claimed. Though this was disappointing, it was not a surprise; the commission approves the vast majority of proposals that the gas industry puts before it.

Cove Point represents the next step in the fracking renaissance. The gas it exports will go to the highest bidder on the global market and will take even more dirty fuel energy to get it to it’s final location. Facilities like Cove Point expose the true nature of our energy regulatory system; profit rules without consideration for the health and well being of people and their environment.

Chesapeake Climate Action Network together with System Change Not Climate Change and other environmental groups will be rallying in D.C. on Sunday, July 13, marching from the Capitol building to FERC’s offices. We will be voicing dissent to the Cove Point project and more broadly against the continued fracking in the region. Join us!