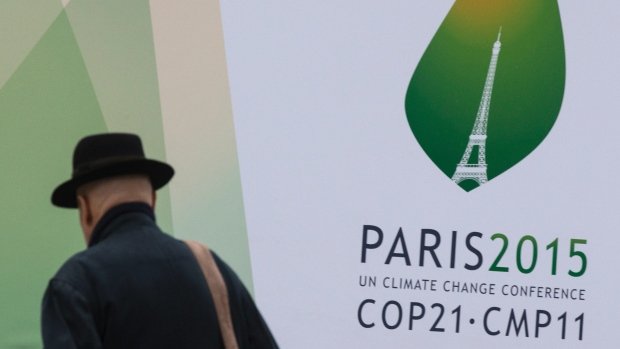 “As I see it, the world may be warming, but politics are frozen. We talk endlessly of climate change and yet we have not created any climate for change.”

After 20 years of meetings and failed attempts to limit carbon emissions, annual emissions this year are 60 per cent higher than when United Nations Climate Talks began in 1990. In the lead up to this year’s meetings at the “Committee of the Parties” (COP 21) conference in Paris, countries have submitted pledges in the form of “Intended Nationally Determined Contributions (INDC)” that observers have noted will still commit the world to catastrophic levels of warming.

Reading the draft version of the Paris Agreement, many in both the mainstream and alternative press point to another impending tragedy in Paris in which “emission cuts will be voluntary, flexibility mechanisms will be continued, more market mechanisms will be proposed and accounting loopholes and techno-fixes will abound.”

The idea that Paris COP 21 will be no different than the previous twenty COP iterations is supported by argument that “business-as-usual” complacency will be driven by the same corporate control witnessed at previous meetings. As John Foran argues in “Just Say No to COP 21,” funding for the meeting comes from major fossil fuel companies and carbon emitters; inside the meeting rooms will be the largest corporations in the world, industry lobbyists, the global political elite who control the systems and infrastructure of globalized capitalism — the media, the food systems, economic and trade relationships, the formal electoral processes, and so on.

If past COP meetings are any indication, says Foran, these interests will inevitably declare victory, reconfirm their commitment to a number of market-based efforts that are doomed to fail, and couch Paris negotiations as a victory for humanity that sets us on a course of complete resolution by “reaching carbon budget targets” at some far off date (say by 2050 or 2100).

The backdrop to all the attention that is focused on the Paris meetings, and regardless of the perceived “energy revolution,” the global productive and consumptive system is still firmly based in fossil fuel energy and capitalist imperative that will continue to commodify and metabolize nature at an ever increasing pace. Because of their structuration within the global capitalist system, governments around the planet, including the new Canadian Liberal regime of Justin Trudeau must refuse to accept mandatory cuts in GHG emissions, must continue to open the world’s “resources” to exploitation through the new corporate constitutionalism of the Trans Pacific Partnership (TPP), and more generally, must reject any threat to continued economic growth.

Already, we know that the Liberals support Keystone XL, Kinder Morgan Trans Mountain and Energy East pipelines. Trudeau argues for “balance” in preventing oil tankers from plying British Columbia’s wild coasts but supports liquified natural (fracked) gas (LNG) shipping through the region (an industry that would have catastrophic impact on climate). Thankfully, Trudeau does not position himself as an outspoken vocal champion of a Harperite fossil fuel driven staples economy that relies on the decimation of Canada’s environmental regulatory apparatus, and a colonial expansion deeper into First Nations territory. But as leader of a state and nation with an built-in expansionist capitalist and colonial dynamic with its own structural imperatives, it is difficult to see his new and young team of idealists can reach towards anything substantively different in Paris.

All these policies are self-evident and givens, while the world’s governments are still “locked-into” supporting the demands of capitalist laws of self-expanding value. The question however remains, does the context of the deepening climate crisis matter? In the light of the dramatically increasing climate impacts and extreme weather events witnessed around that globe, and the scientific evidence to back up their rootedness in global warming, will governments recognize in the interests of their own self-preservation that business-as-usual is an increasing threat to the endurance of the system? Chris Williams argues that questions of addressing climate change are about confronting the much larger question the future of capitalism:

Changes to capitalism are the most likely to come about internally through shifts in profitability that force shifts in economic practices; through class warfare, which makes some forms of production or social relations unacceptable; through profitable technological innovation; or through the political influence of corporations that identify and act on the geopolitical and economic interests of the capitalist class as a whole.

If Williams is right, then the decisions relevant to the Paris COP 21 meetings will not be made in Paris, but in one of two other places: in the back rooms of the meeting places of the global corporate elite, or in the streets outside the Paris meetings in the form of the global climate justice movement and their allies. Many in the climate justice movement argue, especially after the spectacular failure of the Copenhagen COP meetings, that because of the intransigence of the corporate agenda, (sometimes disguised as progressive) any chance of progress will depend on the voice of civil society and a growing “climate justice movement” (comprised of NGOs, trade unions, youth, faith groups and other grassroots organizations) both in Paris and post-Paris.

Within Canada, the movement is exemplified in the growing relationships between the labour and climate activist communities embodied in the Leap Manifesto. It is expressed in multiple grassroots actions including the recent “Climate Welcome” campaign that brought Ontario and Ottawa activists to the doorstep of the Prime Minister’s home to encourage Trudeau to immediately prioritize climate as the most pressing policy and political issue of the day. At the forefront of climate activism in British Columbia this movement is represented in the enduring anti-colonial struggles of First Nations and their settler allies in actions such as: Unis’to’en Camp, Madii ‘Li Camp, Lelu Island campaign and St’at’imc Junction Creek Camp. It is symbolized in multiple dispersed and unique local campaigns springing up in our cities across Canada.

In Paris, this movement promises the largest ever mobilizations and parallel events, conferences, civil disobedience actions and demonstrations. The “Redlines” campaign involves “blockades” around the United Nations conference centre, composed of three rings. Inside the conference centre the first ring would prevent inadequate agreements from finalizing. The second ring will be at the conference exits and blocking transport hubs to prevent the delegates who have not generated adequate outcomes from leaving. The third ring will be the global actions of solidarity in the form of Blockadia. Organizers intend for Redlines to appear everywhere around the world in direct actions against fossil fuel infrastructure.

The calls for a continued Redlines campaign will follow the Paris meeting in April 2016. The hope is that the Paris confrontation will not be an end in itself, but will stimulate, or contribute to a on-going “culture of resistance” that moves into the mainstream and create conditions where civil disobedience will become normalized. Similarly, the Global Climate Games hope to produce a “climate for change”, in which non-violent civil disobedience and a “culture of resistance” becomes central aspect of climate justice strategy.

Many of these new style campaigns were not present in previous global climate summits, but derive from the “post-Copenhagen” sentiments of seasoned activists, exhausted from previous exertions of crushed utopian optimism, and who seek to delegitimize corporate sponsored spectacle enough to apply more pressure on the institutions that are seen the problem, rather than the solution.

Far from a destructive nihilist impulse, the strategy of Paris climate justice activists and their counterparts around the world, is two-fold — a show of force and determination on the streets to help push negotiators to step-up their game; as well as empowering the campaigners themselves to assume more of the mantle of leadership from the grassroots and drive civil society and average people to engage more fully in their future.

Activists are firmly aware of the threat of more failed attempts at international cooperation for those most vulnerable, and are particularly attuned to the voices from the Global South who desperately desire positive outcomes from Paris, and who suffer first-hand from the brunt of climate impacts already. But even those voices are hardened to the realities. “I won’t be going to Paris wearing the usual friendly, compliant Pacific smile,” warns the Fijian Prime Minister. “In fact, I won’t be going to Paris in a Pacific frame of mind at all. I fear that our interests are about to be sacrificed.”

So we arrive at two possibilities. First, the corporate world and their government enablers will take climate science and the examples of extreme weather and impending catastrophe seriously (either voluntarily or under duress), recognize their interest in averting climate disaster (that is, their class interests as a whole), and open up to unprecedented change. Second, the “climate justice movement,” those that recognize that questions of equality and climate are intimately connected, will challenge the climate crisis by effectively challenging capitalism itself. After 21 COP meetings it is a stretch to have faith in the former. Watching its vibrant growth and creativity of that last few years, it is easier to envision a break-through from the latter.

For all those participating in the upcoming Paris meetings, the “two degree target” (and now revised 1.5 degrees Celsius target) must be soberly recognized as the “point of no return” that sets the world on a course of runaway climate change and consequent breakdown in economic, political and social conditions. As many have commented, including Naomi Klein and Mark Jaccard, only “radical” change of direction can avert this future.

This all begs the question: can a Canadian government engage in a set of domestic and international policies consistent with treating the climate crisis as a global emergency that threatens our actual existence on the planet, and at the same time, do so in a politically and economically viable manner?