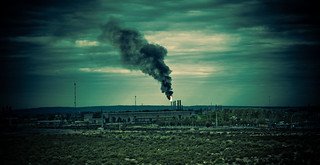 COP26: What We Need and What We Got

Many of the world’s leaders met in Glasgow for the UN Conference on Climate Change. Did they make progress on saving us from the climate disasters humanity is facing as rising greenhouse gas emissions are warming the planet? Speeches were made and so were many promises, but were they adequate and will they be kept? So far previous agreements have had little effect.

Richard Smith evaluates COP26 and points a way forward to what needs to be done. He is author of Green Capitalism: The God That Failed and China’s Engine of Environmental Collapse. He argues that since 1992 when 150 nations first met at Rio and agreed in principle to stabilize or suppress CO2 emissions enough to prevent climate catastrophe, their annual “summit meetings” have collapsed in failure and acrimony over this fundamental contradiction: No industrial nation will agree to fixed limits on its emissions because all understand that suppressing emissions means suppressing growth.

Richard Smith contends that given the desperate state of the planet today, and given the decades-long failure of the major industrial nations, in particular the US and China, to suppress their emissions, we find ourselves facing climate emergency which leaves us no choice but to effect an emergency rescue plan: dramatically shut down and/or draw down (retrench) industries across the economy from fossil fuels to autos, aviation, chemicals, construction, manufacturing, tourism and many more—because if we don’t find ways to rationally and fairly suppress our overconsumption of resources, nature is going to do it for us in a most unpleasant manner. We live on a planet with limited resources but we live in economic systems— capitalism and, in China’s case, a hybrid Stalinist capitalism—that demand unlimited growth and consumption.

Smith argues that we are not doomed, that there are viable ecosocialist alternatives to our current suicidal trajectory, and moreover, the worse our ecological crisis becomes, the more obvious it is to people around the world that our capitalism and its variants offer no solution, that the only hope is wholesale economic and political transformation. He argues that this transition from capitalism and Stalinism to some sort of ecosocialism is possible, at least in part, without violent revolution.

CLICK HERE for his recent article, An ecosocialist path to limiting global temperaturerise to 1.5°C or HERE for his article, Climate Arsonist Xi Jinping: A Carbon-Neutral Economy with a 6% Growth Rate?