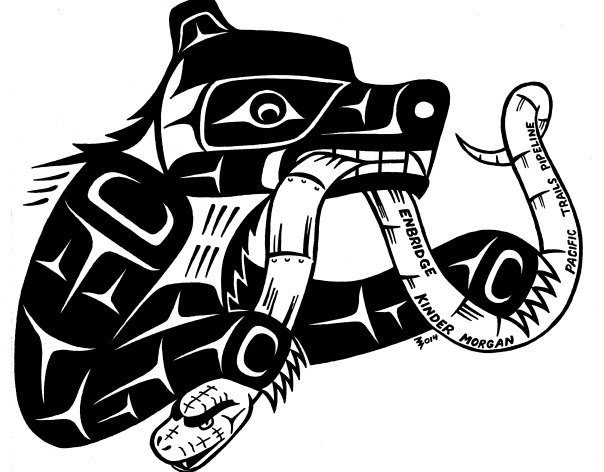 Conflicting messages about conflict: the “battle” against Enbridge

With the federal government’s approval of the Enbridge Northern Gateway pipeline on June 17, 2014, there arose a chorus of angry disapproval from many people in BC. Some talked about waging a “war against Enbridge,” while others proclaimed the beginning of the “battle.” Predictably, the political parties opposed to the Conservative government promised to put a stop to Enbridge, if elected. Those who have worked to oppose Enbridge over the past 5 years renewed their pledges to carry out court cases, referendums, voting campaigns, as well as civil disobedience.

In fact, the “Hold the Wall” campaign initiated by the Yinka Dene Alliance claims that over 22,000 people have pledged to do just that, “using all lawful means.” But what if a court decides its unlawful to “hold the wall”? Those with perhaps the most realistic grasp of the situation have renewed their calls for direct action, if and when necessary, to physically stop the construction of the pipelines.

Clearly there are mixed messages being transmitted.

There has been a lot of talk of civil disobedience in the anti-Enbridge campaign. Which is ironic, considering that those who have thus far managed the protests have been very clear about following all “lawful means.” It’s ironic because civil disobedience by its very nature implies illegal acts.

Both Gandhi and Martin Luther King, the icons of pacifist ideology and the grandfathers of civil disobedience, encouraged tens of thousands of people to engage in illegal actions. This included defying laws against public gathering and protests, racial segregation, collecting salt, carrying out boycotts, etc. For breaking these laws, Gandhi, King, and thousands of their followers were sent to jail.

The idea that we must use only “lawful means” is clearly impractical. If this were the case, only court cases, referendums and voting campaigns could be used to stop the pipelines. But the promises of civil disobedience emanating from many different sectors clearly show that many see the potential necessity of engaging in illegal means as well—civil disobedience.

In other ways, however, civil disobedience is not a form of direct action. When hundreds of people were arrested in front of the White House in protest against the Keystone XL pipeline in August 2011, they engaged in civil disobedience, but they didn’t directly stop, disrupt or delay anything. That’s because it wasn’t a direct action, it was a protest.

Activists lockdown on backhoe used in construction of the Keystone XL pipeline in Texas, Sept 24, 2012.

Over the course of several days, protesters had sat down and refused orders from the Park Service to move along, and were subsequently arrested. Most had to pay a $100 fine. When construction of the southern leg of the Keystone XL pipeline began in August 2012, there were a few acts of civil disobedience, including lock downs and tree sits. But these were relatively small in number compared to the hundreds who volunteered to be arrested for media coverage prior to the actual construction phase.

During the civil rights struggle in the US during the 1950s and early ’60s, it was found that many of those arrested for civil disobedience were extremely reluctant to be arrested a second time.

Anyone committed to civil disobedience should at least ensure that their participation is a direct action which actually stops, disrupts or delays whatever it is they want to see stopped, and not just a symbolic arrest designed to gain media attention.

The anti-pipeline movement has proposed five strategies to stop Enbridge: court challenges, a provincial referendum, a voting campaign to defeat Conservative members of parliament (MP) in the next federal election, civil disobedience, and blockades.

There are as many as a dozen potential court challenges that could be brought forward by Indian Act band councils and environmentalist groups. The basic premise of the Aboriginal rights argument is that the federal government failed to properly consult with the band councils. Environmentalist groups are filing lawsuits based on legal and technical errors made by the joint review panel. Five legal challenges have already been submitted. According to advocates of the legal strategy, court challenges could delay completion of the Enbridge pipeline by years.

In February 2014, a district court judge in Nebraska declared the law that allowed for the Keystone XL pipeline’s route through the state unconstitutional. It’s now awaiting review at the Nebraska Supreme Court. In April, the State Department announced it was indefinitely extending the inter-agency review of the pipeline, citing ongoing litigation over a Nebraska law that allowed the pipeline’s route through the state.

This does not mean the Keystone XL pipeline is defeated, however, only that it has been delayed. The same could apply to the Enbridge Northern Gateway pipeline.

A referendum would first require gaining the signatures of ten percent of voters in all 85 provincial ridings over a period of 90 days. That is, in each riding, ten percent of voters must sign. This petition, if successful, can be introduced as a bill in the legislature or put to a public vote (a referendum). If more than half the population were to vote against the Enbridge pipeline, the decision would have to be introduced as a bill in the legislature, where MLAs would then vote on it. The only successful referendum to date has been the one against the Harmonised Sales Tax (HST), held in the summer of 2011 and which extinguished the tax.

The next federal election is scheduled for 2015, and both the Liberals and New Democratic Party (NDP) have vowed to reverse the Enbridge approval if elected. These political promises have inspired many to renew their anti-Harper rhetoric in the hopes of swaying voters. One problem with this strategy is that the Enbridge Northern Gateway is primarily a concern of voters in BC, not the entire country. And even if elected, there’s no guarantee politicians would honour their promises (being the opportunists that they are).

In 1989, for example, Mike Harcourt, then leader of the BC NDP and future premier, called the decision by the ruling Social Credit Party to log Carmanah Valley on Vancouver Island “cowardly” and vowed that an NDP government would end the “war in the woods” by protecting old growth forests. In 1993, two years after gaining power, Harcourt’s NDP regime authorized the logging of old growth forest in Clayoquot Sound.

Many Indian Act chiefs and environmentalists have vowed to “stop the bulldozers” using civil disobedience, presumably laying in the path of construction equipment and getting arrested. Other forms of potential civil disobedience could include “sit-ins” of MPs offices, a few lock downs, and perhaps some tree sits.

The most forceful of the proposed strategies, blockades would be comprised of groups sitting in the path of construction equipment and getting arrested. One of the primary examples being promoted is that of the anti-logging campaign in Clayoquot Sound in 1993, during which over 850 people were arrested over the course of three months, eventually succeeding in putting a stop to proposed clear cut logging of old growth forest.

An anti-logging protestor is carried away by RCMP after being arrested for blocking Macmillan Bloedel logging trucks at the entrance to Clayoquot Valley on July 30, 1993.

Of these 5 strategies, only civil disobedience and blockades actually involve mobilizing people into action. Court cases are the work of highly paid lawyers and technical advisers. Referendums are the work of lobbyists and door-to-door canvassers. Voting for political opportunists who change their tune once in power is never a good strategy, and only serves to legitimize their rule.

Direct action campaigns, on the other hand, rely on the people. Their mobilization and active participation in direct action can be an empowering and radicalizing experience. But this depends on how the struggle evolves. If it’s left up to the band councils and ENGOs, any acts of civil disobedience will be almost entirely symbolic and designed to gain media attention. This is because when they talk about “war,” they actually mean lawyers in the courts, not warriors at the blockades.

The potential drawbacks of civil disobedience and blockades as carried out by the band councils and ENGOs are that hundreds of people are symbolically arrested and the construction of the pipeline continues, despite some minor delays. This is what occurred during the construction of the southern leg of the Keystone XL pipeline (known as phase 3, the Keystone Gulf Coast Extension). The construction began in August 2012, saw numerous acts of civil disobedience such as lock downs and tree sits, but was nevertheless completed in January 2014.

Some of the proposed pipeline projects intended to bring Tar Sands oil from Alberta to coastal refineries.

And while many people are opposed to the Enbridge pipeline, there are numerous other oil and gas pipeline projects that are proposed for BC, as well as an expansion of coal and other mining projects. For transporting Tar Sands oil, Enbridge is already pursuing the Line 9 reversal, and TransCanada has proposed the Energy East pipeline, both of which would bring the oil to the east coast. Kinder Morgan wants to expand its Trans Mountain line (which already carries Tar Sands oil to a refinery in Burnaby, BC), and also proposes to construct a northern pipeline to carry Tar Sands oil to the central coast.

And what if, as some have suggested, the Enbridge pipeline is just a smokescreen, a lightning rod now intended to draw the wrath of public opposition, while all the other proposed pipeline projects are phased in? The Pacific Trails Pipeline (PTP), for example, is already under construction. Promoted as a safer alternative than Tar Sands oil, this pipeline is intended to bring gas obtained through fracking in north eastern BC to refineries in Kitimat. Aside from the toxic impact of fracking, not only is the PTP to be built on a similar right of way as that proposed for Enbridge (and for this reason has been described as a “trail blazer”), natural gas lines can also be converted to oil pipelines. This is what TransCanada’s Energy East proposal is based on; converting an already existing natural gas line to ship Tar Sands oil to a refinery in St John, New Brunswick.

For these reasons, those who are serious about defending the land and water should have a longer term view than simply stopping Enbridge, while acknowledging that the anti-Enbridge campaign has the potential to contribute to a broader and more radical resistance movement. But this will require the formation of an autonomous grassroots resistance movement that isn’t managed or controlled by the band councils and ENGOs.