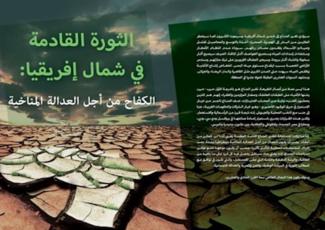 The coming revolution in North Africa: the struggle for climate justice

Jadaliyya (J): What made you put together this book?

Hamza Hamouchene and Mika Minio-Paluello (HH & MM-P): The idea was both to highlight the violence of climate change in North Africa, and the need for an indigenous response. We wanted to point out that survival relies on structural change, and on facing the challenge of talking about climate justice in Arabic.

Climate change is already a reality in North Africa. People are dying and communities are being forced off their lands, with stronger and more frequent droughts and winter storms, as deserts grow and sea levels rise.

There is a growing literature in Arabic on the threat, but this knowledge production is dominated by neoliberal institutions like the World Bank, the German Gesellschaft für Internationale Zusammenarbeit (GIZ), and European Union agencies. They highlight the dangers of a warmer world and they argue for urgent action. But their analysis of climate change does not include questions of class, justice, power, or colonial history. They re-empower those who have wealth, and their vision of the future is marked by economies subjugated to private profit and further privatization of water, land—even the atmosphere.

There is no reference to the historic responsibility of the industrialized West for causing climate change, of the crimes of oil companies like British Petroleum and Shell, or the climate debt owed to the Global South. Most Arabic-language writing on climate change in the Middle East and North Africa includes no references to oppression—or to resistance.

We wanted to point to the failure and bankruptcy of the global climate talks. These have been hijacked by corporate power and private interests that promote profit-making false solutions like carbon trading, instead of forcing industrialized nations to reduce carbon emissions and leaving fossil fuels in the ground.

Through compiling and editing this book, our goal was to counteract the dominant neoliberal discourse on climate change in Arabic, and point to the need for a revolutionary alternative grounded in justice.

J: What particular topics, issues, and literatures does the book address?

HH & MM-P: We think this is the first book in Arabic to address climate justice (though we would be really happy if that is not the case!). It includes six essays on climate violence and false solutions in Egypt, Morocco, Algeria, and the wider region.

A further fifteen essays introduce inspiring and liberating perspectives advanced by radical and progressive intellectuals, activists, politicians, organizations, and grassroots groups from the Global South. We selected essays, interviews, and statements in which social movements describe what they are fighting against, how they are organizing, and what they are demanding. The chapters cover a broad geography—from Ecuador to India, South Africa to the Philippines.

The book addresses the burning issue of climate change in North Africa and the Global South through a justice lens rather than a security one. A future framed around “security” subjugates our struggles to a conceptual and imaginative framework that ultimately re-empowers the state’s repressive power. Through the different articles and essays, we argue that the climate crisis is the epitome of capitalist and imperialist exploitation of people and the planet. Climate change is a class war—a war by the rich against the working classes, the small farmers, and the poor who carry the burden on behalf of the privileged.

There are four sections in the book, with twenty-one chapters. The first section, “The Violence of Climate Change,” highlights the scale of the threat posed by climate change. The second section, “System Change Not Climate Change,” points to the economic and power structures driving climate change, and what a different system should look like. The third section, “Beware the False Solutions,” examines how the powerful have attempted to use the climate crisis to profit and entrench inequality by pushing false solutions. The final section, “Organizing for Survival and Climate Justice,” looks at how people are mobilizing for a different future.

J: Who do you hope will read this book, and what sort of impact would you like it to have?

HH & MM-P: Given the pressures of authoritarianism, mass repression, and widespread poverty, it is understandable that limited attention has been paid by social movements or the left in North Africa to climate change in the past. The book is in a way a form of solidarity with the left in North Africa in their struggle to articulate a localized, democratic response to climate change, incorporating political, economic, social, class, and environmental analysis.

In many ways, climate change offers the left a chance to reshape politics. Coping with the dramatic transformation will require a break with the existing militarist, colonial, and neoliberal projects.

We also hope that environmentalists in North Africa will find this book useful. Climate politics in the Arabic-speaking world is controlled by the rich and powerful. The jobs, the funding, and the opportunities around environmental issues are mostly corporate or tied to institutions like GIZ or the International Finance Corporation (IFC). This makes the politics conservative and stifling, and leaves environmentalists stuck in narrow bubbles, and struggling to connect with the mass movements needed to win.

Ultimately, the aim is not to tell people in North Africa what to think, or which concepts to use, but to offer some starting points, some challenges, and some questions. What does a just response to climate change look like in North Africa? Does it mean mass evacuation, and open borders to Europe? Does it mean payment of climate debt and redistribution—by European governments, by multinational corporations, or from rich local elites? Does it mean a radical break with the capitalist system? What should happen to the fossil fuel resources in North Africa that are currently being extracted in large part by western corporations? Who should control and own renewable energy? What does adapting to a changing climate mean, and who will shape and benefit from it?

We hope that this book can contribute to the emerging political economy of climate change in North Africa that investigates the relationships between fossil fuel industries, regional elites, and international capital.

J: In your introduction, you talk about the need for a vocabulary in Arabic to articulate the struggle for climate justice. Can you tell us more about this?

HH & MM-P: Translating the articles and essays into Arabic has been challenging, as many of the phrases and terms do not exist. How can we fight something if we don’t have a name for it and can’t articulate what we want instead? While “environmental justice” is used in Arabic, “climate justice” is not. The phrase is used widely in both Latin America and English-speaking countries. But it sounds very strange—almost silly—in Arabic. We need to change the energy systems around us—but can we talk about “energy justice” and “energy democracy” in Arabic?

We need a vocabulary to talk about these issues in Arabic, to describe the vision of a safe and just future that we can fight for. Simply importing terms and concepts from other parts of the planet will not work—for ideas to resonate with people in North Africa, they must have a grounding in North Africa. But it is still useful to interact with and learn from movements elsewhere.

Many of the articles in this book demand climate justice, environmental justice, and energy justice/energy democracy. There is no single definition for any of these concepts, but that does not undermine their value. We think it is up to the reader to decide whether these concepts are relevant to North Africa.

J: How do you see the struggle for climate justice as being linked to other revolutionary movements in North Africa?

HH & MM-P: For us, “climate justice” usually involves a recognition of the historic responsibility of the industrialized West in causing global warming and bears in mind the disproportionate vulnerabilities faced by some countries and communities. It recognizes the role of power in shaping both how climate change is caused and who carries the burden. This is shaped by class, race, and gender, by colonial histories of exploitation, and by ongoing capitalist exploitation. Climate justice means breaking with “business as usual” that protects global political elites, multinational corporations, and military regimes, and a radical social and ecological transformation and adaptation process.

To come back to North Africa, those whose lives will be changed the most by climate change are the small farmers in the Nile Delta, the fisherfolk of Jerba, the inhabitants of In Salah in Algeria, the millions living in informal settlements in Cairo, Tunis, and Algiers. But they are sidelined and prevented from shaping their future. Instead, energy and climate plans are shaped by military-controlled governments and their backers in Riyadh, Brussels, and Washington, DC. Rich local elites collaborate with multinational corporations, the World Bank, and the European Bank for Reconstruction and Development. For all the promises, the actions of these institutions show that they are all enemies of climate justice and survival.

Therefore, the struggle for climate justice must be fiercely democratic. It must involve the communities most affected, and be geared towards providing for the needs of all. It means building a future in which everybody has enough energy, a clean and safe environment, a future that must sit in harmony with the revolutionary demands of the African and Arab uprisings, those of national sovereignty, bread, freedom, and social justice.