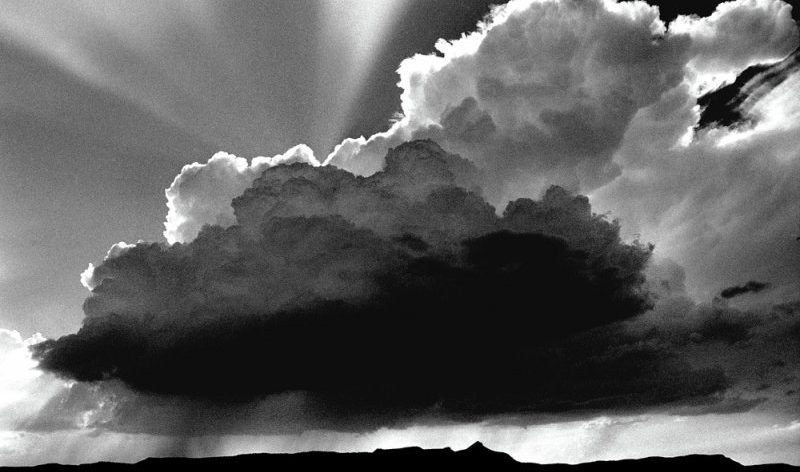 “The data shows major reorganization of the cloud system… I consider this as the most singular of all the things that we have found, because many of us had been thinking the cloud changes might help us out, by having a strong feedback which is going the other way instead of amplifying it.” — climate scientist Veerabhadran Ramanathan

“Our results suggest that radiative forcing by a combination of anthropogenic greenhouse gases and volcanic aerosol has produced observed cloud changes during the past several decades that exert positive feedbacks on the climate system. We expect that increasing greenhouse gases will cause these cloud trends to continue in the future, unless offset by unpredictable large volcanic eruptions.” — Evidence for Climate Change in the Cloud Satellite Record (emphasis added).

Scientists now have a satellite record of cloud behavior over the past few decades. What they’ve found is that, in response to Earth warming, cloud tops are rising even as clouds are forming at higher altitudes. This traps even more heat at the Earth’s surface. In addition, storms are moving north toward the poles, which means more sunlight hits the temperate regions near 40 degrees latitude both in the Northern and Southern Hemispheres. This northward movement of storms also causes the Earth to warm more rapidly. In the past, scientists had hoped that changes in clouds would shelter the Earth from some of the greenhouse gas warming caused by fossil fuel emissions. What we are finding now is that the opposite is true. The way clouds change as the Earth warms appears to be increasing the intensity of greenhouse gas warming.

Sowing the Clouds With Doubt, Denial and False Hope

Will the impacts of human-caused climate change be as bad or even worse than we feared? Will the Earth warm as rapidly or more rapidly than climate models suggest?

These are critical questions. Ones that revolve around the issue of how sensitive the Earth is to the added heat build-up initiated by a large and growing pulse of human-emitted greenhouse gasses. One whose answer will have lasting consequences for all those currently alive today and for many of the generations to follow. For if the answer to this question is yes, then we have responded too slowly to what is now a swiftly worsening global climate crisis (and, according to a new observational study, that answer appears to be, with growing certainty, YES).

(A new study has found that human forced warming drives the storm track toward the poles. This increases drought risk for places like the US Southwest. It is also a part of a larger cloud feedback that is found to have caused the Earth to warm more rapidly. Image source: LANCE MODIS.)

In relation to these questions is a noted relevant scientific uncertainty over the behavior of clouds in response to warming. Mainstream science has long produced state of the art climate models showing that changes in clouds due to Earth’s warming was likely a heat-enhancing (positive) feedback overall. And paleoclimate studies have tended to support the kinds of Earth System sensitivity to heat forcing that would result. But due to the fact that cloud behavior is difficult to model (and confirm through observation), there was a decent level of uncertainty in the science over the issue. And it is this seeming gap in our physical understanding that has spurred a big controversy circulating among climate change skeptics/deniers and the mainstream scientific community.

On the deniers side are people like Judith Curry, Roy Spencer, Richard Lindzen, and Anthony Watts (and their fossil fuel backers) who have broadly asserted that clouds respond to warming in a way that alleviates some of the added heat. The group also claimed that the cooling impact of clouds (negative feedback) was strong enough to reduce the Earth’s overall sensitivity to human greenhouse gas forcing to significantly less than the widely accepted 3 C Equilibrium Climate Sensitivity range (ECS — or about a 3 C warming over an approximate 100 year period for each doubling of CO2, or approximately double that warming over the long term). On the other side are the mainstream scientific heavy weights — including notables like NASA GISS’s Gavin Schmidt and Michael Mann of Hockey Stick notoriety — along with a large and growing body of studies producing evidence to support the cloud model essays.

The upshot has produced what could best be called a debate enabled to sow doubt (climate skeptics/deniers tend to receive funding from fossil fuel think tanks and other political bodies, which is a marked and glaring conflict of interest) between actual science and what might well be characterized as an intentionally misleading industry PR campaign.

(Climate change is a very serious threat. It threatens the existence of coastal communities like Miami, Norfolk, and New York City, it’s putting the US Southwest into an increasingly dangerous drought and water shortage situation, it’s driving vector driven illnesses like Zika out of their tropical zones, it’s threatening the stability of global food supplies, it’s forcing mass migration on a scale worse than warfare and conflict, and it’s pumping up the intensity of the most extreme weather events. Despite glaringly obvious trends revealing worsening climate states, just 41 percent of the American public views climate change as a serious threat. This is in large part due to confusion sown by climate change skeptics and deniers. Image source: Gallup.)

Wrapped up by this doubt-sowing were a number of scientists who simply seemed to hope that something (even changes in clouds) would give humankind enough time to make the tough policy choices needed to respond to human-forced warming. This group included a number of well-intending individual scientists who simply appeared unwilling to unequivocally accept the stark implications coming from the model assessments and from the paleoclimate proxy data.

Unfortunately, uncertain understanding of how clouds respond to warming has served either as false comfort or fed into yet one more climate change skeptic/denier based doubt-sowing delaying tactic for much-needed global policy action on climate change.

Now, a new observational study headed by Joel Norris has helped to clear up some of this uncertainty. The study used satellite based observation of cloud behavior over the past 25 years to confirm that alterations in Earth’s cloud  cover is producing an amplifying feedback to human caused climate change. In other words, the heat provided by human fossil fuel emissions is forcing the clouds to respond in ways that warm the Earth even faster.

At issue are two big mechanisms. The first is that warming up the Earth’s atmosphere is observed to be forcing the storm tracks toward the poles. This pole-ward movement is resulting in less overall cloud cover for the middle latitudes. Less cloud cover in this region reduces the coverage of bright, reflective clouds which, in turn, generates a loss of Earth reflectivity (albedo). As a result, more of the sun’s rays enter the Earth’s lower atmosphere in this zone which causes the atmosphere to heat up.

The second big cloud feedback mechanism was an observed increase in upper level cloud formation. This is important because high level clouds act as a blanket, trapping more of the Sun’s heat in the atmosphere. What the study found was that cloud tops were both rising even as the number of clouds at higher altitudes was increasing.

(Higher cloud tops and less cloud cover in the middle latitudes means that the Earth warms faster due to human greenhouse gas emissions. In addition, a poleward movement of the storm track facilitates drying across many continental regions including Brazil, the US Southwest, Europe, and parts of Africa, Asia, and Australia. Image source: Evidence for Climate Change in the Cloud Satellite Record.)

This combination resulted in an observed increase in radiative forcing on the order of 0.39 Watts per meter squared. That’s about a 12 percent increase above and beyond the base additional greenhouse gas forcing currently provided by human beings. In other words, the way clouds respond to human greenhouse gas emissions caused the world to warm up even faster.

In addition to these changes that add heat to the Earth System, there is one noted significant knock-on effect. Loss of clouds in the middle latitudes results in less rainfall for places like the Amazon Rainforest, the US Southwest, and large parts of Europe, Africa, Asia, and Australia. In this way, shifting storm tracks are an enabler not only to amplified global warming, but also to the increasingly prevalent and severe droughts and wildfires that we are now seeing in many of the most highly populated parts of the world.

The new study appears to be robust and has received support from a number of scientists including Dr. Michael Mann, and Veerabhadran Ramanathan. And in response to those sitting on cloud fences, Ramanthan notes in the Washington Post:

“I consider this as the most singular of all the things that we have found, because many of us had been thinking the cloud changes might help us out, by having a strong feedback which is going the other way instead of amplifying it… The uncertainty is narrowing down. I used to say, if I made a 50 percent overestimation of the global warming, it was due to the clouds. But we are running out of that excuse now.”

Evidence for Climate Change in the Cloud Satellite Record