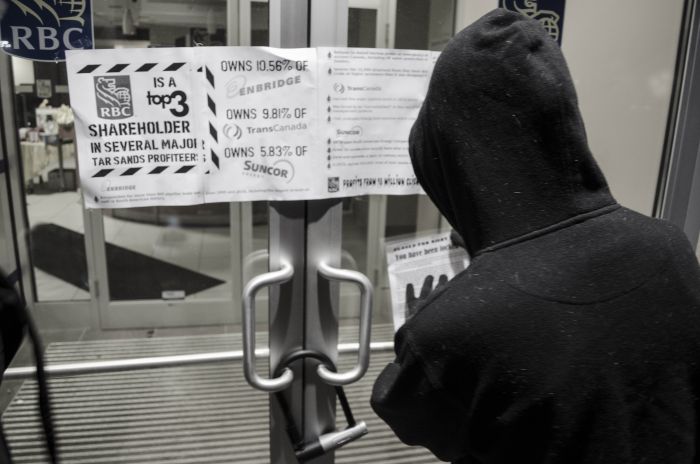 This morning more than a dozen affiliates of Enbridge and the Tar Sands have been locked out of their workplaces throughout Ontario.  Individuals in 9 cities have participated.

Doors to banks, political offices, and other institutions associated with Enbridge have been locked or otherwise disabled, with “Closed for Risky Business” notices posted.  These notes all convey the same message:

“Good people cannot simply watch as the government and big business dismantle protections and poison our communities for profit, so today we call attention to companies that enable Enbridge to continue destroying for profit – their financiers and contractors; their facilitators and publicists. Those who manage their security and their planning, approve their permits and projects – and any other players who passively take part in eco-destruction while operating business as usual.”

The National Energy Board has already had to crack down on Enbridge’s Line 9 project this year for negligence and safety concerning watercourses line 9 crosses however, anti-Line 9 activists are adamant that the public cannot rely on the NEB to be an effective watchdog since environmental protection is not in their mandate.

Additionally, annual reports show that NEB Regulated Company Incidents have more than doubled since 2003 and that 2013 alone saw more than 1000 major pipeline spills in Canada. In that same year, the NEB only issued 283 Notices of Non-Compliance and 8 Inspection Officer Orders.  Currently, the Board is facing legal pressure for Treaty violations and ineffective public consultation regarding Line 9 while also receiving sharp criticism for celebrating the public’s inability to ask questions as a success.

Ten million people live along the route of the Enbridge Line 9 pipeline: a high-pressured oil pipeline that’s more than 40 years old and has leaked at least 35 times.  The pipeline walls are 30% thinner than modern pipes and during inspection with their own in-line tools Enbridge found nearly 13,000 anomalies.  Instead of repairing these areas, however, Enbridge filed to perform visual inspections for just a fraction of them and then, in August 2014, filed to cancel 162 of those inspections to meet their in-service deadline.  While Enbridge seeks to have the line approved to run soon, there are currently only 6 of the required 104 emergency shut off valves for major water crossings.

Land defenders also want to draw attention to line 9 directly contributing to the expansion of the Alberta tar sands – the largest industrial project on earth. It’s a project that has major impacts on carbon emissions and permanently contaminates approximately 8 million barrels of water each day. Much of this harm is felt by First Nations communities whose cultures and livelihoods continue to be decimated by industry.

The “Closed for Risky Business” bulletin summarizes the protest’s intent with the following message:

“We will continue to act until our message is heard.  We act because we care about keeping our water and air clean for our community and for future generations.  Will you?”