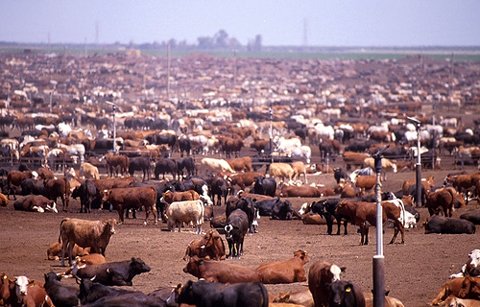 Climate tax on meat and dairy would sink emissions and diseases: study

Taxing the meat and dairy industries for their impact on climate would lead to lower emissions and save about half a million lives per year, according to the first global study of the issue, published Tuesday.

A 40 percent fee on beef and a 20 percent fee on dairy would counter the industries’ impact on climate change, as livestock release significant greenhouse gases while exacerbating deforestation, and would encourage people to consume less of each—which in turn would improve global health, according to the Oxford Martin Program on the Future of Food, part of the University of Oxford.

The study (pdf), published in the journal Nature Climate Change, finds that raising the price of beef by 40 percent would lead to a 13 percent decrease in consumption.

It is also the latest evidence that keeping global emissions below 2°C and preventing widespread irreversible damage cannot happen without global food system reform. Other recent studies have found that not only is Big Agriculture incapable of “feeding the world” as biochemical giants like Monsanto have promised, but that the focus must actually be on empowering local, small-scale farmers.

The United Nations warned last month that millions more people are at risk of being pushed into poverty and starvation by 2030 without radical system change.

“The food system is responsible for more than a quarter of all greenhouse gas (GHG) emissions, most of which are related to livestock,” the study states. “[R]educing the GHG emissions related to food production will have to become a critical component of policies aimed at mitigating climate change.”

Lead researcher Marco Springmann told the Guardian on Tuesday, “It is clear that if we don’t do something about the emissions from our food system, we have no chance of limiting climate change below 2°C.”

“[I]f you’d have to pay 40 percent more for your steak, you might choose to have it once a week instead of twice,” he said.

And a widespread drop in consumption would save about half a million people a year from deaths related to malnutrition, such as those from heart disease, diabetes, and obesity. He pointed to the recently enacted soda tax in Mexico, which raised soft drink prices by 10 percent in 2014, leading to a 12 percent drop in consumption by the end of that year; the Los Angeles Times noted last week that the tax is poised to “prevent 189,300 new cases of Type 2 diabetes, 20,400 strokes and heart attacks, and 18,900 deaths among adults 35 to 94 years old.”

The researchers assessed what kind of charges would need to be levied to make up for the climate impacts of meat and dairy, which have a heavy carbon footprint due to deforestation, methane emissions, and land and water use associated with feeding and keeping cattle. Exempting healthy food groups and using a system that researchers say would not burden low-income consumers with heavy taxes, while targeting a portion of the revenues for health promotion, would ultimately reduce climate emissions by 1 billion tons a year, the study found.

Springmann acknowledged that a meat tax might be a hard pill to swallow for consumers who get defensive over their food choices. But understanding the mission would help endear the public to the idea, he said.

“If people see any food price rise, they get angry, so you have to explain why you are doing it,” he told the Guardian. “Either we have climate change and more heart disease, diabetes, and obesity, or we do something about the food system.”