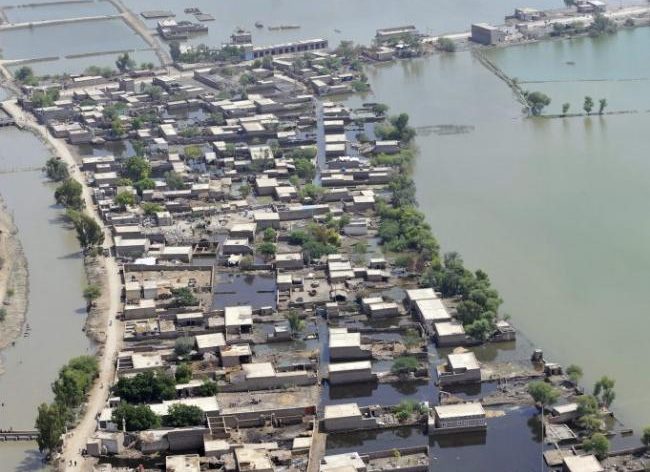 Climate Justice for the Marginalized

The countdown has already begun. Pakistan’s 5000 glaciers are retreating faster than in any other part of the world according to the Pakistan Economic Survey of 2014-15, and hence depleted freshwater resources. In 2010, the country was hit by unprecedented ‘super floods’ – described as a slow-moving Tsunami by then UN Secretary General Ban Ki-Moon – that affected more than 20 million people from the north to the south of the country. In June 2015, there was a killer heat wave in Karachi in which over 2000 people died. A prolonged drought in Tharparkar, cyclones, glacial lake outburst floods (GLOF), intrusion of saline seawater into the Indus River Delta region – Pakistan has faced all this, and more in recent years, as a consequence of climate change, which is burdening an already fragile economy.

Although Pakistan contributes less than one per cent to greenhouse gas emissions, it is among the countries that are most vulnerable to climate change, with very low technical and financial capacity to adapt to its adverse impacts. This poses a serious challenge to its economic and social development. The effects are already evident in the form of growing frequency of droughts and flooding, increasingly erratic weather, reduction in freshwater supply and the alarming and rapid loss of biodiversity. More critically, Pakistan is vulnerable due to its agro-based economy. There is some evidence, for example, as pointed out by Dawn columnist, Hajrah Mumtaz, that the traditional seasons for sowing and reaping crops and fruit is shifting, but “this is barely being discussed at policy level, despite the existence of a ministry for climate change…Our polluting practices, including our inability to curtail the use of polythene or to treat sewage or industrial effluent, is damning.” And, while the rest of the world is trying to move away from coal-fired power generation, “Pakistan is still in the process of setting up coal-fired plants.”

All these events constitute significant impacts of climate change. But is anyone paying attention?

Is it time to forget about climate change? Donald Trump’s pulling out of the Paris Climate Change Agreement could be the wake-up call we all need. Perhaps just focusing on climate change per se tends to cloud our judgement to larger social and moral obligations. Yes, climate change is real – numbers don’t lie; there has been an increase in hydro-meteorological (HM) disasters in the last 10 years, killing thousands in South East Asia, North America and the Caribbean. And yes, there has been an increase in CO2 levels in our atmosphere as a result of anthropogenic processes (changes in nature brought about by humans). But maybe it’s time to focus on protecting people from the devastation wrought by freak weather events rather than attempting to fight an unwinnable battle (getting countries to agree to cut back on greenhouse emissions etc). And that’s where climate justice comes into play.

So, what is climate justice? In a nutshell, it means justice for those most affected by climate change, especially those who have no voice to represent themselves. This new branch of the climate change debate has emerged as a result of assisting the most marginalised and been classified by scholars as ‘climate justice.’ Strategies to implement climate justice range from grassroots action to governmental level policy-making. However, the strategies will only work if they are closely interlinked. Developed for implementation in Africa and Asia, climate justice focuses on community education and solidarity as the key formula to surviving the wrath of climate change. Factors not even considered previously are going to have a significant impact on who will be most impacted by climate-related events. For example, sexual inequality in some countries is leading some experts to believe that women in general suffer more due to climate change: in the recent floods in Bangladesh, many of the women suffered much more than men as they did not know how to swim. Additionally, women are more exposed to fatal water-borne diseases such as malaria whilst collecting water, a duty almost exclusively fulfilled by women. Poverty is going to be the deciding factor in who suffers the most.

What practical steps are being taken to implement climate justice? The debates on climate change in Copenhagen in 2009 and Durban in 2011, show that the developed nations are slowly coming to an understanding, if not acceptance, of the consequences of over 100 years of unbridled industrialisation on the environment and on the ecosystem. The agreed Kyoto Protocol, which came into force in 2005, signed on by 192 parties, flawed though it may have been, was the correct initiative. Countries such as the USA did not sign on, and neither did the worst contributors to structural climate change in the 21st century – China and India. Now, after the Doha amendment, those nations that have not signed on to the current agreement, have voluntarily pledged to reduce emissions. But this is still very unclear and, most importantly, not legally binding.

In a fascinating, though chilling, article on ‘How Western Civilisation Could Collapse,’ on the BBC website on April 18, the author Rachel Nuwer, has quoted studies that posit two main factors – ecological strain and economic stratification – that can lead to a doomsday scenario. As history has shown, it is usually “a plethora of factors that contribute to collapse…and humanity is currently on an unsustainable and uncertain path.” The question is how close are we to the end?

Leaving aside the economic aspect, which may lead to a collapse on its own – Safa Motesharrei (a systems analyst at the University of Maryland, who uses computer models to gain a deeper understanding of the mechanisms that can lead to local or global sustainability or collapse), says that there is an optimum population level that an environment can sustain. However, “If the carrying capacity is overshot by too much, collapse becomes inevitable…(avoidable only) if we make rational choices to reduce factors such as inequality, explosive population growth, the rate at which we deplete natural resources and the rate of pollution – all perfectly doable things.”