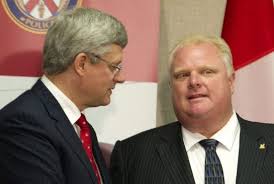 Toronto Mayor Rob Ford isn’t this country’s only global embarrassment; Prime Minister Stephen Harper’s appalling record on the environment and contempt for international diplomacy has also shamed Canada around the world. Though governments everywhere have handed over their national agenda to corporate interests, Harper’s conflation of the two has been total. His abject servitude to business, especially the oil industry, knows no bounds. In his recent speech to the Tory hordes in Calgary, the PM made this frighteningly clear: “In this party,” Harper declared, “we will not accept that environmental protection must stop economic development.”