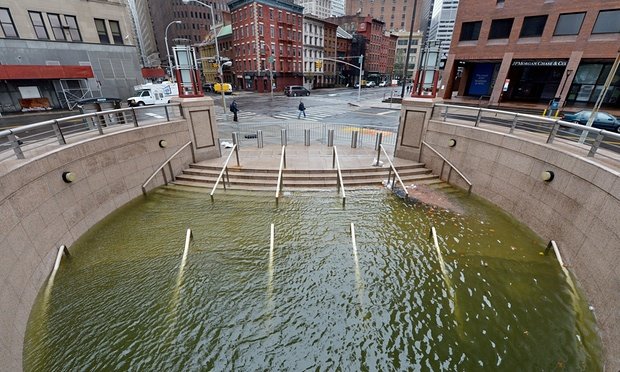 America’s biggest cities are at far greater risk of serious flooding in the coming decades than was previously thought, because of a “triple threat” produced under climate change, researchers said on Monday.

“Call it a triple threat,” said Steven Meyers, a scientist at the University of South Florida and one of the authors. “What this shows is that there is an increasing risk of compound flooding, from storm surge and rainfall at the same time.”

About 40% of the US population lives in coastal cities – where flooding in the wake of storms is already proving increasingly costly in built-up areas, swamping subway lines and electricity stations.

But the Nature study was among the first to explore the combined risks under climate change of sea-level rise, heavy rainfall and storm surges over broad stretches of the US coast.

In the case of New York City, the risks of flooding – because of that combination of factors – has doubled over the past 60 years, the researchers found. A 4ft storm surge, combined with 5in of rainfall, could be heading New York City’s way once every 42 years, compared to about once in a century in the 1940s.

The increased risk was due to the combination of storm surge, rainfall and flooding.

What that means is that it would not necessarily take a huge amount of rainfall to put New York or other cities underwater – a storm surge could do that on its own, Wahl said.