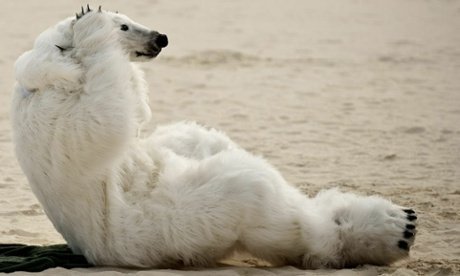 Climate change is real. Want to live? It’s up to people like you

Do I really have to march? It’s actually a serious question: I mean, marching’s rather … military, isn’t it? Bit aggressive. Bit too much like what the baddies on the other side would do, don’t you think? Wouldn’t you rather saunter? Or stroll? Mince, even? A hop, a skip or a jump – anything but stern-faced, humorless marching. And let’s face it: we’re probably going to need a sense of humor.

Remember 15 February 2003? If you’re taking the trouble to read this, then you probably went to an anti-war march that day. Didn’t turn out so well, did it? Nothing really changed. The “largest protest event in human history”, as we remember it today, was effectively ignored. That left a nasty taste. It might even have put you off the idea of protesting forever. The marching boots were thrown to the back of the cupboard and you went into a major sulk. Maybe you even wrote a song about it. Yeah, that’ll tell ‘em. You wrote the words:

or use your right to protest on the street.

Yeah, use your right –

but don’t imagine that it’s heard.

No: not whilst c***ts are still running the world.

And you thought: “Yes! Smash the system!” And then … time passed. Until you got this email:

On Sunday, Sept 21, a climate march through midtown Manhattan will kick off a week of high-profile climate events in the Big Apple. Promoted as an effort to bring unprecedented attention to climate change, the gathering comes just as international climate negotiations ramp up in a major push toward a new global accord. The People’s Climate March, being called the ‘largest climate march in history’ by organizers, will potentially draw over a hundred thousand people to walk through Manhattan and show a level of demand for action not seen since the era of Civil Rights marches and anti-Vietnam protests.

Can you be arsed? Do you risk being disappointed again? Or do you sit this one out? I mean, climate change is a bit old-hat now, isn’t it? And some people say it doesn’t even exist – people like … Nigel Lawson. (A note for non-British readers: you may be more familiar with his daughter, the TV chef Nigella Lawson. The fact that he gave his daughter a “feminized” version of his own name tells you all you need to know about him, really.)…more