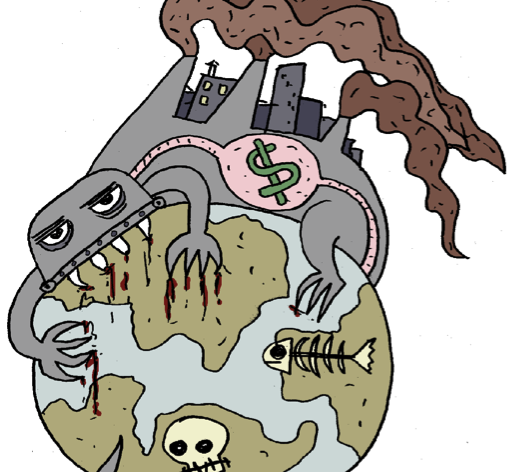 Review of Capitalism & Climate Change: The Science and Politics of Global Warming

By David Klein, illustrated and edited by Stephanie McMillan
An ebook available for download at Gumroad, a site where people can sell their work directly to their audience: https://gumroad.com/l/climatechange#. You choose your own price.

MOST BOOKS ON ecosocialism, while they may be of interest to those who already know something about socialism, especially those who already are socialists, are not particularly useful for those who want to be aware of both what climate change is and what capitalism is.

Naomi Klein’s best-selling book, This Changes Everything: Capitalism and the Climate, filled part of this gap, but as several reviewers have noted(1), by “capitalism” Naomi Klein seems to mean the variant of it that is usually called “neoliberalism,” the austerity and privatization enforced around the world by international financial institutions since the 1980s. As valuable as her book is, it is not, and does not pretend to be, a Marxist take on the crisis.

With Capitalism & Climate Change ecosocialist David Klein, with considerable help from revolutionary cartoonist Stephanie McMillan, gives us the best available primer, from a radical perspective, on what the ecological crisis is about and what is causing it. Far from challenging Naomi Klein’s similarly titled book, however, David Klein frequently relies on Naomi Klein, and in some ways, the two books complement each other.

Because they appeared within months of one another and because of their similar titles, it is natural to want to compare them. (For simplification, in what follows when I write simply “Klein,” I’ll mean David Klein).

Capitalism & Climate Change is divided into two sections, the first covering the nature of the climate crisis itself, the second capitalism’s role in creating the crisis, its inability to get us out of it, and what we can do about it.

What Science Tells Us

Klein starts Part 1,“What does climate science tell us?” with a look at the climate change denial movement, how it is funded, and how it challenges mainstream climate science. While some of this section will be familiar from Naomi Klein — who also begins with this topic — what will be new is the discussion of the lengths the deniers and their financial backers have gone to to intimidate mainstream climate scientists, up to and including anonymous threats against individual scientists.

In more ways than one, the climate change deniers, or more significantly their financial backers, mean business!

The remainder of the first section is an overview of the science behind the climate crisis. As a mathematical physicist who is director of the Climate Sciences Program at California State University at Northridge, Klein not only has a deep understanding of the science, he knows how to explain the science to a layperson.

If you want really clear explanations of how greenhouse gases cause global warming, of the carbon cycle and how it’s being disrupted, of ocean acidification, you’ll find them here. If you don’t know what chemical weathering and methane hydrates are (I didn’t), you’ll learn about them here too.

If you want to know how dire things will get under different possible global temperature rises, Klein has all the bad news for you. He ends this section on a hopeful note, however, looking at what the technical options are for a world relatively free of greenhouse gas emissions.

Again there is some overlap with Naomi Klein, for example, in the discussion of the research of Jacobson and Delucchi on the possibilities for complete conversion to renewable energy.(2)

Jacobson and Delucchi’s much-cited work examines in great detail how all the world’s energy needs could technically be met by a combination of wind, water, and solar power. Although their research has been criticized for not paying sufficient attention to the variability problem for sunlight and wind and the consequent need for extensive backup systems,(3) it does make a strong case that renewables could cover a significant proportion of the electric power, transportation, heating, and cooling required for the world’s population.

But Klein goes further than Naomi Klein here, examining agriculture, air travel, buildings, and pollution associated with renewables. He concludes that “humanity has within its grasp all of the technical means to create a thriving and sustainable future in harmony with nature.”

As others have concluded, not only Naomi Klein but also Jacobson and Delucchi, what is holding us back is not the science or engineering required. The problem is political/social/economic.

A starting point for any examination of the role of capitalism in the climate crisis (or any of the other ecological and social crises it is implicated in) must be a basic agreement on what we mean by capitalism. Sadly but not surprisingly, there is so little discussion of capitalism within mainstream North American discourse that most people are left with only a vague understanding of what we’re talking about.

For many people, “capitalism” may be something more or less eternal, associated in some fundamental way with human nature, with greed, with freedom, with achievement. Of course we’re not supposed to question capitalism, and this is why it’s off the table.

In Chapters 8, 9 and 10, Klein defines capitalism, discusses its direct effects on the environment, and explains its inevitable drive towards growth. It’s only 38 pages, but we are again rewarded by Klein’s ability to make abstract concepts understandable to those with little or no background.

In this part of the book, McMillan clearly plays a bigger role; she has plenty of experience explaining, as well as fighting, capitalism. In fact some of the cartoons in this section come from her excellent introduction to capitalism, Capitalism Must Die!(4)

“Capitalism is an economic and social system in which the means of production are privately owned. The owners, or capitalists, appropriate the surplus product created by the workers. This appropriation leads to the accumulation of more capital, the amassing of wealth, further investment, and thus the expansion of capitalism. Commodities are produced for the purpose of generating profit and promoting accumulation. Within the capitalist system, individuals pursue their self interests against competition and impersonal forces of the market.”

Some of the more useful sections of this part of the book look at consequences of capitalism that are conspicuously missing from Naomi Klein’s book, in particular the military industrial complex and population growth. Klein explains how imperialist wars are an inevitable consequence of capitalism and a major source of massive greenhouse gas emissions in addition to their more obvious destructive consequences for the countries that are invaded.

He also shows how population growth is not just a result of the improvements in medical care that came with the industrial revolution but also a veritable requirement of capitalism, given the need for reserves of consumers and cheap labor.

We’re also introduced here to Jevons’ paradox. In the mid-19th century, British economist William Stanley Jevons discovered that increases in the efficiency of coal-powered steam engines led to an increase rather than a decrease in consumption of coal, as had been expected. As efficiency increased, use of the engines expanded (and capitalism itself expanded as a consequence), requiring even more coal.

Jevons’ paradox applies equally well to a range of modern resources. For example, improvements in the efficiency of passenger aircraft, requiring less fuel per passenger mile, have made air travel less expensive, resulting in an increase in air travel and the consumption of jet fuel. Jevons’ paradox gives the lie to arguments that the technological advances that come with capitalism are part of the ecological solution; in fact they are part of the problem.

In Chapter 11, Klein takes on green capitalism. Some of this, especially the critique of some of the mainstream environmental NGOs and of carbon trading, will be familiar from Naomi Klein’s book and from the work of ecosocialist economist Richard Smith, whose work is cited.(5)

In either case, “corporations will not allow governments to curtail profits,” and when profits are threatened by a particular policy, as happened with Australia’s carbon tax, that policy is repealed.

Less familiar are the arguments against “green consumerism” and the “solutions” offered by the European social democracies of Germany and the Scandinavian countries. Green consumerism, sometimes known elsewhere as “lifestyle activism,” is based on the flawed notion that consumers are actually in charge of the market, that an enlightened public can simply choose to “buy green” or buy less.

This view fails to recognize the role of marketing and its power to affect consumers’ behavior: it’s the corporations that are in charge, not the consumers. Furthermore, increasing privatization of basic social services means that people often have no choice concerning how or whether to spend their money.

Green consumerism ends up being at best, little more than a feel-good strategy for the privileged, at worst, a misguided response to greenwashing; McMillan’s wonderful cartoons make this point very well.

Considerable attention has been focused on European countries as examples of how sustainability is compatible with capitalism. Although the trends towards locally-controlled renewable electric power in Germany and Denmark are positive, both are major consumers of biofuels, which may have devastating ecological effects in the countries where they are produced.

Capital’s Addiction and the Cure

In Chapter 12, Klein shows how the capitalist system is so addicted to fossil fuels that nothing short of a revolution can wean it away from their use.

The last two chapters offer a brief discussion of how we should go about ending capitalism and what should replace it. Again this section covers material in an accessible way for the uninitiated.

Klein admits that we are not in a period characterized by organized working class resistance to capitalism, but offers a three-step prescription for what to do under the circumstances, borrowed from Capitalism Must Die!: affirm (raise consciousness), consolidate (organize forces), struggle.

The contrast with Naomi Klein’s version of what has to happen is striking: while Blockadia-type campaigns would certainly play a part in the revolutionary strategy supported by Klein and McMillan, here we are urged to “build strategic alliances,” to be “prepared ideologically and organizationally,” to avoid the “trap of reformism,” and to eventually “halt the production of capital.”

In the final chapter, Klein is rightly cautious about laying out the details of the society we are striving for, first, because it must be up to those struggling to create this society to determine how it will work, and second, because too much is unpredictable — future revolutionaries will need to take into account the material conditions in which the new world is constructed.

However, he does leave us with a few guidelines. While many industries will have to be drastically curtailed or shut down, others, including those that are essential for the health and well-being of society, will actually need to be expanded, and a process of sustainable industrialization will need to be undertaken in the regions of the world that have borne the brunt of colonialism.

Within the climate justice movement, there is clearly the increasing recognition that the system is the problem. Ecosocialism offers a framework for understanding why this is so and (to a lesser extent) what we can do about it.

When activists I know want to learn about this perspective, Capitalism & Climate Change is what I’ll recommend they read. It’s not only a wonderful book to keep handy when you’re trying to win over your liberal friends and relatives but also an excellent resource for those who are already convinced that capitalism is the problem and revolution is the answer.

The only thing I wished for with Capitalism & Climate Change was more of it. Although Klein, aided by McMillan, does a masterful job of explaining infrared radiation, albedo, tipping points, surplus value, the overproduction crisis and creative destruction, only so much can be accomplished in 160 pages. I’m already looking forward to an expanded second edition.