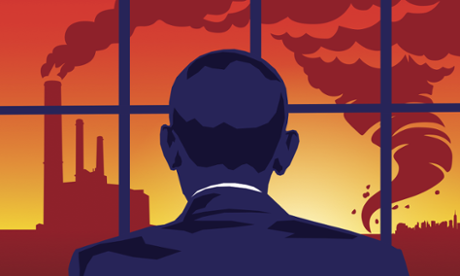 Climate change is a global emergency. Stop waiting for politicians to sound the alarm

At exactly 1pm on Sunday, the streets of New York City are going to fill with the sound of clanging pots, marching bands, church bells and whatever other kinds of noisemakers that participants of the People’s Climate March decide to bring along.

It’s being called the “climate alarm”, and the general idea is that a whole lot of people are going to make the very loud point that climate change is a true emergency for humanity, the kind of threat that should cause us to stop what we are doing and get out of harm’s way.

Is it a stunt? Well, sure, all protests are. But the mere act of expressing our collective sense of climate urgency goes beyond symbolism. What is most terrifying about the threat of climate disruption is not the unending procession of scientific reports about rapidly melting ice sheets, crop failures and rising seas. It’s the combination of trying to absorb that information while watching our so-called leaders behave as if the global emergency is no immediate concern. As if every alarm in our collective house were not going off simultaneously.

Only when we urgently acknowledge that we are facing a genuine crisis will it become possible to enact the kinds of bold policies and mobilize the economic resources we need. Only then will the world have a chance to avert catastrophic warming.

It’s not simply that our leaders aren’t leading us – at an appropriate gallop – away from fossil fuels and towards the renewable energy revolution that is both technologically and economically feasible. It’s that most of them are doubling down on the very energy sources that are most responsible for the crisis, cheering on the extractive industries as they dig up the most greenhouse gas-intensive fossil fuels on the planet: oil from the tar sands, gas from fracking, extra-dirty lignite coal.

Surrounded by such wild contradictions, most of us perform all sorts of mental tricks to try to reconcile the irreconcilable. Those scientists and environmentalists must be exaggerating, we tell ourselves. Or there must be more time before we
really need to change. Or maybe: the experts are just on the verge of figuring out a techno-fix. But does anyone really believe these fairy tales? …more