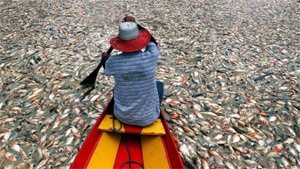 Many of the ills of the modern world — starvation, poverty, flooding, heat waves, droughts, war and disease — are likely to worsen as the world warms from man-made climate change, a leaked draft of an international scientific report forecasts. The report uses the word “exacerbate” repeatedly to describe warming’s effect on poverty, lack of water, disease and even the causes of war. The Nobel Peace Prize-winning Intergovernmental Panel on Climate Change will issue a report next March on how global warming is already affecting the way people live and what will happen in the future, including a worldwide drop in income.