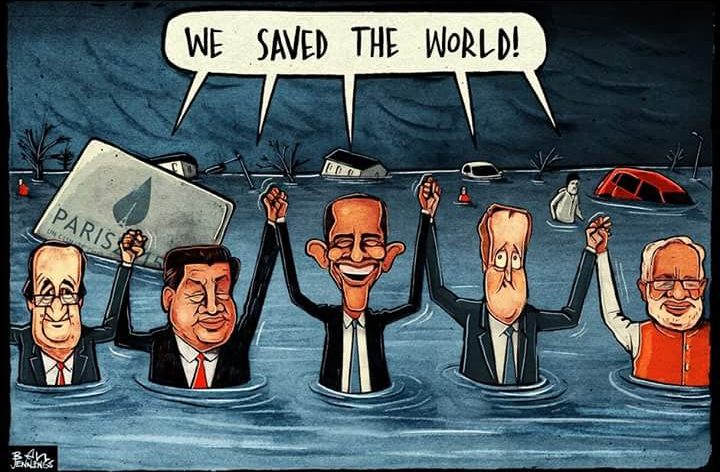 Climate Change and the Need for a New Paradigm

Despite many international meetings, dealing with every subject from biodiversity to climate change, the national political elites have found it impossible to come to meaningful agreements to deal with the environmental crisis. […] There is no avoiding imagining new and different scenarios than the status quo. Surely another world is possible.”
– Dimitrios Roussopoulos[1]

We live in times where there seems to be a crisis in just about everything – from the so called financial sector, through the contemporary mass migratory processes, to the severe corrosion of the social fabric. The ruling elites, devoted to the dominant doctrine of economism, advocate for the priority that should be given to the economy, many activists struggle for the humane treatment of migrants, while growing numbers of new age mysticists call for escapism and individual salvation.

One crisis in particular, however, is being unevenly neglected, in comparison with the above mentioned crises – the climate one. There is reason why this serious problem is being constantly postponed by those in seats of power. Unlike the financial crisis, which offers a wide playground for different economic “shamans” to put forward their theories that do not leave the imaginary of economism, the climate change and the ongoing environmental degradation questions the contemporary dogmas of constant growth and domination, demanding solutions beyond them. Surely there are international summits and agreements for tackling this problem, but their outcomes are nonbinding and often neglected in the expense of economic “prosperity”.

The climate crisis, as growing number of researches are revealing, will have us pay a dear cost for the wasteful and destructive lifestyle that capitalism promotes. It will even deepen the rest of the ongoing crises. It is not yet completely clear what exact effects and processes will be triggered by the climate change, but it is increasingly clear that the results will not be favorable to us, unless we decide to change the contemporary dominant paradigm with a new one that will allow us to develop our potential inside the planetary limits.

Many reports[2] suggest that the ongoing climate change will lead to increasing levels of poverty. Agriculture is of enormous importance for the countries of the south. It also is the main source of subsistence and sustainability for countless indigenous communities facing hostile private and state enclosure of commons. But it is also among the most sensitive to climate change due to its dependence on fragile weather conditions.

The rapid changes in these conditions will lead to food shortages. Due to climate change there already is a reduction of wheat and maize yields in tropical and temperate regions along with some rice and soybean crops. Such shortages will lead to rising food prices that will hit the poorest the hardest, while making traditional and sustainable ways of life that do not depend on imports practically impossible. Reports[3} suggest that by the year of 2030 close to 100 million people will fall under the poverty line as a result of climate change.

The changes of the planetary climate will influence also the global migratory processes[4]. With the increasing temperatures and the rising sea levels (because of the melting Antarctic ice) many people (climate refugees) will be forced to leave their homes due to flooding or droughts.

Already there are examples of such cases. The Bangladesh’s Bhola Island in 1995 has been partially covered by the rising sea levels, leaving a half-million of its inhabitants homeless. In another case the population of the island of Tuvalu has made an agreement with New Zealand so as the latter to accept its 11,600 citizens in case the country is submerged under water. Many coastal cities around the world are also vulnerable to sea level rise: Manhattan, New York; London, England; Shanghai, China; Hamburg, Germany; Bangkok, Thailand; Jakarta, Indonesia; Mumbai, India; Manila, Philippines; and Buenos Aires, Argentina.

Droughts and desert expansion are also being boosted by climate change. Countries in North Africa like Libya, Tunisia and Morocco each lose more than 1,000 square kilometers of productive land annually due to desertification. The Gobi Desert in Asia is expanding with more than 3,600 square kilometers per year, forcing farmers and peasants to migrate to the overpopulated Chinese urban areas.

Unlike the refugees fleeing warzones, the climate (environmental) ones are not protected by international laws[5]. Thus the risks they face when migrating to foreign places are immensely greater. With the expected intensification of the climate change, we will see new phenomena and humanitarian crises because of the specificity of this new type of migratory waves.

Climate change will deepen ongoing current crises. It has the potential to radically alter the face of the planet, making our future on it quite uncertain. In a sense it is a holistic crisis. Thus the climate crisis has an existential character that places us on a crossroad – to continue down the road we are currently on, or choose a different path. That’s why conventional approaches like responsible parliamentarism and green capitalism seems out of place and offer no real solution to climate change.

It is the very logic of domination that is at the root of the contemporary dogma of endless economic growth, which is currently cutting the branch we are sitting on. Murray Bookchin has profoundly demonstrated throughout his works how the domination of man over man strengthens the domination of man over nature and vice versa. To escape this vicious cycle, society has to abolish domination in all its forms, so crises like the climate one can be avoided.

This requires, however, moving beyond narrow environmentalism, limited to parliamentary lobbyism and green consumerism, because it focuses on specific by-products, rather than targeting the root of the problem that is domination. Instead a new holistic paradigm is needed, based on different logic and values, that can offer tangible imaginary significations to replace the dominant ones of today.

One such paradigm is the project of social and individual autonomy. It counters the contemporary organizational forms of hierarchy and domination with that of direct democracy. In this paradigm it is the citizens that democratically determine the laws and institutions under which they will live, rather than tiny elites. Thus it directly challenges the domination of man over man, proposing instead the collective self-instituting of all men as equal citizens.

The deliberative nature of the project of autonomy also rejects the logic of endless economic growth. Contemporary capitalist societies do not recognize any limitations. There is no question of whether something should be done or created but only when and how. The project of autonomy on the other hand entails democratic self-limitation, which overpasses narrow techno-science and places forward the political choice. It is about the citizenry democratically deciding what direction it would like its society to take. To decide to commit collective suicide or to find comfortable place within the given planetary boundaries. Self-limitation does not mean imposition of austerity or retreat to primitivism but recognizing and determining certain limits, environmental as well as political. Thus the feeling of superiority over nature, promoted by the doctrine of endless economic growth, is being replaced by symbiotic stewardship, exercised collectively by all of society.

The unfolding climate crisis is a holistic crisis and as such it requires a holistic answer. It cannot be resolved by economic “experts”, professional environmentalists or political representatives. What the successful tackling of a crisis with such magnitude requires is radical paradigm change.

The emergence of citizens capable of individual and collective conscious self-limitation beyond domination and hierarchy is what such an alternative approach should entail. This however can only be done by common people through opening spaces of participation and emancipation that can embed responsibility and autonomy in every sphere of human life.