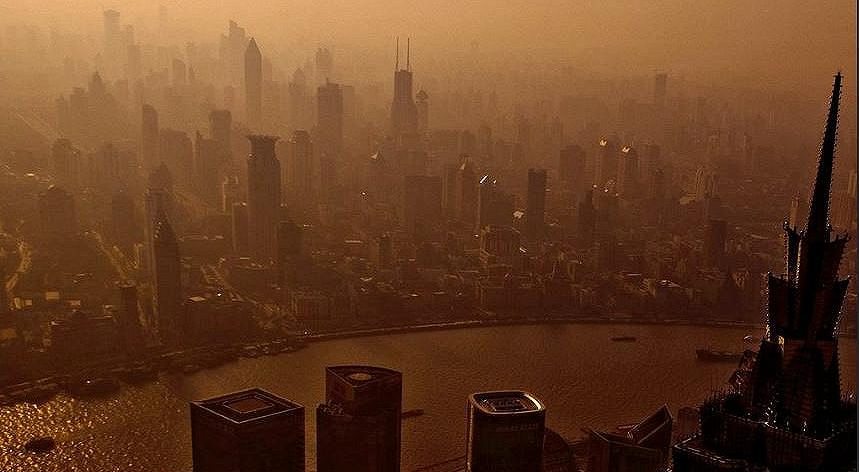 The Chinese Communist Party Is an Environmental Catastrophe

As China struggles to recover economically from the impact of the pandemic, it is set to deal a painful blow to global efforts to fight climate change. The party has often sacrificed environmental regulations as soon as GDP targets and economic growth have been threatened, thus industrial or trade decline paradoxically produces soaring pollution. But even in normal times, China’s soaring carbon dioxide (CO2) emissions are a massive part of the dire threat to all life on earth posed by climate change.

While it’s often reported that China’s CO2 levels lead the world, few appreciate the scale: how disproportionate they are compared to other large emitters; the speed of their growth; and the impossibility of reining them as long as the CCP remains in power.

Similarly, China’s cumulative emissions between 1965 and 2018 are now more than two-thirds those of the United States, and according to one assessment in Forbes, based on present trends “China will be responsible for the most atmospheric carbon dioxide in less than 20 years.” The atmosphere doesn’t care about per capita emissions—only total atmospheric CO2 concentrations.

And unlike elsewhere in the developed world, China’s numbers are trending upward, not down.

Emissions from the United States have declined from the peak in 2007, and EU nations—collectively the world’s third largest emitter—have trended downward for the past three decades. To be sure, those declines are far from sufficient to reverse global warming. They’re not even enough to meet U.S. and EU commitments to the 2015 Paris Agreement on climate change. But at least they’re declines.

By contrast, China’s carbon emissions have relentlessly grown, quadrupling between 1990 and 2017. As the world’s largest emitter, accounting for 30 percent of total global emissions against 15 percent for the United States, 9 percent for the EU-28, 7 percent for India, 5 percent for Russia, and 4 percent for Japan, China is by far the leading driver of global warming.

The country presents a climate crisis paradox. China is the largest producer of photovoltaic panels and wind turbines; it leads the world in installed capacity of both, accounting for about 30 percent of global total in 2018. It has invested more money in renewable energy and electric vehicles than the rest of the world combined. Moreover, President Xi Jinping stated his aspiration to lead the fight against global warming. In June 2017, when President Donald Trump announced that the United States would withdraw from the Paris Agreement, Xi termed it a “hard-won achievement” that “all signatories must stick to.” “Walking away from the pact would endanger future generations,” he said.

Yet that’s exactly what Xi has done. As China’s economy has rebounded from the coronavirus, industrial pollution has surged. “As the world’s largest carbon dioxide emitter and as the first major economy to reopen after the crisis, all eyes are on China,” said Lauri Myllyvirta, lead analyst Center for Research on Energy and Clean Air (CREA). “It is essential for policymakers to prioritize clean energy and reduce the country’s economic reliance on highly polluting, energy-intensive industries. But China’s leaders are doing no such thing.”

Instead of prioritizing clean energy, Xi’s government is slashing funding for wind and solar power while ramping up spending on new coal-fired power plants. That’s an inevitable result not only of the post-pandemic economic crisis but of the general slowing in the Chinese economy in the last few years. For all of China’s investments in renewables to date, solar and wind produced barely 8 percent of the country’s electric generation in 2018 (compared with 9 percent in the United States with less than a third as much investment) while coal accounted for 70 percent. In the most optimistic Chinese government scenario, coal and other fossil fuels will still provide at least two-thirds of China’s electricity until as late as 2050, by which time it will be too late to matter.

Similarly, instead of reducing reliance on highly polluting energy-intensive industries, Xi’s government is pouring investments into yet more unnecessary industries and infrastructure—more steel, aluminum, plate glass, cars, and dozens of other commodities that are already in oversupply, more unnecessary high-speed trains that run near empty, more useless subway systems built in small towns, more empty airports, more empty “ghost cities” even as the population is set to decline, more gargantuan “blingfrastructure” vanity projects to the glory of the party and local officials, such as the world’s largest radio telescope (which was finished in 2016 but remains unused because China has no qualified scientists to operate it), the world’s largest and second largest dams, the most skyscrapers, longest bridges, fastest trains, magnetic levitation trains, and so on.

China’s bureaucratic rulers are driven by three imperatives that are at least as powerful, if not more powerful, drivers of hyper-growth than profit maximization under capitalism

China’s bureaucratic rulers are driven by three imperatives that are at least as powerful, if not more powerful, drivers of hyper-growth than profit maximization under capitalism

First, they must maximize economic growth and self-sufficient industrialization. As a state-based ruling class and communist nation in a world dominated by more advanced and powerful capitalist nations, Mao and his successors understood, like the Soviet Union, that they must “catch up and overtake the United States”: build relatively self-sufficient high tech superpower economies shielded from Western takeover by barring foreign investment in key state sectors like energy, rails, telecom, etc., protecting state industries against foreign competitors, and so on. The Soviets’ failure to win the economic and arms race with the United States doomed the Soviet Communist Party. Mao’s successor as leader, Deng Xiaoping and those following him, notably Xi Jinping, have been determined to avoid that error. Environmental concerns come a far second behind the fear of economically induced collapse.

Secondly, they must maximize employment. In capitalist economies, employers have no obligation to the unemployed. If workers are laid off, it’s not the capitalists’ problem. It’s not even the government’s problem—except in severe downturns like the Great Depression when they could face unrest or even revolt.

But because the CCP was once a workers’ party, and because it derives its legitimacy from its status as the self-appointed representative of the working class, it can’t completely ignore the workers. And it’s better to have them producing something than just milling about producing nothing. That’s why the government seeks to keep them busy: by generating jobs. Five-year plans regularly include job creation targets. In November 2013, Premier Li Keqiang underscored this imperative, saying: “Employment is the biggest thing for well-being. The government must not slacken on this for one moment. … For us, stable growth is mainly for the sake of maintaining employment.” Yet keeping China’s hundreds of millions of workers working often means producing superfluous steel, needless infrastructure, ghost cities, etc. Maximizing employment is a major driver of overproduction, over-construction, so-called blind growth and blind investment, and profligate waste of energy and resources across the economy.

And finally, they must maximize consumption and consumerism. In the wake of the collapse of the Soviet Communist Party in 1991 and the Chinese Communists’ own near-death experience with the Tiananmen Square protests in 1989, the party leadership resolved to create a mass consumer economy and raise incomes, in order to focus people’s attention on consumption and take their minds off politics. That’s why, ever since the early 1990s, successive Five-Year Plans have prioritized new consumer industries and the government has promoted one consumer craze after another: cars; condos; shopping malls; tourism; golf courses; theme parks; bike sharing; cruise boats; food delivery; online shopping, and more. To this end, the government has also partnered with and backed private capitalists like Jack Ma’s e-commerce giant Alibaba to promote shopping, the movie industry, video gaming, theme parks, tourism, social media, and more.

State banks went into the mortgage business to promote housing speculation, then created a consumer credit industry to keep consumers focused on making money to spend on new trinkets. Housing privatization promoted the growth of furniture, home decoration, and renovation markets, spurring yet more growth—and all of this, the government constantly reminds its citizens, is thanks to the glorious Communist Party. No doubt after centuries of privation and decades of Maoist austerity, China’s masses were overdue for some creature comforts. But the promotion of mindless consumerism for the sake of consumerism on the model of Western capitalism is contributing mightily to China’s and the world’s waste and pollution crises. Less enviable among China’s many firsts is this headline, from the China Daily: “China No. 1 dumper of plastic into ocean.”

The problem with all of this is that to maximize economic growth, employment, and consumerism, China’s leaders have no choice but to let the polluters pollute. There’s just no way around that. This tendency is further exacerbated in China’s case because as nationalists concerned with self-reliance, the government strives to rely on China’s own energy resources: mostly coal, because it’s available nearly everywhere and 24/7. That’s why, rather than rely mainly on intermittent renewables or the world market for oil and natural gas (though it imports those, too), Xi’s government is firing up more coal-fired power plants. In short, in their race to overtake the United States, China’s leaders find they must prioritize hyper-growth over the environment, even if this ends in global climate collapse and eco-suicide.

True, Western capitalist economies led by the United States are racing China to the brink of climate collapse, and likewise cannot prioritize people and planet over profit, as I’ve argued elsewhere. But what’s uniquely dangerous about the Chinese case is that its emissions are so huge, nearly a third of total global emissions, and growing so fast that scientists tell us they could eventually doom the climate on their own regardless of what the rest of the world does.

And while citizens in the West (still) have the freedom to mobilize and fight governments and companies whose emissions threaten our survival, and their collective actions have in fact restrained—if not enough—the growth of emissions in the United States and Europe, by contrast, the Communist Party runs a totalitarian police state that ruthlessly suppresses all resistance to the party agenda.

In the comparatively liberal atmosphere of the 1990s and 2000s, there was some limited space for NGOs and discussion of non-party suggestions.

But Xi has doubled down both on repressing any hint of opposition while simultaneously accelerating and broadening his superpower ambitions, regardless of their environmental consequences. Given the Great Firewall, most Chinese people today have no idea that their country leads the world in CO2 emissions, and even if they did know, they have no legal means to organize and resist the vainglorious but eco-suicidal ambitions of their rulers.

In October 2019, climate scientists published new research showing that on present trends, global warming will “all but erase” Shanghai, Shenzhen, and most of the world’s great coastal cities by 2050—barely thirty years from now. There won’t be any “great rejuvenation” and glory for the Communist Party when Shanghai and Shenzhen are underwater, when China’s glaciers melt and its rivers dry up, and when soaring temperatures and drought collapse farming across the North China Plain. Even those in the leadership who do care about the country’s outsized emissions can’t suppress them because that would require pulling the emergency brake: shutting down and/or retrenching China’s overproducing, overpolluting industries—and that would doom Xi’s “China Dream” of global tech supremacy and Communist Party glory, if not the party itself.

Parts of this article were adapted from China’s Engine of Environmental Collapse from Pluto Press (2020).

Richard Smith is an economic historian and commentator on China, capitalism, and the environment as well as a founding member of System Change Not Climate Change.