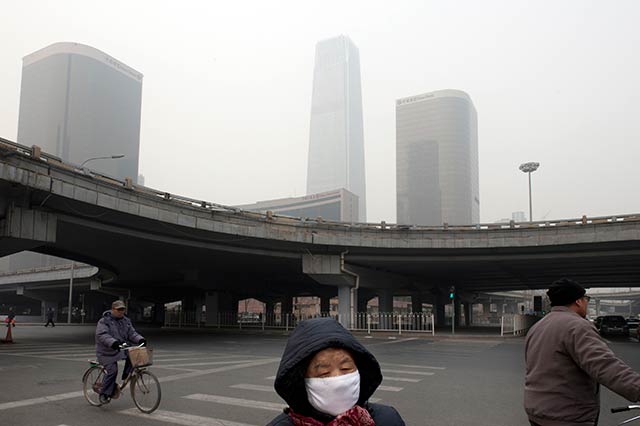 This article seeks to explain why China’s environmental crisis is so horrific, so much worse than “normal” capitalism most everywhere else, and why the government is incapable of suppressing pollution even from its own industries. I begin with an overview of the current state of China’s environment: its polluted air, waters, farmland and the proximate causes, including overproduction, overdevelopment, profligate resource consumption, uncontrolled dumping and venting of pollutants. I then discuss the political-economic drivers and enablers of this destruction, the dynamics and contradictions of China’s hybrid economy, noting how market reforms have compounded the irrationalities of the old bureaucratic collectivist system with the irrationalities of capitalism resulting in a diabolically ruinous “miracle” economy. I conclude with a précis of the emergency steps the country will have to take to take to brake the drive to socio-ecological collapse, with dire implications for us all.

The first time Li Gengxuan saw the dump trucks from the nearby factory pull into his village, he could not believe his eyes. Stopping between the cornfields and the primary school playground, the workers dumped buckets of bubbling white liquid onto the ground. Then they turned around and drove right back through the gates of their factory compound without a word.

In March 2008, Li and other farmers in Gaolong, a village in the central plains of Henan Province near the Yellow River, told a Washington Post reporter that workers from the nearby Luoyang Zhonggui High-Technology Company had been dumping this industrial waste in fields around their village every day for nine months. The liquid, silicon tetrachloride, was the byproduct of polysilicon production and it is a highly toxic substance. When exposed to humid air, silicon tetrachloride turns into acids and poisonous hydrogen chloride gas, which can make people dizzy and cause breathing difficulties.

Ren Bingyan, a professor of material sciences at Hebei Industrial University, contacted by the Post, told the paper that “the land where you dump or bury it will be infertile. No grass or trees will grow in its place … It is … poisonous, it is polluting. Human beings can never touch it.”

When the dumping began, crops wilted from the white dust, which sometimes rose in clouds several feet off the ground and spread over the fields as the liquid dried. Village farmers began to faint and became ill. And at night, villagers said “the factory’s chimneys released a loud whoosh of acrid air that stung their eyes and made it hard to breath.”

“It’s poison air. Sometimes it gets so bad you can’t sit outside. You have to close all the doors and windows,” said Qiao Shi Peng, 28, a truck driver who worried about the health of his 1-year-old.

Reckless dumping of industrial waste is everywhere in China. But what caught the attention of The Washington Post was that the Luoyang Zhonggui High-Technology Company was a “green energy” company producing polysilicon destined for solar energy panels sold around the world. Indeed, it was a major supplier to Suntech Power Holdings, then the world’s leading producer of solar panels, and Suntech’s founder, Shi Zhengrong, topped the Hunrun list of the richest people in China in 2008.

Silicon tetrachloride is an unavoidable byproduct of polysilicon production. But reckless pollution of farm villages is not unavoidable. Today, China is the only country in the world where such criminal behavior and cynical disregard for the health and lives of farmers and workers has become standard practice on a national scale by governments at every level, even as the government’s own environmental agencies decry such behavior and struggle, mostly in vain, to stop it. As one Chinese researcher told the Post, “If this happened in the United States, you’d be arrested.” But in China environmental regulations are regularly flouted by state-owned and private industries with the connivance of government officials at all levels while protesting farmers, workers and environmental activists are arrested, jailed, beaten or worse, and their lawyers with them.

Polysilicon production produces about four tons of silicon tetrachloride liquid waste for every ton of polysilicon produced. In Germany, where Siemens produces solar panels, pollution recovery technology is installed to process the silicon tetrachloride waste and render it harmless. But such environmental protection technology is expensive. In 2008, the cost to produce polysilicon safely was about $84,500 a ton in Germany and would not have cost much less in China. Chinese companies have been producing it for $21,000 to $56,000 a ton, saving millions of dollars a month, by just dumping the toxic waste in rural areas on helpless village communities.

Gaolong village is a mirror to China. It illustrates how the marriage of capitalism and Stalinist bureaucratic collectivism has created a diabolically destructive hybrid economic system, a rogue economy that is ravaging China’s environment, ruining the health of Chinese people, rendering more and more of the country unlivable, driving the country to ecological collapse and threatening to bring the whole planet down with it.

For more than three decades, China’s “miracle” economy has been the envy of the world or at least the envy of capitalist economists for whom wealth creation is the highest purpose of human life. Since 1979, China’s GDP has grown by an average of just under 10 percent per year. Never, the World Bank tells us, has a nation industrialized and modernized so quickly or lifted so many millions out of poverty in such a short time. From a backward, stagnant, largely agrarian socialism-in-poverty, Deng Xiaoping brought in foreign investors, introduced market incentives, set up export bases, turned China into the light-industrial workshop of the world and renovated China’s huge state-owned enterprises (SOEs).

Three and a half decades of surging economic growth lifted China from the world’s 10th largest economy in 1979 to No. 1 by 2014. What’s more, after decades of export-based growth, China’s 12th Five-Year Plan 2011-2015 sought to refocus the economy on internal market demand to realize Xi Jinping’s “Chinese Dream” of national rejuvenation and turning China into a mass consumer society on the model of the United States. As China sailed right through the global near-collapse of 2008 to 2009, hardly missing a beat, while Western capitalist economies have struggled to keep from falling back into recession, even the Thatcherite Economist magazine had to concede that China’s state capitalism may be in certain respects superior to capitalist democracies and is perhaps even the wave of the future.

But China’s rise has come at a horrific social and environmental cost. It’s difficult to grasp the demonic violence and wanton recklessness of China’s profit-driven assault on nature and on the Chinese themselves. Ten years ago, in an interview with Der Spiegel magazine in March 2005, Pan Yue, China’s eloquent, young vice-minister of China’s State Environmental Protection Agency (SEPA) told the magazine, “the Chinese miracle will end soon because the environment can no longer keep pace.” Pan Yue added:

We are using too many raw materials to sustain [our] growth … Our raw materials are scarce, we don’t have enough land, and our population is constantly growing. Currently there [are] 1.3 billion people living in China, that’s twice as many as 50 years ago. In 2020 there will be 1.5 billion … but desert areas are expanding at the same time; habitable and usable land has been halved over the past 50 years … Acid rain is falling on one third of Chinese territory, half of the water in our seven largest rivers is completely useless, while one fourth of our citizens do not have access to clean drinking water. One third of the urban population is breathing polluted air, and less than 20 percent of the trash in cities is treated and processed in an environmentally sustainable manner … Because air and water are polluted, we are losing between 8 and 15 percent of our gross domestic product. And that doesn’t include the costs for health … In Beijing alone, 70 to 80 percent of all deadly cancer cases are related to the environment.

And criticizing Western economists who reassure us that more growth is the key to repairing the environmental damage done from growth, Pan said:

And there is yet another mistake … It’s the assumption that economic growth will give us the financial resources to cope with the crises surrounding the environment, raw materials, and population growth. [But] there won’t be enough money, and we are simply running out of time. Developed countries with a per capita gross national product of $8,000 to $10,000 can afford that, but we cannot. Before we reach $4,000 per person, different crises in all shapes and forms will hit us. Economically we won’t be strong enough to overcome them.

Pan Yue’s searing honesty got him sidelined but if anything, he understated the speed, ferocity and scale of China’s ecological destruction, a destruction that extends far beyond China itself.