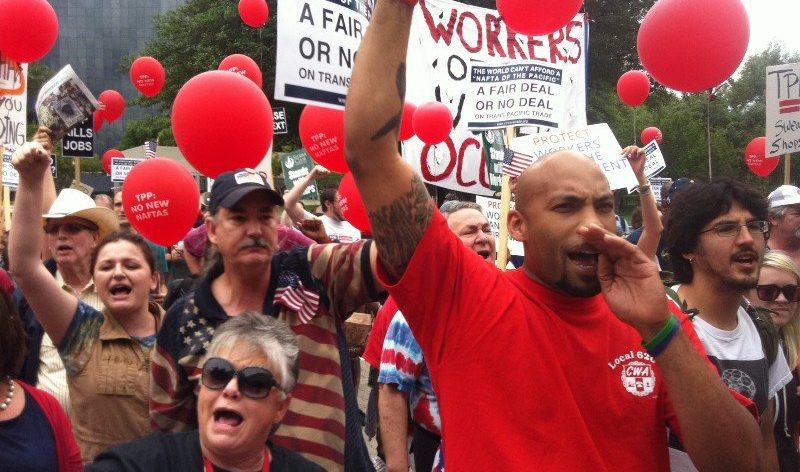 The election of Donald Trump reflects the unraveling of the centre-left across the West, and with it a fragile consensus on climate change. For two decades parties of the centre-left have created narratives about climate change that they do not really believe. They have done this to try and convince their fragile coalition of supporters and to try to bring they’re political opponents on the right into the fold. These attempts have failed.

The centre-left long ago abandoned ‘typical’ green messaging in the way it talks about climate change. You don’t hear Obama, Clinton or Justin Trudeau talking about polar bears, sinking Pacific Islands or even climate change as a human rights issue. The go-to arguments of the centre-left (and to some extent centre-right politicians like Germany’s Angela Merkel) are these:

How did the centre-left end up making these arguments? And why does no one believe them?

From right to left

In the early part of the 20th century the environment was the concern of the right. British imperialists created wildlife reserves in the colonies; European fascists became champions of ecology; Republican presidents like Theodore Roosevelt created national parks. The left was wary of environmentalism, seeing it as the preserve of wealthy. Environmentalism was a threat to industries that employed the people the left represented; a pursuit of the detached aristocracy more concerned with protecting rare butterflies than with the concerns of ordinary people.

In the late 70s and 80s the right began to paint environmentalism (and its newfound concern with climate change) as the exclusive preserve of the left. They branded it as socialism by the backdoor—a charade created by the left to install a new wave of communism. A strange situation indeed, given that the organised left typically had little time for an environmentalism that is saw as a the concern of the privileged right. Labelling it as creeping communism was also a bold move. At the time the soviet block showed little interest in the environment and aggressively pursued hugely environmentally destructive industrial projects. In spite of making almost no logical sense, this hit job worked well.

But this transfer was only possible because of another tectonic shift in politics. Just as the right was looking to offload environmentalism, centre-left parties across the West were looking to offload socialism while hitching their wagons to neoliberalism—the doctrine of privatisation, globalisation and the rule of the markets in all areas of life.

The new economic globalism started by the right and continued by the centre-left had another consequence. The removal of trade tariffs meant that goods could be made more cheaply in developing countries. Jobs moved from the industrial heartlands of the West to anywhere labour was cheap and regulation was loose. By the end of Thatcher and Reagan’s administrations the de-industrialisation of the UK and US was in full swing. Most heavy manufacturing was moving overseas.

The right now had the perfect weapon against the centre-left parties. ‘Look at these detached elites,’ they could say. ‘They’ve abandoned working people. They are more concerned with the preservation of polar bears than with the concerns of ordinary people. Their environmental regulations have forced your jobs overseas.’

Of course the right had done the most to ensure the decline of industry and the jobs that went with it. And the offshoring of work had more to do with trade agreements that environmental regulation. But the right had dispensed with their once cherished environmentalism and turned it into the perfect weapon against the centre-left.

For this reason centre-left parties now frame their concern for climate change around what they imagine are the concerns of others: framings around job creation are supposedly for the people of post-industrial areas they abandoned decades ago; framings around climate change and national security are not believed by the nationalists they are pitched at—and these people never voted for centre-left parties anyway; framings around economic growth are for the capitalists they welcomed into their fold in the 80s and 90s.

So there it is. The centre-left adopted an environmentalism it did not create. To persuade the hotchpotch of interests the centre-left depended upon, it created a set of narratives that no one found convincing.

Despite the victory of the explicitly anti-environmentalist Trump, centre-left parties across the West will probably just double down on their existing climate change messages. They will wrongly believe they can win over the nationalists and racists with their climate change = terrorism arguments. But it’s clear from the exit polling that this demographic never voted Democrat anyway. They will hope business interests will prefer their narrative about green growth over Trump’s narrative of unfettered, regulation-free capitalism—but why on earth would they? They will believe that traditional centre-left voters will be inspired by arguments about job creation and industrial re-growth.

The only of these arguments that is true is the last one. And it’s only half true. The idea of industrial growth and secure jobs is a compelling one. The idea of that growth being in renewables is even more compelling. But people won’t believe these messages when they come from centre-left politicians who have never shown the slightest interest in the concerns of the US rust-belt or the English North East or the Welsh Valleys. Hillary Clinton or the UK’s various Tony Blair clones will never successfully deliver these messages. But a new wave (or perhaps an older wave) of politicians might.

This goes someway to explaining the rise of Jeremy Corbyn in the UK and Bernie Sanders in the US. Politicians that never hitched their wagons to the neoliberal agenda. People who have always been opposed to the rule of global markets; people who continued representing the concerns of post-industrial regions while their parties abandoned them. People who might be believed if they said they wanted to create millions of jobs in renewable energy.