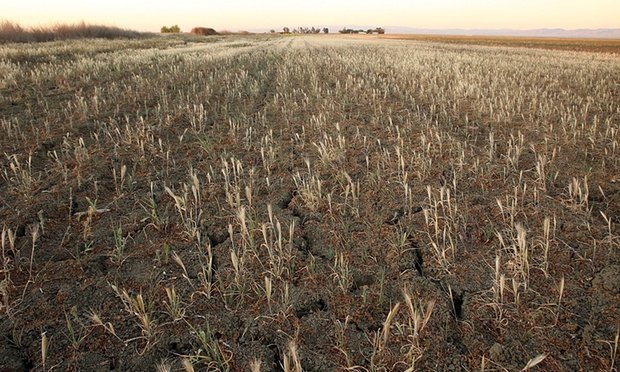 The Central Valley is sinking: drought forces famers to ponder the abyss

On a day when the skies were ashen from the smoke of distant wildfires, Chase Hurley kept his eyes trained on the slower-moving disaster at ground level: collapsing levees, buckling irrigation canals, water rising up over bridges and sloshing over roads.

This is the hidden disaster of California’s drought. So much water has been pumped out of the ground that vast areas of the Central Valley are sinking, destroying millions of dollars in infrastructure in the gradual collapse.

Four years of drought – and the last two years of record-smashing heat – have put water in extremely short supply.

Such climate-charged scenarios form the backdrop to the United Nations negotiations starting in Paris on 30 November, which are seeking to agree on collective action to reduce greenhouse gas emissions.

But the real-time evidence of climate change and the other effects of human interference in natural systems are already changing the contours of California’s landscape.

The strongest El Niño in 18 years is expected to bring some drought improvement to the Central Valley this winter, but the weather system won’t end it, according to the National Oceanic and Atmospheric Administration.

The Central Valley is the world’s largest patch of class one soil, considered to be the best for crops, and produces about 40% of the country’s fruits, nuts and vegetables.

In some parts of the valley, however, the land is sinking at a rate of 2in (5cm) a month. About 1,200 square miles, roughly bounded by interstate 5 and state route 99, is collapsing into what scientists describe as a “cone of depression”.

“The land around here is sinking, and as it is sinking, the bridge is going with it,” said Hurley, manager of the San Luis Obispo water company, on a tour of sinking infrastructure near the town of Firebaugh.

The water company, which is owned by area farmers, had recently rebuilt the levee, he said. But “because the water is hitting the bridge, they are going to have to reconstruct the bridge”. Wellheads were being destroyed, because they could not maintain pressure. Dams were sinking. “I am having a hard time pushing water through my canal,” Hurley said.

The sinking is a consequence of farmers’ desperate efforts to stay in business after California began cutting off their access to rivers and reservoirs because of the drought.

The farmers began a literal race to the bottom, going underground, drilling new and deeper wells, and pumping so much water from the layers of sediment, sand and clay that it is causing the ground to collapse.

The sinking is worse in this part of the valley because it is rich in clay. Pumping pulls the water out of the clay pores, causing the clay layer to collapse. “The issue is the amount of deepwater pumping below the clay. That is what is causing the subsidence,” Hurley said. “The land is sinking as they extract the water below the clay; there is a pressure differential. It is pulling the water out of the clay layer, and when it does, the clay collapses. And as it collapses, it brings everything with it.”