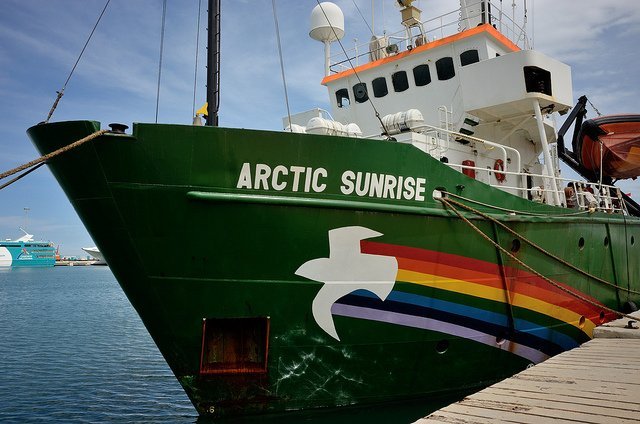 “Russia’s investigative committee this morning informed Greenpeace International that it has annulled the arrest of the Arctic Sunrise, which has remained in custody in Murmansk,” Greenpeace said in a statement.

Greenpeace reaffirmed its belief that the arrest of the ship was illegal under international law.

“Millions of people spoke out against the illegal imprisonment of the Arctic 30, and today the final member of the group is free to come home. Our ship was arrested during an entirely peaceful protest against Arctic drilling in international waters. There was absolutely no justification either for boarding the ship or keeping her for eight months.

“This whole affair was a brazen attempt to intimidate those who believe that drilling for oil in the melting Arctic is reckless and unsafe. After months without proper maintenance our ship will need careful repairs, but like our campaign to protect the Arctic she will emerge better, fitter and stronger from this.”

Russian authorities told Greenpeace’s lawyers that investigations continued “in order to examine equipment found on board the ship”.

Originally facing a charge of piracy, they were later targeted with less severe ‘hooliganism’ accusations.

The 30, including four Russians, were detained for two months before being bailed and then receiving amnesty.

The Arctic Sunrise was towed to the northern Russian port of Murmansk.

“Our main priority now is to get the ship checked by independent surveyors to assess the level of damage since it was seized by Russian agents on September 19th. We will also be asking the Russian authorities to continue guarding the vessel until our crew arrives to take custody of it”, said Daniel Simons, Greenpeace International Legal Counsel.

In the eight months since the action took place Greenpeace has continued to campaign against Arctic oil drilling across the world, most recently in Norway last week where activists occupied a Statoil contracted oil rig in the Barents sea for over 48 hours. Meanwhile Dutch activists blocked a second Gazprom rig, the GSP Saturn, as it left the Dutch port of IJmuiden to drill in the Russian Arctic.

Kumi Naidoo, who himself protested at the Prirazlomnaya rig in 2012 continued:

“We will continue to oppose any oil company that attempts to drill in the Arctic ocean. As the world warms and the ice melts this is fast becoming an era defining battle, and we are determined to win it.”

But said Naidoo: “Today the final member of the group is free to come home.”

A new documentary from Journeyman Pictures, Black Ice, on the Arctic 30: