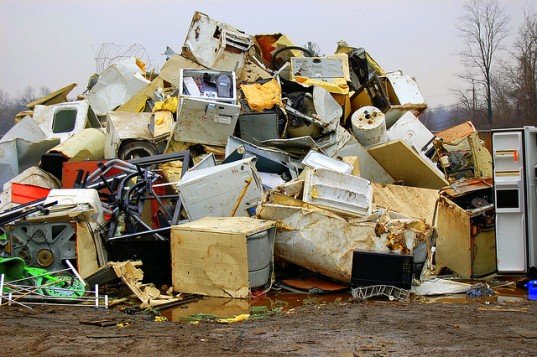 What would a truly just, equal and ecologically sustainable future look like? Why would it require a change in our economic system, namely the end of capitalism? Fred Magdoff and Chris Williams answer these questions in Creating an Ecological Society: Toward a Revolutionary Transformation. Suffused with radical hope, this book can be yours with a donation to Truthout!

In this excerpt, Magdoff and Williams show the immense levels of waste created by capitalism today, including by the prison-industrial complex, food system and housing in the United States — not to mention the horrendous expensive and wasteful US military.

More production means more waste: more waste means more production. Waste is a sign of capitalism’s success. When people throw away a product after using it for a short period of time, in the spirit of planned obsolescence, they will buy a new one, contributing to growth and corporate profits.

As early as the 1920s Stuart Chase identified four systematic sources of waste under capitalism: (1) the labor power used to produce “vicious or useless goods and services”; (2) labor power wasted due to unemployment; (3) the unplanned nature of production and distribution of goods leading to inefficiencies and overproduction; and (4) the senseless waste and overuse of natural resources. Addressing the term coined by nineteenth-century writer and social reformer John Ruskin, Chase wrote that what capitalism produces is not wealth, but “illth.”

Illth abounds under capitalism. In Monopoly Capital: An Essay on the American Economic and Social Order, first published in 1966, Paul Baran and Paul Sweezy included an appendix by Joseph D. Phillips titled “Estimating the Economic Surplus.” Phillips demonstrated that the economic surplus — aspects of the economy that served no socially useful purpose and would therefore be considered waste in a more rationally organized society — averaged over half of the gross national product of the United States.

Illth comes in many forms. One is conspicuous consumption by the very rich — the luxury cars, yachts, private jets, huge houses, and other forms of ostentatious living. World Bank economists calculate that the wealthiest 10 percent of the world’s population uses close to 60 percent of all the world’s resources. If this richest 10 percent reduced their consumption to the average consumption of the rest of humanity, total global resource use would be cut in half. The New York Times estimated the amount spent on luxury items in the United States in 2012 — leaving out the luxury homes — at $302 billion. A 2015 report by the British charity Oxfam found that the wealthiest 10 percent were responsible for half of all emissions of greenhouse gases, whereas the poorest half of the world’s people were responsible for about 10 percent.

The prison-industrial complex, expanded primarily due to the racist “war on drugs,” and developed in large part to control communities of color, is most certainly illth. Essentially all the enormous economic financial sector does is find ways to make money with money, providing little of social value. The same can be said for marketing, advertising, and packaging for brand promotion and the proliferation of products designed with built-in obsolescence or to stimulate new wants.

The system of giant multinational supermarket companies controlling food supply and sales produces vast quantities of wasted food. It is estimated that between 30 and 50 percent of the food grown in the United States goes to waste. Food is left in the field if it doesn’t meet certain cosmetic standards of large buyers, even if it is perfectly good quality. Supermarkets routinely overstock their produce shelves in deliberate displays of abundance, knowing that a portion will spoil and be thrown away. Globally, about one-third of food is wasted, amounting to about 1.8 billion tons and worth approximately $1 trillion. All of this wasted food means wasted water, labor power, energy, and all the other resources that went into making it — petrochemicals for pesticide and fertilizer production, energy to run agricultural machinery and transportation to markets, and so forth.

The vast majority of food waste is due to an agricultural and food system set up to generate profit. However, a lack of storage infrastructure in the Global South is a major cause of spoilage and pest infestation before the food reaches markets.

The spread of online shopping was once touted as environmentally more benign than trips to the retail shops, but instead it is adding a new dimension to the waste of resources. According to the Wall Street Journal, “Giant warehouses are springing up across the country as surging online sales send retailers scrambling to find space to house products destined for delivery to customers’ homes.” The huge increase in e-commerce deliveries means corresponding increases in cardboard boxes, the most rapidly growing part of the 35 million tons of containerboard produced in 2015. Transport of the packages from warehouses creates further environmental damage. Ardeshi Faghri, a professor of civil engineering at the University of Delaware, said that a 20 percent increase of various vehicle emissions that was measured was at least partially caused by more deliveries of goods: “Online shopping has not helped the environment…. It has made it worse.”

U.S. per capita energy consumption is twice that of the most industrialized European countries despite a similar standard of living. The United States consumes 25 percent of world energy, but it does so almost 50 percent less efficiently than Europe. Clearly, there is ample room for improvement, especially because Europe is not particularly energy-efficient in the first place.

Waste is also a routine by-product of capitalists’ tendency to overbuild capacity in good times, assuming that growth will continue at its same trajectory. The company that overbuilds capacity eventually comes up against a much lower cost producer or mistaken market possibilities or a recession, leading to abandoned factories and stores that are then repurposed, torn down, or just left to decay. Abandoned or torn-down facilities such as steel mills, clothing factories, movie theaters, and malls represent a huge waste of resources. In many cases it makes no social or environmental sense to abandon or tear down such properties, but it becomes a reasonable thing to do in an economy in which decisions are made on whether more profits can be made by abandoning a facility than by repurposing the building or constructing a new one.

The same occurs with homes. Tear-downs are common in middle class and wealthy neighborhoods. A Wall Street Journal article titled “Multimillion-Dollar Homes Face the Wrecking Ball” describes a fourteen-bedroom house being purchased for $11.5 million and the empty lot marketed three years later, after the house was torn down, for $14 million. According to the article, “It’s almost becoming routine: eight-figure listings treated as tear-downs — and marketed as such. Buyers see value in the land, especially in exclusive neighborhoods or on the waterfront. There, they can build brand-new homes with modern design and cutting-edge technology.” In other areas, whole working-class neighborhoods have been torn down and residents dispersed in order to build highways through cities or advance urban “renewal” to gentrify or commercialize a district.

During the rapid growth in international trade in the early 2010s, large numbers of ships were constructed to haul raw materials as well as parts and finished goods. But with the decline in global economic growth in the middle of the decade, scrapping the ships became common. “About 1,000 ships that have the combined capacity to haul 52 million metric tons of cargo will be dragged onto beaches, cut into pieces and sold for scrap metal this year [2016]. That is second only to the record amount of capacity of 61 million so-called dead-weight tons that were scrapped and recycled in 2012.” While at least the steel is being recycled, the buildup of shipping overcapacity that ends with ships on the scrap heap when shipping prices plunge during a slowdown is a colossal waste of material and human resources.

How can a genuinely democratic, equitable and sustainable society be created?

In addition to all the other sources of waste we’ve discussed, the military needs to be acknowledged as a sinkhole into which large amounts of resources disappear. One example is the Obama administration’s $1 trillion plan to “modernize” U.S. nuclear weapons and the introduction of the most expensive weapons project in history, the F-35 fighter jet. This plane became notorious for escalating costs and failed tests. “With an American fleet of more than 2,400 planes planned by the late 2030s — projected total costs will exceed $1 trillion. One billion dollars will be needed just to pay for the highly advanced pilot helmets, running to $400,000 apiece.” Imagine what might be able to be done to repair U.S. public schools if $2 trillion (the cost of the F-35 and nuclear weapon “modernization”) was used to create healthy and pleasant places for children to learn. The $178 million cost of just one of the planes is enough to provide 3,358 years of college money.

And though the human costs of the U.S.-led wars in Iraq and Afghanistan in the early decades of the twenty-first century are horrendous, the financial costs run into the trillions of dollars — money that could have done much good if spent on social programs in the United States and abroad.

The military also wastes incredible quantities of fuel. It is exempt from all international climate agreements and local environmental regulations at its hundreds of bases worldwide, allowing the U.S. military to be the single largest institutional user of fossil fuels and by far the world’s biggest polluter. A full 80 percent of the energy consumption of the federal government is for the operation of the Department of Defense. According to the CIA’s World Factbook, in 2006 only thirty-five countries used more oil per day than the Pentagon. The U.S. war in Iraq emitted more CO2 each year than 60 percent of all countries on the planet combined. Even within the military, a voluminous budget of almost $1 trillion and guaranteed cost-plus contracts facilitate gargantuan waste, such as the $385 billion for military contractors for U.S. overseas bases over a twelve-year period.

Copyright (2017) of Fred Magdoff and Chris Williams. Not to be reposted without permission of the publisher, Monthly Review Press.

Fred Magdoff is Professor Emeritus of Plant and Soil Science at the University of Vermont. Among his recent books are Agriculture and Food in Crisis (edited with Brian Tokar) and What Every Environmentalist Needs to Know About Capitalism (with John Bellamy Foster).

Educator, author, journalist and activist Chris Williams has been published in numerous US and international media outlets, and his work has been translated into several languages. He is the author of Ecology and Socialism: Solutions to Capitalist Ecological Crisis (Haymarket Books) and co-author of Creating an Ecological Society: Toward a Revolutionary Transformation (Monthly Review Press).