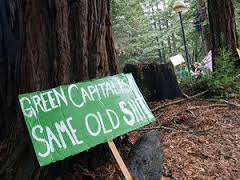 Capitalism vs. Ecology: We need to change everything! resistance and alternatives

It is no longer plausible to propose incremental solutions to the ecological crises of our time. The numbers are clear: to avoid a trillion metric tons of cumulative carbon emissions by 2039, and an increase in global average temperatures of 2°C, it is necessary to stabilize immediately Greenhouse Gas emissions. The ecological scars of desertification, coastline loss, species extinction, destruction of habitat, and much else is evident for all to see.

The main culprit of runaway climate change and environmental degradation, as Naomi Klein points out in her new book, is the economic system itself: capitalism. This is a class system that requires endless growth and is incompatible with sustainability and meaningful climate action. Market solutions from the last decades of neoliberalism have miserably failed. The tactics of even “Big Green” environmental groups have too often pursued immediate reforms that fail to address the real sources of the crisis in the unequal relations at work, the need for endless consumption, and the hollowness of democracy today.

But what might serve as an alternative political program for an ecological transition? Where might new radical political movements emerge to carry forward such an ecological revolution? Is “Blockadia” enough? Or is there even more needed to, as Klein suggests, “build the world that will keep us all safe”?

Moderated by Lana Goldberg. Presentations by:

The forum was sponsored by: Centre for Social Justice and Socialist Project.