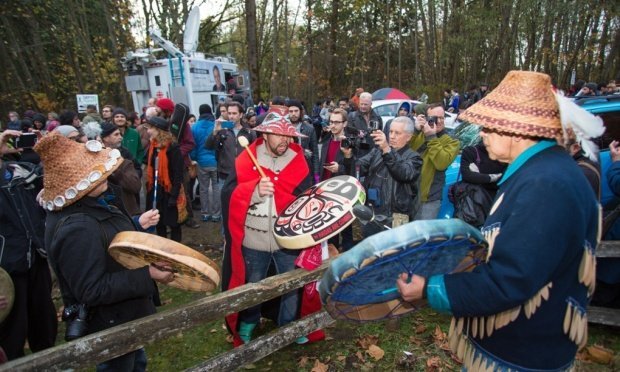 The Harper government is trying to win support for its pipelines and resource agenda by pushing First Nations to sideline their aboriginal rights in exchange for business opportunities, documents reveal.

The news that Canada’s Ministry of Aboriginal Affairs is working to this end by collaborating with the Assembly of First Nations (AFN) is sparking strong criticism from grassroots Indigenous people.

Funded by the federal government, the Working Group on Natural Resource Development held private meetings in Toronto and Edmonton in the fall of 2014 that were attended by several invited Chiefs and representatives from Enbridge, Syncrude and other oil corporations, as well as mining companies and business lobby groups.

In one email, a government official writes that it was “widely agreed” at the meetings that “unlocking resource development projects is squarely in the national interest,” a suggestion that will be contested by many First Nations involved in mounting protests against pipelines and other industrial projects around the country.

It was “noted repeatedly” that “we can no longer afford the investment uncertainty created by issues around Aboriginal participation,” the official writes. The transcripts of the meetings were redacted in the documents, which were obtained through access-to-information.

The documents cite $600 billion of investment that the Harper government hopes will flow in the next decade into mining, forestry, gas and oil projects. As of March 2013, 94 of 105 projects under federal review were “located on reserve, within an historic treaty area, or in a settled or unsettled claims area”.

In response to these pressures, considerations for the groups’ mandate include “reducing uncertainty and investment risk” and “advancing business-to-business partnerships rather than through a rights-based agenda.”

The federal government has been criticized for trying to minimize or ignore the land rights of First Nations, including refusing to implement the United Nations Declaration on the Rights of Indigenous Peoples. It has been doing extensive risk evaluations, increasingly worried that the growing power of indigenous rights could hamper its aggressive resource extraction plans.