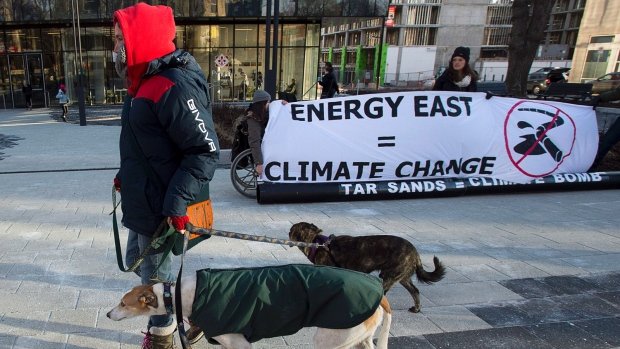 Canada’s Indigenous Bands Rise Up Against a Tar Sands Pipeline

TransCanada, the company behind the now-defunct Keystone XL, is proposing another pipeline that would ship Alberta tar sands oil to Canada’s Atlantic coast. But fierce opposition from First Nation communities could derail this controversial project.

Sitting in his office on the outskirts of Montreal, Serge Otis Simon, council chief of the Kanastake — a band of Mohawks — is clear about what might happen if the proposed Energy East Pipeline is routed through the band’s land, in spite of their opposition. “The Warrior Society are men whose duty is given by creation to protect the land, people, and community,” he told me, describing a group of Mohawks who go by that name. “I can’t think of a more honorable way to be killed than standing in the way of that pipeline.”

The rhetoric may be extreme, but it reflects the passions surrounding the debate over oil and gas pipelines in Canada. And it may well not be

hyperbole. The Kanastake, after all, are the First Nations band that rose in armed revolt against Quebec and the federal government in 1980 over a developer’s efforts to build a golf course and condominium complex on a burial site in a sacred pine grove next to their reserve. The two-and-a-half month standoff ended when the Kanastake surrendered to police.

Now that President Obama has shot down the contentious Keystone XL Pipeline — which would have transported oil from the tar sands of northern Alberta to refineries on the U.S. Gulf Coast — the spotlight is turning to Energy East. Proposed by TransCanada, the same company behind Keystone XL, the Energy East Pipeline is the next most likely conduit for what is known as unconventional crude. It would run from Alberta nearly 3,000 miles east to ports in Atlantic Canada, snaking across territory claimed by some 150 First Nations groups.

The involvement of these First Nations bands in the Energy East battle may well be the trump card for pipeline opponents, which include

Involvement of First Nations bands in the Energy East battle may be the trump card for pipeline opponents.

Canadian and U.S. environmental groups. The bands have real leverage, claiming that TransCanada must secure their permission before building pipelines on their lands — a claim the company disputes. Some bands, like the Kanastake, have vowed to block the pipeline at all costs.

Opposition from First Nations communities is one of the main reasons why what was once considered the top prospect to carry tar sands crude — the Northern Gateway Pipeline, proposed by Enbridge Inc. to travel from Alberta some 730 miles to a tanker port on Canada’s West Coast — now appears to be moribund. The pipeline would have crossed the lands of more than 130 different First Nations, some of whom also promised armed resistance, and required oil tankers to navigate the ecologically sensitive and stormy Hecate Strait, a traditional First Nation fishing grounds.

The Energy East Pipeline is different from Keystone XL in one major respect — it’s an all-Canada line, and needs no approval from an American president. The 42-inch-diameter pipeline, if built, would be one of the

NEB
The proposed route of the Energy East Pipeline, which would transport heavy crude oil from Alberta’s tar sands nearly 3,000 miles to a port in St John, New Brunswick.

largest by volume in North America, able to transport 1.1 million barrels of tar sands crude per day, nearly a third more oil than was proposed for Keystone. The pipeline would leave the oil tank farm of Hardisty, Alberta, head south, then quickly dog-leg to the east across Saskatchewan, Manitoba, Ontario, Quebec, and New Brunswick to tanker loading facilities and refineries in eastern Canada.

Most of Energy East would incorporate existing gas pipeline that will be “repurposed” to carry diluted bitumen, or dilbit, which is what producers call the molasses-like tar sands crude from northern Alberta. New pipeline would be constructed through the eastern half of Quebec and the Maritime provinces.

While it avoids a U.S. crossing, Energy East still has plenty of opposition, both inside and outside Canada, because it would provide a way for much larger amounts of the landlocked tar sands oil to find a way to export markets. This would likely mean an expansion of tar sands mining, although the recently elected premier of Alberta has announced a sharp change of course in climate policy from the previous conservative provincial government, including a limit on tar sands carbon emissions.

Many opponents say it’s time to put an end to projects such as the tar sands and Energy East. “The endless expansion of the fossil fuel industry is the thing that makes the math of climate change impossible,” climate activist Bill McKibben said. “And we’re fighting that tooth and nail.” His group, 350.org, is now taking on Energy East and is working with Clayton Thomas-Muller, a Cree from a northern Manitoba band, the Puktawagan. Thomas-Muller is organizing First Nations across Canada to fight Energy East and the tar sands.

Energy East would cross 961 separate bodies of water, including major rivers such as the St. Lawrence.

In addition to the large-scale CO2 emissions associated with the Energy East Pipeline, another major issue is the threat to the many streams and lakes it would cross. Canada has 20 percent of the world’s freshwater, and Energy East would cross 961 separate bodies of water, including major rivers such as the St. Lawrence and Rideau, according to the Council of Canadians, a national environmental group. TransCanada touts its high-tech leak-detection systems. But last summer a state-of-the-art-Nexen pipeline ruptured and spilled a million gallons of gooey, heavy crude into the boreal forest in northern Alberta, and the spill went undetected for two weeks.

If it gushes into a creek or lake, dilbit, much heavier than conventional crude, quickly sinks and is far harder to clean up. Five years after the spill of more than a million gallons in the Kalamazoo River from a pipeline rupture, thick deposits of dilbit still lie at the bottom, impossible to remove. The cleanup has already cost more than $1 billion.

And while some of Energy East’s pipeline is modern double-walled pipe, about 80 percent of the repurposed pipe is 40 years old and has a much thinner single wall, about the width of a pencil. Because of its viscosity, dilbit is pumped under more heat and pressure than conventional crude, and some critics contend it makes the pipe more susceptible to rupture, though one U.S study says that is not the case.

Moreover, opponents have raised questions about the chemicals mixed with the heavy crude to help it flow, called diluents. TransCanada won’t reveal what diluents it uses, calling it proprietary information. But it’s

First Nations have been up against formidable opponents in their pipeline battles.

likely that benzene, a known carcinogen, is one of them, experts say.

The opposition also is concerned about increased oil tanker traffic in the waters off eastern Canada. TransCanada just canceled plans for a loading facility near Riviere-du-Loup in Quebec because it would have been situated in beluga whale habitat. But as planned, the overall project would significantly increase tanker traffic in the Bay of Fundy, which has the highest tides in the world and is home to endangered northern right whales — one of seven whale species there — and a thriving commercial fishery.

In recent years, First Nations have been up against formidable opponents in their pipeline battles, especially the recently defeated Conservative government of Stephen Harper. “He rolled back much of Canada’s environmental law,” Thomas-Muller said. “But the one area they haven’t been able to take away is the powerful legal regime of aboriginal law. That’s why First Nations are at the forefront of this battle for civilization and the most successful environmental campaign in history.”

Harper was also able to pass C-51, widely considered a draconian anti-terrorism bill, styled after the Patriot Act, which included in its definitions of terror anyone who interferes with “critical infrastructure” or the “economic and financial stability” of Canada.

The Conservatives were defeated in October elections, and that has changed the political landscape on energy development, though precisely how remains to be seen. The Liberal Party, which came to power, voted for C 51, but has said it will amend it. The new prime minister, Justin Trudeau, has struck a far more accommodating tone with environmental groups and, according to Serge Simon, “made significant overtures to First Nations.”

Still, the oil industry remains one of Canada’s largest economic sectors and it needs pipelines to export its product. Trudeau supported the Keystone XL Pipeline, but didn’t weigh in on Energy East during the election campaign. In early November his foreign minister, Stéphane Dion signaled that the new government is behind Energy East — with caveats. “We support this,” he told the Toronto Globe and Mail. “But we want it to be done properly, and it will be difficult to do if we don’t strengthen the process… of communications with communities and the process of

‘We’ll do what we can to stop it,’ one Mohawk leader says of the pipeline. ‘The community doesn’t want it.’

The area where the Energy East pipeline would pass through Kanastake territory is a beautiful region of provincial parks, rolling green hills, farms and orchards at the confluence of the St. Lawrence and Ottawa Rivers. It also would run along the Lake of Two Mountains, which, besides recreation, also provides drinking water to much of this part of Quebec.

Many officials in Quebec and Ontario have signaled their opposition to the pipeline, saying it’s more trouble than it’s worth. First Nations groups are especially riled about Energy East after losing the battle over pipeline 9b, an Enbridge gas line in Quebec that was built to carry light crude but will be used for heavy tar sands crude.

Another Mohawk band to the south of Montreal also is fighting Energy East. Clinton Phillips, who administers the land portfolio for this band, was raised a Catholic and attended a Catholic church in Kahnawake, built by Jesuits in 1656. As he walked through the church and looked at the stations of the cross, their titles written in Mohawk, he talked about how much it meant to him when Pope Francis issued his encyclical on the environment

Not on This Land: A Western
Tribe Says No to Big Coal

The Northern Cheyenne are opposing a proposed railroad that would cut through their ancestral lands to haul Montana coal to the Pacific coast. An e360 video reports on the Cheyenne’s fight against the railroad and the extraordinary coalition of tribal people and ranchers who have joined together to stop the project.
READ MORE

earlier this year. Coupled with the traditional aboriginal respect for the land, he said, “We’ll do what we can stop it [the pipeline]. The community doesn’t want it.”

TransCanada is undeterred. “Pipelines are the safest and most efficient way to move products like oil, especially large volumes, over longer distances,” TransCanada spokesman Davis Sheremata said in an email. “Everyone who transports products like oil wants to see it done safely and efficiently.”

The First Nations of Canada are now emboldened. The price of oil has fallen precipitously, their archenemy Harper is gone, and the realization that the world is rapidly warming is growing. With October’s dramatic election outcome, the Canadian energy battlefield has tilted in their favor. But none of the First Nation pipeline opponents believe the fight over Energy East is over.

“We’re the doorway,” said Simon. “If we stop it here it won’t happen. So we’ll continue fighting.”