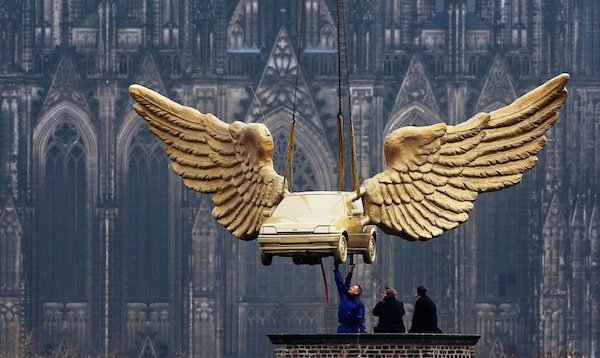 Can autoworkers save the climate?

At the COP 19, the even-more-depressing-than-usual climate summit that took place in Warsaw in 2013, one small ray of light made it through the dark corporate clouds that were otherwise suffocating even the slightest effort to address the ongoing environmental disaster.

On the last day of the conference, an unusual alliance was formed as environmental organizations and trade unions together walked out of the venue under the banner of “Enough Is Enough.” Sick of the meaningless talks, they stated:

We are now focusing on mobilizing people to push our governments to take leadership for serious climate action. We will work to transform our food and energy systems at a national and global level and rebuild a broken economic system to create a sustainable and low-carbon economy with decent jobs and livelihoods for all. And we will put pressure on everyone to do more to realize this vision.

If not entirely unique, this action nevertheless promised a new hope for a climate movement that never recovered after its (greatly exaggerated) expectations cruelly disappointed at the summit in Copenhagen four years earlier. The relationship between trade unions and environmentalists has often been strained, if there has been one at all. More often than not, those claiming to defend the earth and workers’ rights are operating at a crossroads, sometimes colliding in head-to-head confrontation — especially when jobs are pitted against environmental interests.

I found myself in that squeeze when the financial crisis hit the auto industry in 2008. The previous year, Al Gore and the Intergovernmental Panel on Climate Change (IPCC) were awarded the Nobel Peace Prize, and climate change topped worldwide headlines. But with the bankruptcy of Lehman Brothers and the auto industry in free fall, the climate crisis quickly disappeared from general discussion, even more so among auto-industry workers. Profits (disguised as “jobs”) were the main issue, not the complicated and distant phenomenon of global warming.

This was very much the case in Sweden, a small country with two crisis-hit US-owned car producers (Volvo and Saab), two truck corporations (Volvo Trucks and Scania), and a widespread network of subcontractors, making the industry a pillar of the national economy. In the debate over what to do about the crisis, two positions quickly crystallized in Sweden, much as they did in other car-producing countries:

“Let it die!” This position was represented by true believers of the invisible hand and creative destruction — a rapidly shrinking flock at the time.

“Support the industry!” In most countries, this became the rallying call of unions, social democrats, governments — and, naturally, the industry itself. They advocated subsidies of various kinds, from “cash for clunkers” to the involuntary quasi-nationalization of GM and Chrysler — and to varying degrees, sacrifices from auto-industry workers.

Needless to say, the “Let it die!” position — notoriously articulated in the United States by Mitt Romney — was no alternative for workers. In the case of Sweden, it would have had huge social implications in an economy in which unemployment was already skyrocketing, particularly in an auto-dependent city like my hometown, Gothenburg.

It also would have caused enormous social waste. The auto industry is not merely buildings, robots, and assembly lines: it’s first and foremost an organization of people, who together make up an industrial machine built and perfected for more than one hundred years.

“Let it die!” targets not just the metal scaffolding but the human component of the industry. And from a working-class point of view, it would have dissolved autoworkers as a collective and the potential social subject for change.

If cars were a social necessity, I wouldn’t per se be against the second position of “support the industry!” Governments support all sorts of things, like education, health care, culture, and more (albeit, now less than ever). The problem is that cars are unnecessary. The present transportation system, based on mass auto transit, is completely unsustainable. It is a threat to humanity.

Transportation has been growing faster than the rest of the global economy, pushed forward by globalization, just-in-time production, and car-centered city planning — all based on the abundance of cheap fossil fuels.

This is not news to the auto industry. After a brief flirtation with denialism, auto makers quickly adapted to equipping products with stickers proclaiming them “green,” “eco,” or some other environmentalist catchword.

The main lines of defense of the status quo have been fuel-efficient cars, bio-fuels, and electric cars. And it is true: the average of CO2 emissions per mile from new cars is going down. But this is thoroughly overcompensated by the increasing number of miles covered by an ever-growing global fleet of cars.

As for bio-fuels, there is simply no way to substitute bio-fuels for fossil fuels at the present scale of consumption. No serious assessment gives them more than a minor role in propelling the world’s cars. Moreover, even if the blame for the 900 million undernourished, or starving, in the world today is to be found more in distribution than absolute scarcity of food, production of bio-fuels for cars — more appropriately named “agro-fuels” — is a deeply questionable way of using the world’s arable land.

Then there’s the electric car. The car of the future — clean, silent, magically propelled by electric energy — a technical fix, now as always, just around the corner, telling us that if we act like responsible consumers, there’s really no need to worry. It will be possible to maintain the auto society (and the auto industry), making effort to imagine alternatives unnecessary.

But electric cars don’t represent a way out of the fossil society — not today or in the foreseeable future. Electricity doesn’t appear out of thin air. Two-thirds of electrical power in the world comes from burning coal, oil, or natural gas, in most cases making the electric car slightly more efficient than the fossil car, a showpiece used to greenwash the auto industry and lull us into the dream that the environmental problems of road traffic will soon be taken care of.

Furthermore, since the production of an electric car generates considerably more greenhouse gas than the manufacturing of a conventional one, it has to run on renewables for tens or hundreds of thousands of miles before it is any better for the environment than a regular car.

The talk of the green fuel-efficient car running on renewables is an illusion. Instead, the transportation system has to change in three ways: from private to public, from roads to rail, and, above all, transport has to be drastically reduced.

These, of course, have huge implications for the auto industry. It’s just not possible to keep producing 70 million units a year. Basically, a transition to an economy that does not systematically destabilize the earth’s climate would entail the end of the industry as we know it.

So facing a choice — between seeing the jobs of my coworkers and myself go down the drain or demanding subsidies for pushing the earth further down the highway to hell — I opted for “none of the above.” Instead, I’ve been arguing for something I call “conversion”: that is, transforming the auto-industrial complex to save jobs and the planet.

At first, the idea was more of a quick one-liner when journalists asked me to comment on the crisis, but, as I dug deeper, I found the case for conversion was very strong — that it’s actually a viable strategy against both unemployment and climate change, both practically and politically.

First, breaking free from the fossil economy requires more than a mental or emotional commitment to the idea (though even that commitment is deplorably absent). Its material components, such as the present means of transportation and energy production, would have to be replaced. This has to be done quickly and on a massive scale.

And if there is one thing the auto industry is good at, it’s mass production of technically complex equipment. The assembly line was perfected in this pursuit. Mass production turned the car from a luxury item into the means of transportation in industrialized countries and the foremost symbol of mass consumption.

Second, conversion of the auto industry is technically feasible. If mass production is the auto industry’s first basic feature, change is the second. Ever since GM overtook Ford using a never-ending flow of new models as a method for marketing cars, the constant change of products has been an industry hallmark. Through the marketing genius of GM’s Alfred Sloan, the auto industry became the birthplace for “conspicuous consumption” on a broad scale. New models were launched every year to make last year’s model outdated.