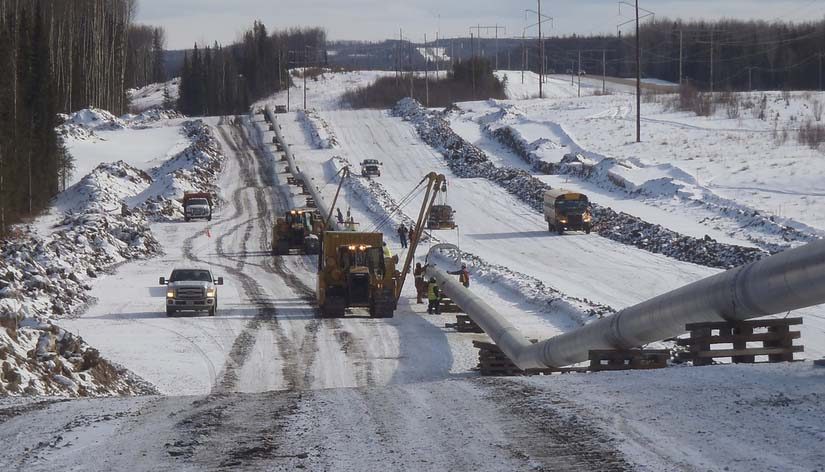 Statement of the Vancouver Ecosocialist Group, May 28, 2014

Last month, four leaders of the main construction unions in British Columbia issued a statement in support of the Northern Gateway tar sands pipeline. The statement is signed by the Teamsters, Plumbers, Operating Engineers and Labourers’ unions. The text is enclosed below.

These two statements are an occasion to remind ourselves of why we should oppose the climate-wrecking agenda of the fossil fuel industry and its government backers. We believe there is a better way forward for unions and for society.

Climate science is telling us that society must move rapidly to reduce its greenhouse gas emissions. That means lessening and eventually eliminating most extraction and burning of fossil fuels. We must end the reckless and excessive production and consumption of ‘things’ that only serves to fill the pockets of large corporations. We believe the unions in BC as well as the political party they support, the NDP, should be developing audacious policies for the alternative economy that is needed. But instead, the opposite is happening:

* Many BC unions are supporting a key part of the fossil fuel industry agenda—increased fracking of natural gas in the northeast of the province and the creation of an entirely new industry, LNG, on the northwest coast. First Nations in the northeast say that fracking is destroying their air and water as well as the fish and wildlife they have depended upon for millennia. A new report of the prestigious Council of Canadian Academies is another reminder of the dangerous environmental consequences of fracking. We should heed these voices.

* Another industry—export of thermal coal (mined in the U.S.)—is surging ahead. Instead of more coal, we need more action on transition to a renewable energy economy. Unions have a vital role to play in assuring that new jobs for coal miners and new economies for their communities are created.

* And finally, there are the two proposed pipelines to carry Alberta tar sands bitumen to the BC coast. Awareness and concern over Kinder Morgan’s Trans Mountain line is growing, as evidenced by the big rally that took place in Burnaby on April 12, organized by Burnaby Residents Opposed to Kinder Morgan (BROKE). In northern BC, meanwhile, residents of the province might have hoped that Enbridge’s Northern Gateway pipeline will be consigned to the dustbin, once and for all, following the April 12 plebiscite vote in Kitimat against it. The project is already facing the ‘Wall of Opposition’ that First Nations peoples and other residents in northern BC have created. But Enbridge is pressing ahead, and it has the federal government in its back pocket, so we are obliged to continue to organize against it. On May 10, thousands of people rallied in Vancouver and across British Columbia to say ‘no’ to tar sands pipelines.

Trade union and NDP leaders should pay heed to the opposition to Northern Gateway by First Nations, by the citizens of Kitimat (who voted by 58 per cent against the project on April 12) and by growing numbers of citizens in the Lower Mainland and along the pipeline routes.

The Northern Gateway statement follows upon a memorandum of understanding signed by Enbridge Inc. (the parent company of the project) and the four unions on April 15 in support of the pipeline and vaunting the job opportunities it will create. No doubt, that ‘positive’ message was a consequence of the blow that Northern Gateway received from the plebiscite in Kitimat and the follow-up vote by Kitimat District Council to oppose it.

The letter says, “…And our precious natural environment — on land and on water — will be safeguarded with the toughest environmental standards ever applied on an oil pipeline.” We disagree that Enbridge and the federal government can be entrusted to protect land and water. The same union leaders are supporting another fossil fuel megaproject that will be highly destructive to air and water–natural gas fracking in the BC northeast and liquefied natural gas on the coast.

Late last year, Unifor, teachers and other unions in BC signed the Save The Fraser Declaration, a landmark statement first issued three years ago that opposes Northern Gateway. The Declaration affirms the importance of preserving and protecting the Fraser River watershed and the coastal waters and lands of the Pacific Northwest. Unions are beginning to speak out against the Trans Mountain pipeline. Two national unions—CUPE and Unifor—took stands at their national conventions last year against oil and gas fracking.

All this and more is a good foundation for us to build upon. We know that workers and union members in the province want a healthy future for us and our children. So we need to fight for a different kind of economy and world, one in which the needs of every human can be met without trashing the planet on whose health we all depend for our survival. That includes insisting that workers displaced by economic changes be guaranteed training and alternative replacement income and employment.

‘Jobs’ and ‘the environment’ are not either/or propositions. As a current saying has it, ‘There are no good jobs on a dead planet.’ It so happens that the most plentiful and the most satisfying of jobs–the only ones that mean anything in the long term–are those that will meet our duty to care for and nourish our natural surroundings and our fellow human beings.

If it’s built right, this can set us up for next century

Canada’s trade union movement has always fought to ensure working people and their families benefit from economic growth. That basic value helped to build the country we love with a strong middle- class, good public services, and protections for workers. And it’s why the four national unions — and the 300,000 Canadian working women and men we represent have signed a Memorandum of Understanding ( MOU) with Northern Gateway Pipeline.

Northern Gateway is a nationbuilding project that has the potential to secure long- term energy and economic security for the next 100 years. But only — and this is critical — if it is built right and for the benefit of average families and the communities in which we live.

That is what the MOU we have signed is all about: building a project that benefits hardworking Canadians, supports local economies, and protects our natural environment.

The MOU ensures that our members — the most experienced pipeline construction workforce anywhere in the world — are able to build Northern Gateway to the highest possible safety and environmental standards. As a result of the MOU, trade union members are guaranteed a minimum of 2,100 person years of employment on the project. It also guarantees that our workers will be protected with strong health and safety rules. And when our members benefit with good paycheques, good jobs, and good benefits, our families and the communities we live in benefit too.

In addition, the MOU supports Northern Gateway’s commitment to jobs and lasting social benefits for aboriginal communities. It helps ensure new training opportunities for young people — opportunities that will last them a lifetime. Already, because of programs sponsored by Northern Gateway, hundreds of Northern British Columbians — including those in Aboriginal communities — are learning new skills, and preparing for new careers.

As trade union members, we also place a high value on protecting our natural environment. The trade union movement in Canada is at the forefront of environmental protection, building alliances with environmental organizations to create green jobs and a greener future for our country.

The independent review conducted by the Joint Review Panel of the National Energy Board was the most comprehensive environmental review for an oil pipeline Canada has ever seen. And the 209 tough conditions that panel put on the project place a high priority on environmental and social values.

The bottom line: We are confident that Northern Gateway will be a project that is economically and environmentally responsible. Working people will benefit with good jobs, good paycheques and good protections. Communities will benefit from those jobs and the enormous economic activity they will inject into the local economy. Aboriginal and First Nations communities are owners of the pipeline through groundbreaking equity partnership agreements. And our precious natural environment — on land and on water — will be safeguarded with the toughest environmental standards ever applied on an oil pipeline.

For these reasons, our trade unions are proud to support Northern Gateway. Because when working people and their communities benefit — as they do with this project — then we all benefit with a stronger, fairer, and more prosperous country for every Canadian, in every part of the county.