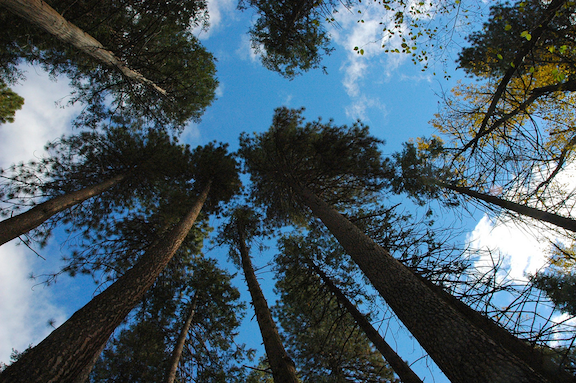 California’s forests are feeling the heat

Climate change is already taking its toll on forests, according to recent studies. This week, a study published in the Proceedings of the National Academy of Sciences found that in California forests, the numbers of large trees, including pines and the iconic sequoias, have dropped by 50 percent since 1930.

The scientists noted that a number of factors contributed to the trees’ decline. “Older, larger trees are declining because of disease, drought, logging and other factors, but what stands out is that this decline is statewide,” Patrick McIntyre, study author and data manager for the California Department of Fish and Wildlife, said in a statement.

While all these factors played a role, the scientists were able to show that water availability was the number one contributing factor. In regions where drought has been the most severe, like Southern California, up to 70 percent of the big trees have died off.

The scientists also found that while big trees are becoming scarcer, they are being replaced by smaller, more densely packed trees, like oak, which can withstand warmer temperatures and less water. But it is not an equal trade; overall, California’s forests ended up with 19 percent less biomass.

The loss of these big trees affect the entire forest’s ecosystem, including the birds, insects and mammals that live there and rely on the trees’ dense cover. Another major concern is the trees’ role in removing carbon dioxide from the atmosphere. Losing or even replacing them with smaller trees could in fact exacerbate climate change.

“Loss of these big trees and the impact of drought stress become a big concern going forward in terms of its impact on the carbon cycle; they can turn a carbon sink into a source of carbon released to the atmosphere,” said David Ackerly, a professor of integrative biology at UC Berkeley and co-author of the study.

California is not the only state where a shifting climate is projected to change forests. In the northeast, oak and hickory are expected to displace the now dominant maple, beech and birch trees. In Alaska, white spruce trees are not growing as large, due to warmer temperatures and drought.

Canada’s boreal forests are also suffering. A study published last year by the Canadian Forest Service, found that melting permafrost, drought and insect outbreaks due to warmer temperatures are all contributing to the demise of the boreal forests.

With deforestation increasing in the Amazon and 2014 the hottest year on record, things are not looking up for the world’s forests. But, hey, at least the Senate has finally agreed that climate change is real.