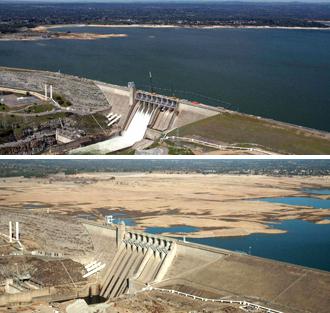 Ragina Johnson explains why water supplies are drying up in the state that is home to one in eight Americans–and what needs to be done to press for an alternative.

JAY FAMIGLIETTI, a senior water scientist at the NASA Jet Propulsion Laboratory in California, made a dire warning in March–there is only one year’s worth of water left in the state’s reservoir storage and river basins. Not only that, Famiglietti said, but even nature’s oldest water backup supply–groundwater–could be gone soon after the reservoirs dry up.

Some 38.8 million people live in California–or about one in every eight people in the U.S. population. California also produces many of the food products that make it to people’s tables across the country and the world. So people are rightfully fearful.

The California drought is throwing the ecology of the state and the region into crisis, and ordinary people are scrambling for ways to help. Many restaurants have stopped serving table water unless requested by customers. People have stopped flushing toilets willy-nilly, are taking shorter showers, and aren’t washing their vehicles as often.

The media are filled with advice about how individuals can change their lifestyles and personal habits to help alleviate the water crisis, one gallon at a time. But this avoids the bigger questions about what is causing this drought–and what can be done to improve the situation.

SCIENTISTS RECOGNIZE that the “mega-droughts” of the Western U.S. are the result of climate change–which is producing record-high temperatures on the West Coast along with historic cold winters and “mega-storms” on the East Coast.

In a 2014 article assessing the history of droughts in California, NASA research scientist and oceanographer Bill Patzert explained how global warming is intensifying the effects of cyclical climate events:

A phenomenon known as a “negative Pacific decadal oscillation” is underway–and that historically has been linked to extreme high-pressure ridges that block storms. Such events, which cause pools of warm water in the North Pacific Ocean and cool water along the California coast, are not the result of global warming. But climate change caused by the burning of fossil fuels has been linked to longer heat waves. That wild card wasn’t around years ago.

2015 is looking like it will be even worse than 2014. Rainfall in California is at a record low. Scientists, using tree ring data going back hundreds of years, have calculated this year will be the driest in 434 years.

Snowfall has also been abysmal. The California Department of Water Resources reported that snowpack in the Sierra Nevada Mountains, which naturally refills reservoirs when it melts in the spring and summer, is at between 16 and 22 percent of normal levels.

That isn’t the end of the problem, by any means. Less snow means more wildfires, which are already sweeping across the state at higher-than-average rates. Fires have destroyed 3,200 acres since the start of the year, with the main fire season of the year still to come.

All this will continue to have an impact on crops that are central to industrial food production in the U.S. As the U.S. Department of Agriculture reported in 2014:

The ongoing drought in California–with the driest year on record for the state following several prior years of drought–is likely to have a major impact on the state’s agricultural production in 2014. Despite a relatively recent series of major storms, long-term moisture deficits across most of the state remain at near-record levels. Because California is a major producer in the fruit, vegetable, tree nut and dairy sectors, the drought has potential implications for U.S. supplies and prices of affected products in 2014 and beyond.

Fruit, tree nuts, and vegetables play a dominant role in California agriculture, and California producers account for a large share of U.S. production of many products in these categories. More than half of California’s agricultural crop value comes from fruit and tree nut production ($15 billion average for 2010-12) and about a quarter from commercial vegetables ($6.3 billion, excluding potatoes). These commodities represent over 60 percent of total U.S. fruit and tree nut farm value and 51 percent of vegetable farm value.

Unsurprisingly, most of these reports emphasizing the effects of the water shortage on agriculture production ignore what Sonali Kolhatkar, host of the radio show Uprising on Pacifica’s KPFK, pointed out in a recent Truthdig article: The water conservation measures are aimed at individuals and small businesses, not big agriculture, which sucks up 80 percent of California water to grow crops in a desert.

Kolhatkar argues that the ecological crisis is directly linked to the process of market-driven food production:

That desert is irrigated with enough precious water to artificially sustain the growing of one-third of the nation’s fruits and vegetables, a $40 billion industry.

Think about it. A third of all produce in the United States is grown in a desert in a state that has almost no water left. That produce is trucked from the West Coast all over the country in fossil-fuel-consuming vehicles, thereby contributing to the very mechanism of climate change that is likely to be driving California’s historic drought.

Until last year, California hasn’t had any statewide regulations on drilling deep into ancient aquifers for farmer’s fields. As the water levels have dropped, Central Valley growers have sucked these wells dry in order to produce commodity crops like nuts.

Just how much does it take to grow one almond? Pretty much a gallon of water. One walnut takes almost five gallons of water. Other types of produce grown in California are equally dependent on exorbitant amounts of water to grow–one head of broccoli takes more than five gallons.

ANOTHER INDUSTRY to blame for bringing the crisis to a head is oil and gas. The energy giants have swooped into California over the last couple years to get in on the hydraulic fracturing boom–which, of course, pumps huge amounts of water into the earth to release pockets of natural gas and oil.

Despite reports that land in California is sinking by one foot per year due to reservoirs drying up, investigative reporting has revealed that oil companies have been pumping wastewater from fracking into groundwater reservoirs and wells. There is even talk of pumping this contaminated water into the sea.

As the San Francisco Chronicle reported in an article headlined “Oil waste pumped into state aquifers,” there are further consequences to oil production:

California produces more oil than any state other than Texas and North Dakota, and its oil fields are awash in salty water. A typical Central Valley oil well pulls up nine or 10 barrels of water for every barrel of petroleum that reaches the surface.

In addition, companies often flood oil reservoirs with steam to coax out the valley’s thick, viscous crude, which is far heavier than petroleum found in most other states. They pump high-pressure water and chemicals underground to crack rocks in the controversial practice of hydraulic fracturing. They use acid and water to clear up debris that would otherwise clog their oil-producing wells.

All of that leftover water, laced with bits of oil and other chemicals, has to go somewhere. Pumping the liquid — known in the industry as produced water — back underground is considered one of the most environmentally responsible ways to get rid of it.

According to the Chronicle, California regulators allowed oil companies to fill 170 aquifers that could be suitable for drinking or irrigation with fracking waste product. Companies drilled into close to another 253 wells that the EPA had considered protected because they were potentially usable aquifers.

Another report by NBC News in the Bay Area reported, “State officials allowed oil and gas companies to pump nearly three billion gallons of waste water into underground aquifers that could have been used for drinking water or irrigation.”

Gov. Jerry Brown is expected to sign a bill authorizing $1 billion in spending aimed at alleviating the crisis, and the California Senate approved legislation for spending on infrastructure and aid to communities hit hardest by the water crisis, and for fines punishing the illegal diversion of water that hurt fish.

But the governor and California lawmakers are talking out of the both sides of their mouth when they say they punish illegal “diversions of water,” but refuse to go after oil corporations for contaminating the reservoirs and groundwater.

Brown portrays himself as political leader in implementing environmental practices and pursuing renewable energy. In January, in his inaugural address, Brown proposed an expansion of California’s renewable energy goals, from one-third by 2020 to 50 percent by 2030. But at the same time as Brown boasts about such measures, the California economy has become more integrated than ever in a national boom in fossil fuel extraction.

While Brown does press conferences toting his green credentials, he and other Democratic Party politicians remain in bed with energy corporations that are driving CO2 emissions, and therefore global warming.

WHAT DOES all this mean for people living in California?

There is a struggle ahead, and we need to prepare for it by uniting forces that can take on the corporate leaders and politicians who only think about the bottom line while California burns. Supporters of ecological justice need to envision and fight for sustainable food production, workers’ health and safety and indigenous rights.

It’s estimated that farmers and the agriculture industry as a whole lost $2.2 billion in profits due to the drought in 2014, and 17,000 people were thrown out of work. Rural towns with populations in the thousands, predominantly the working poor, are having to make hard choices about their water usage, while their groundwater and wells are being contaminated by pollution from fracking.

The rights of Indigenous peoples on the Klamath Klamath-Trinity basin, including the Yurok and Hoopa Valley tribes, are coming into the crosshairs as well. California tribes have been fighting for years to protect fisheries and salmon populations–warmer shallower waters cause fish to die off.

Recently, 595,000 acre-feet of Trinity Reservoir water was diverted to the Sacramento Valley and San Joaquin Valley, drawing the reservoir down to near-record lows. This is despite a federal court ruling in 1979 that entitles tribes to “as much water on the Reservation lands as they need to protect their hunting and fishing rights” for “time immemorial.” Threats to the river system will increase as California lawmakers push to build new dams, which have devastated salmon populations historically.

In an interview for an article for the East Bay Express, Hoopa Valley tribal member Dania Colegrove, who is also a member of a grassroots organization called the Klamath Justice Coalition, gave a clarion call for protest that should speak for everyone concerned with ecological justice in California: “It’s going to be a fight from now on.”