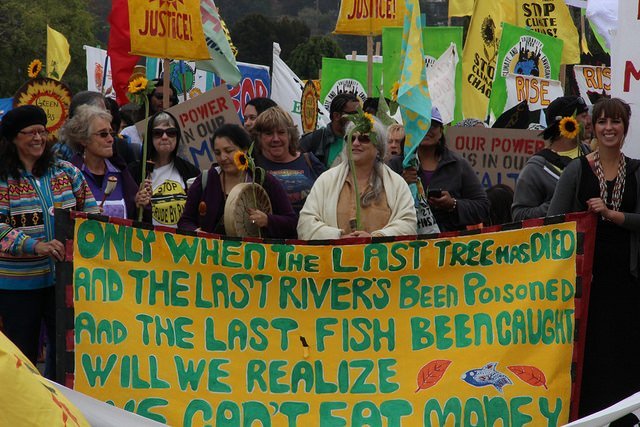 An injunction and a $5.6-million civil suit in damages is what corporate energy giant Kinder Morgan is seeking against blockaders at a court hearing this week.

Since August of this year, a determined group of Burnaby residents have been stopping Kinder Morgan work crews at a designated conservation area within Burnaby Mountain. SFU professor and defendant Stephen Collis explains, “Many of us are increasingly concerned about climate change, issues relating to Aboriginal title, and the erosion of our democratic rights.”

Kinder Morgan’s $5.4-billion Trans Mountain proposal consists of a pipeline carrying over a million barrels of tar sands crude every day from Alberta to Vancouver, B.C. and a tanker proposal that brings more supertankers into the Burrard Inlet. Over 70 per cent of Burnaby residents are opposed to Kinder Morgan’s expansion, and the Tsleil-Waututh Nation as well as the City of Burnaby are challenging the National Energy Board’s decision to allow Kinder Morgan to operate in Burnaby Mountain.

Although media emphasis has been on People’s Climate Marches or symbolic arrest actions, it is sustained grassroots blockades like the one at Burnaby Mountain that are affecting companies’ profit margins (Kinder Morgan has said that project delays due to opposition cost the company $88 million every month). While these diverse strategies are not mutually exclusive, grassroots communities work a lot harder to “prove” themselves before they garner support from the mainstream climate movement and corporate media.

“Mainstream media will never admit that grassroots actions are winning the fight against the extractive industries,” explains Freda Huson, spokesperson of the Unist’ot’en Camp. The Unist’ot’en Camp is at the forefront of land defence struggles in the country, with families living in cabins in the pathway of 10 proposed pipelines, including the Enbridge Northern Gateway and Pacific Trails fracked gas pipeline. As a result of the Camp’s tenacious stand, all of the original investors pulled out of the Pacific Trails Pipeline. “We need more people to trust in their intuitions and go and bravely help out in the frontlines,” Huson urges.

The Kinder Morgan project is part of a matrix of pipelines, refineries and supertankers all geared towards rapid expansion of the Alberta tar sands. Fracked gas pipelines are also a key component of the tar sands infrastructure: up to 60 per cent of fracked gas extracted in Canada is actually used to fuel other parts of the oil and gas industry, including the tar sands.

The most well-known tar sands pipeline is the $5.5-billion Enbridge Northern Gateway pipeline. This pipeline would cross 1,000 rivers and streams through the territories of 65 First Nations from Alberta to Kitamat, B.C., enabling a 30 per cent increase in tar sands production. Emboldened by the Supreme Court of Canada’s Tsilhqot’in decision, the Haisla Nation, Gitxaala Nation, Council of the Haida Nation, Gitga’at Nation, Heiltsuk Tribal Council, Kitasoo/Xaixais Nation, Nadleh Whut’en First Nation and Nak’azdli First Nation have all announced constitutional legal challenges to Harper’s recent approval of the pipeline. Twenty municipal governments and the Union of BC Municipalities also oppose the project.

Another Enbridge project is the Line 9 reversal to transport tar sands crude from Alberta through Ontario to Montreal and then Maine via the Trailbreaker project. With a 160 per cent expanded capacity, Line 9 would travel through or near dozens of waterways and major urban centres including Hamilton, Toronto, Kingston, Cornwall and Montreal. In Toronto, predominately racialized communities are along the Line 9 route; over 60 per cent of those along the pipeline route in Toronto are recent migrants. An Enbridge facility already operates on the edge of Aamjiwnaang reserve, which is surrounded by more than 60 refineries and chemical plants.

Taken together, these are stark examples of Line 9’s environmental racism.

Though lesser known, the $12-billion Energy East pipeline is the largest oil pipeline project in North America. Energy East is a 4,500-km pipeline proposal by TransCanada to transport 1.1 million barrels of tar sands crude daily across 960 waterways from southern Alberta to New Brunswick. Geared for export, two oil export terminals off the St. Lawrence River and Atlantic Ocean are also being proposed as part of the project. According to a Pembina Institute report, the amount of greenhouse gas emissions that would be generated is equivalent to 7 million cars.

Says Ellen Gabriel of Kanehsatàke, a Mohawk community along the route of Energy East, “In the absence of our free prior and informed consent, it would be illegal for the National Energy Board to grant TransCanada an application for Energy East.”

Though there has been a focus on pipeline and tanker projects providing infrastructure to export tar sands to Asia, little attention has been paid to tar sands exports to the U.S. Activists Maryam Adrangi and Syed Hussan write, “Over half of Alberta’s tar sands oil goes to the U.S., making Canada the single largest foreign supplier of oil to the United States.”

The U.S. Department of Defense is the world’s leading single buyer and consumer of oil. With the growing U.S. military industrial complex and its never-ending War on Terror in Iraq and Afghanistan, demands for imported oil have increased. The U.S. Energy Policy Act explicitly designates tar sands production to serve the fuel needs of the U.S. military.

According to the Polaris Institute, Canadian oil exports are the U.S.’s primary source of imported oil, making the Alberta tar sands pivotal for the American military economy.

Movements against tar sands infrastructure are in solidarity with Indigenous communities living around the tar sands in Alberta who are facing slow industrial genocide through soaring cancer rates and poisoned food systems.

In the case of the Lubicon Cree, over 1,400 square kilometres of leases have been granted for tar sands development on Lubicon lands and almost 70 per cent of Lubicon territory has been leased for future development.

The Athabasca Chipewyan First Nation (ACFN) is also right in the heart of this mega industrial project. The ACFN recently announced that they plan to oppose all future tar sands projects proposed within their traditional homelands and have launched a legal challenge against notorious oil giant Shell.

The Beaver Lake Cree nation is similarly taking the government to court for no less than 17,000 treaty violations. They are arguing that tar sands projects are violating their inherent and constitutionally protected treaty rights to hunt, fish and trap.

“From one end of Turtle Island to the other, Indigenous people, people of colour, and our allies have made a commitment that we will stop the capitalist destruction of our Mother Earth. We are holding a line of opposition — with moccasins and boots on the ground,” says Crystal Lameman of Beaver Lake Cree Nation.

Standing with the caretakers of Burnaby Mountain

In the face of unrelenting corporate development, encroachment onto Indigenous territories, imperialist military occupations globally, and state criminalization locally, grassroots movements are persistently mobilizing against the various tentacles of the tar sands industry. A recent report by Energy Economics and Financial Analysis and Oil Change International quantifies lost revenue for the tar sands industry due to movement organizing at $17 billion from 2010-2013.

It is within this broader context that standing with the caretakers of Burnaby Mountain becomes even more crucial; they are after all taking on North America’s third-largest energy corporation on their own terms and winning.

Harsha Walia (@HarshaWalia) is a South Asian activist and writer based in Vancouver, unceded Coast Salish Territories. She has been involved in grassroots migrant justice, feminist, anti-racist, Indigenous solidarity, anti-capitalist, and anti-imperialist movements for over a decade. She is the author of Undoing Border Imperialism (2013, 2014). The column, “Exception to the Rule,” is about challenging norms, carving space and centring the dispossessed.