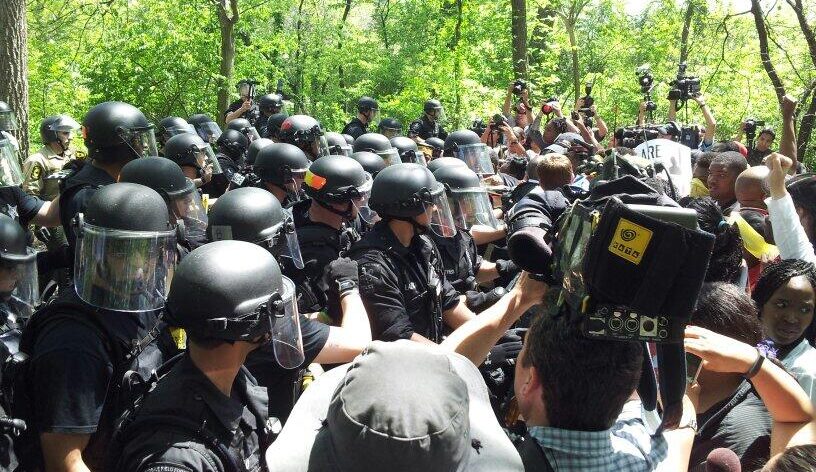 One hundred and one employees from McDonald’s outlets across the country — together with approximately three dozen faith, community and labor leaders — were arrested protesting at the franchise’s annual shareholders meeting in Oak Brook, Illinois, Here’s what McDonald’s HQ looked like this afternoon:

This is how @McDonalds responds to their workers demanding #15AndAUnion pic.twitter.com/PpatLukqOj

In a statement, protest organizers described the rally and sit-in that transpired:

In all, more than 2,000 workers, clergy and community supporters marched on McDonald’s headquarters, just hours before the company’s annual shareholders meeting and just a week after strikes and protests rocked 230 cities around the world in what MSNBC called the “biggest fast-food strike ever.” Protests were expected to resume Thursday morning outside the shareholders meeting.

“We went on strike, we protested, we asked politely and now we got arrested to make sure McDonald’s hears us,” said Ashona Osborne, who earns $7.25 at a McDonald’s in Pittsburgh. “I came to McDonald’s shareholders meeting because I want the company to take me seriously and know that I’m a mother who is sick of struggling to support her son.”

Chanting, “Hey McDonald’s You Can’t Hide, We Can See Your Greedy Side,” and “No Big Macs, No Fries, Make our Wage Supersize,” the workers marched onto McDonald’s sprawling suburban campus and held a sit-in, blocking the entrance. . .

. . . Scrutiny on McDonald’s has intensified since the release of a report earlier this month by Demos showing that the fast-food industry has the largest disparity between worker and CEO pay. New York City Comptroller Scott Stringer said that excessive pay disparities “pose a risk to share owner value,” and that conversations around inequality should move into the boardrooms of profitable fast-food companies. In a filing with the Securities and Exchange Commission, the company admitted that the growing and focus on inequality might force them to raise wages.

“The problems of pay disparity in fast food extend beyond the industry to the rest of our economy,” said Catherine Ruetschlin, Demos Policy Analyst and author of the report Fast Food Failure. “Even McDonald’s has acknowledged that rising inequality is a risk to their bottom line, as companies see pay disparity appear as operational issues, legal challenges, and diminished worker and customer satisfaction. Those consequences pose a real risk to shareholders, who have a material interest in addressing the practices that undermine long-term performance of the firm and inhibit stability and growth in the economy overall.”

A campaign that started in New York City in November 2012, with 200 fast-food workers walking off their jobs demanding $15 and the right to form a union without retaliation, has since spread to more than 150 cities in every region of the country, including the South—and now around the world. The growing fight for $15 has been credited with elevating the debate around inequality in the U.S. When Seattle’s mayor proposed a $15 minimum wage earlier this month, Businessweek said he was “adopting the rallying cry of fast-food workers.”

The spread of the worker movement overseas should cause further alarm. International fast-food restaurants are expected to expand at four times the rate of U.S. businesses, according to a recent Merrill Lynch report. And while US sales slump, companies like McDonald’s are relying on growth overseas to boost their bottom lines more than ever.

With more than 33,000 restaurants around the world, McDonald’s is Big Ag’s number-one customer. No surprise, then: Big Ag falls over backwards to meet McDonald’s needs.

McDonald’s demand for high volumes of consistent ingredients created the conditions for the rise of ADM, Cargill, Bunge, Tyson and Monsanto as we know them today.

Daily, McDonald’s sells beef, chicken, potatoes and tomatoes to billions of customers. These staple foods are the building blocks of our meals…and how each is produced is dictated by what McDonald’s demands.

There remains a vast potential for the environmental, food justice, and larbor movement to join forces against McDonald’s and in so doing ensure every worker can put food on the table and that that food is healthy and sustainable.